Don’t get me wrong – I absolutely love haute cuisine, umpteen-course taster menus and the like. But I’m equally at home with a good old, honest, supersized burger and chunky fries. In fact, I’m often a teeny bit envious of the guy who presents the TV show ‘Man vs Food’. In my case, ‘All things big or beautiful’ are the order of the day. Cue the 2012 model Ford Ranger. It’s certainly big. But is it any good? 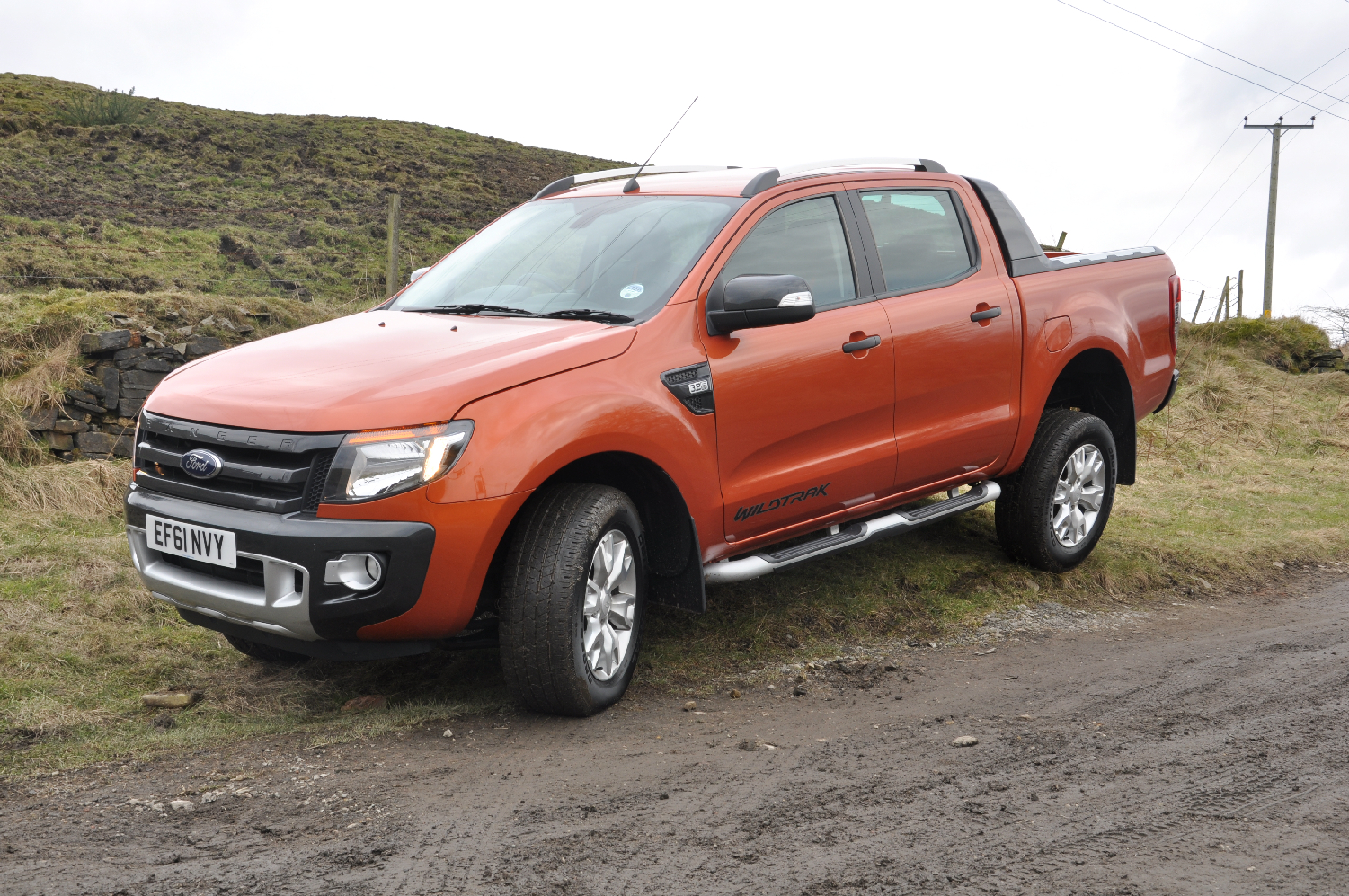 The new, 2012 model year Ford Ranger looks and indeed is much bigger than the previous model – which not only looked somewhat diminutive in comparison to some other pickup rivals of its day, but also looked rather Hillbilly-ish. Not so the new model, which completely dwarfs it and looks nothing but modern. Ford have done a marvellous job of styling the latest Ranger, which looks very American and will no doubt continue to go down a treat in the vehicle’s far-flung markets all around the globe, especially those in which big pickups are the norm.

Okay, the side profile and the rear of the new Ford Ranger look more or less like its equally massive main rivals, the Nissan Navara, Toyota Hilux and Isuzu D-Max. But then they’re all designed to accomplish the same tasks, so I’ve not got a problem with that. And in my view, the styling of the front of the new Ford Ranger, especially in range-topping Wildtrak guise as tested here, blows the competition out of the water. It looks amazing. You’ll certainly never lose your Wildtrak in a car park if you order it with this press vehicle’s bright orange paint job. Nor will you forget what model you own, as Ford have tastefully etched ‘Ranger’ above the front grille, as well as printed it in huge lettering on the back. 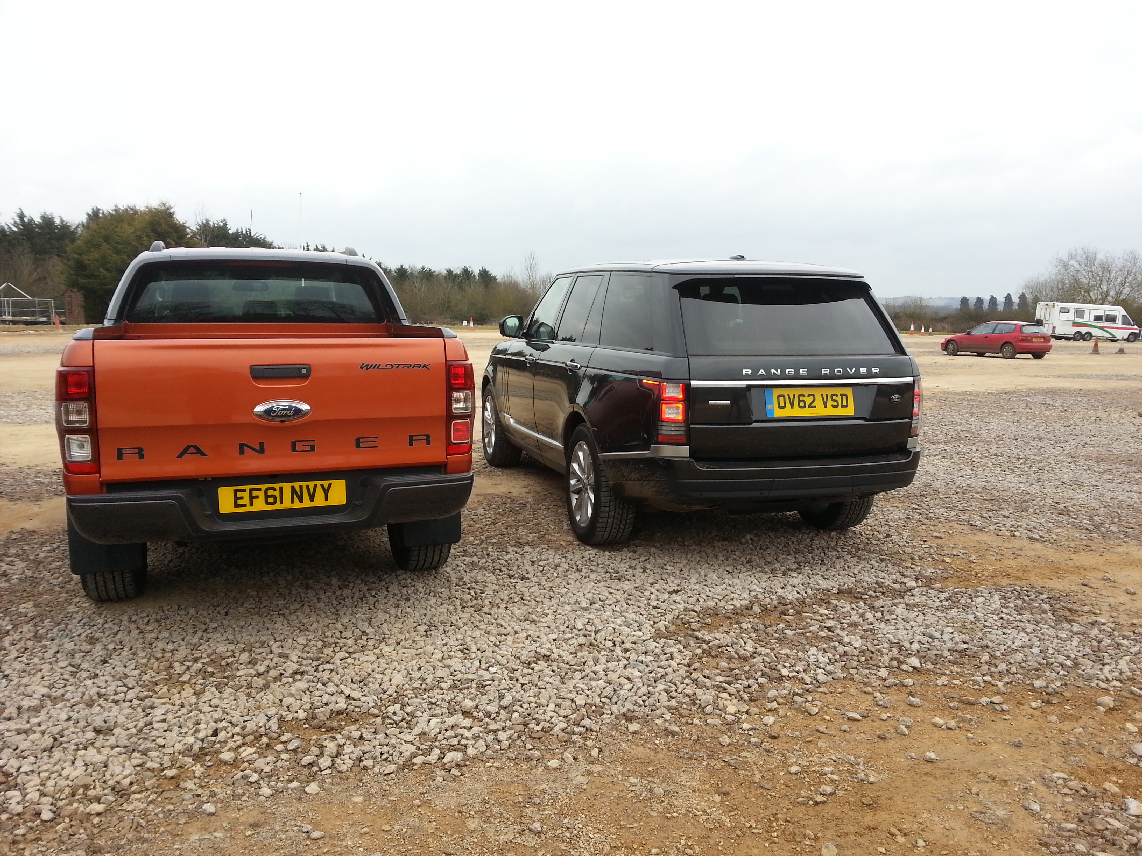 The Ford Ranger means business, which is apparent from the moment you set eyes on it. The gaping wheel arches, large tyres and chunky body panels ooze ruggedness. And the great thing about the new Ranger is that it doesn’t seem to attract the remotest bit of animosity. Neighbours, pedestrians and fellow road-users all looked at the Ranger admiringly and with respect. People realise that it shouldn’t be classed as part of the Chelsea Tractor brigade. The Ranger is, after all, a working vehicle. That said, its modern styling, especially with the Wildtrak styling package, will greatly appeal to ‘lifestyle’ buyers who want a cool, capable vehicle for lugging around canoes, mountain bikes or, err, nothing – if they just want to pose. So no, I really can’t find anything wrong with the new Ford Ranger Wildtrak’s styling – not even the orange!

Inside, the new Ford Ranger Wildtrak is a mixed bag but on the whole, very good. The leather seats are of a decent, hard-wearing quality and look fabulous with their stripes, stitching and Wildtrak logos, all in orange. The Bluetooth system worked effortlessly, the driver’s seat adjusts electrically, the front seats are heated for added comfort, storage spaces abound, there are three 12V aux sockets, a socket for your iPod and a USB connection – and this model came fitted with sat nav. 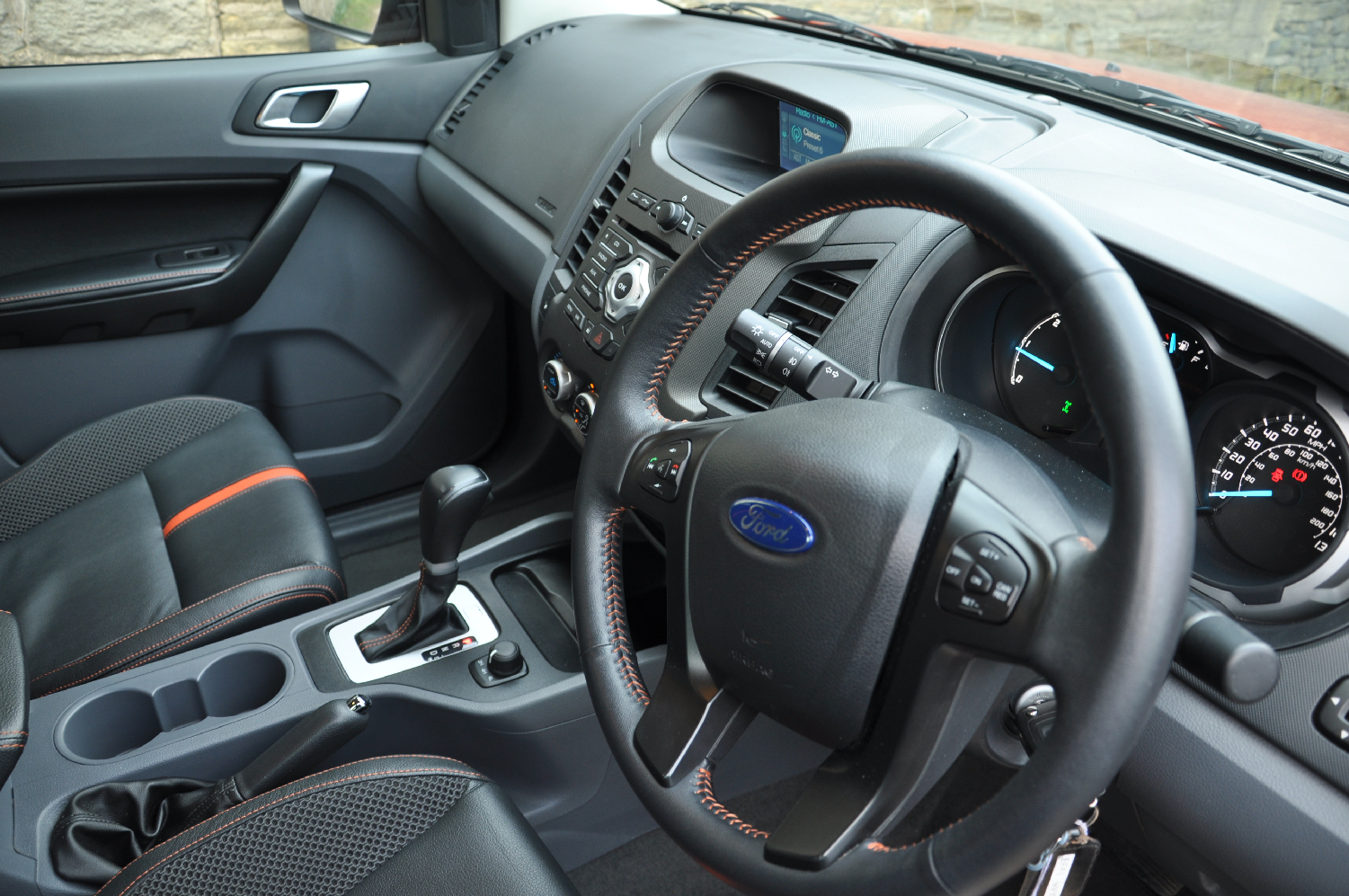 The slight shame is that the quality of the majority of the interior plastics and surfaces isn’t that high, many of them feeling pretty plasticy and cheap. I’ve not driven all the new Ranger’s rivals but am lead to believe the interior quality of the Navara and Amarok is better. Having driven the Ford Ranger down the M6 from Manchester to Gaydon to drive the new 2013 Range Rover Autobiography, it definitely made me ponder on the Ranger’s interior for a while – in a relative sense, of course! But then my mind came round to liking it, as the Ranger is, after all, a work vehicle. Or even if you’re not buying it as a plumber or builder, you might have bought it to take you and your kids or friends windsurfing or trial-biking at weekends. So you wouldn’t want to fret about the interior getting grubby all the time, and in the Ranger, everything is very solid and the buttons, switches and surfaces, although plasticy, don’t feel like they’re going to pop their clogs after only a handful of uses. Most buttons and controls pass the ‘gloves on’ test, too. The ‘Ice Blue’ ambient interior lighting system adds a touch of class to the cabin, and the centre stack with its myriad buttons looks quite futuristic.

Granted, the sat nav screen is comparatively puny and the actual map display looks dated, based on shades of blue rather than full colour. But the sound system packs a decent punch, the Wildtrak tested came with one of Ford’s renowned Quickclear heated windscreens, and there’s acres of leg, head and shoulder-room in the back for three adults. Even a 5-footer was able to get comfortable in the driver’s seat, finding visibility very good. A 6-foot, muscular chap did comment that the front seats lack side support, though – but when you’re driving off-road, you need to have your shoulders freed-up, so we won’t mark it as a negative. 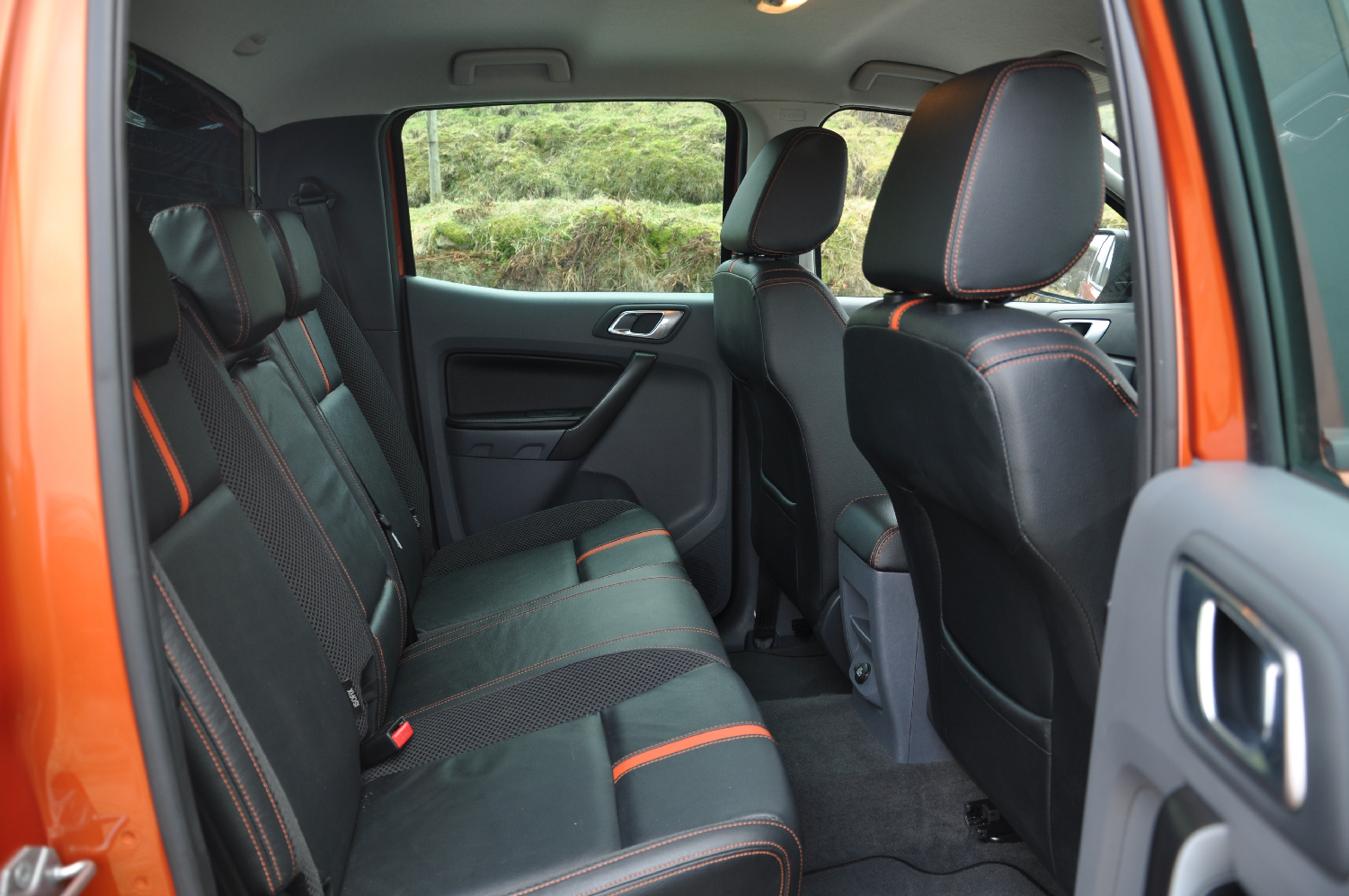 ‘Boot space’ doesn’t come into play, owing to the tested Ranger’s flat pick-up-box rear, but for added carrying capacity, the rear seats fold down as a single bench, although not entirely flatly. The lockable metal tailgate is very heavy, but at least you know it will be as strong as a rock, and there are plenty of hooks and lashings in the back for securing your load, along with a 12V electrical socket (in this vehicle, which was fitted with a bed liner).

Get your stepladders out, climb up into the new Ford Ranger’s towering cockpit, turn the key and, yes, it does clatter into life with a very noticeable diesel sound – but I would call it a reassuring one. After all, if you want a Ranger as a heavy duty pickup for work, or to do off-roading in, it’s sometimes nice to have a reliable diesel sound to inspire you. Yes, the new Ranger is also a lumbering beast and doesn’t exactly whizz out of the starting blocks like Ussain Bolt if you put your foot down. But once again, would you really want to, in such a vehicle? To the new Ranger’s credit, the 200PS 3.2-litre diesel engine and 6-speed automatic transmission are very well suited to each other and once you get going, the Ranger doesn’t whirr, boom or whine like some CVT-like off-road vehicles do – the Shogun I drove in 2011, for example. The Ranger proved much more pleasurable to drive, on A-roads, B-roads, dirt tracks and motorways alike. 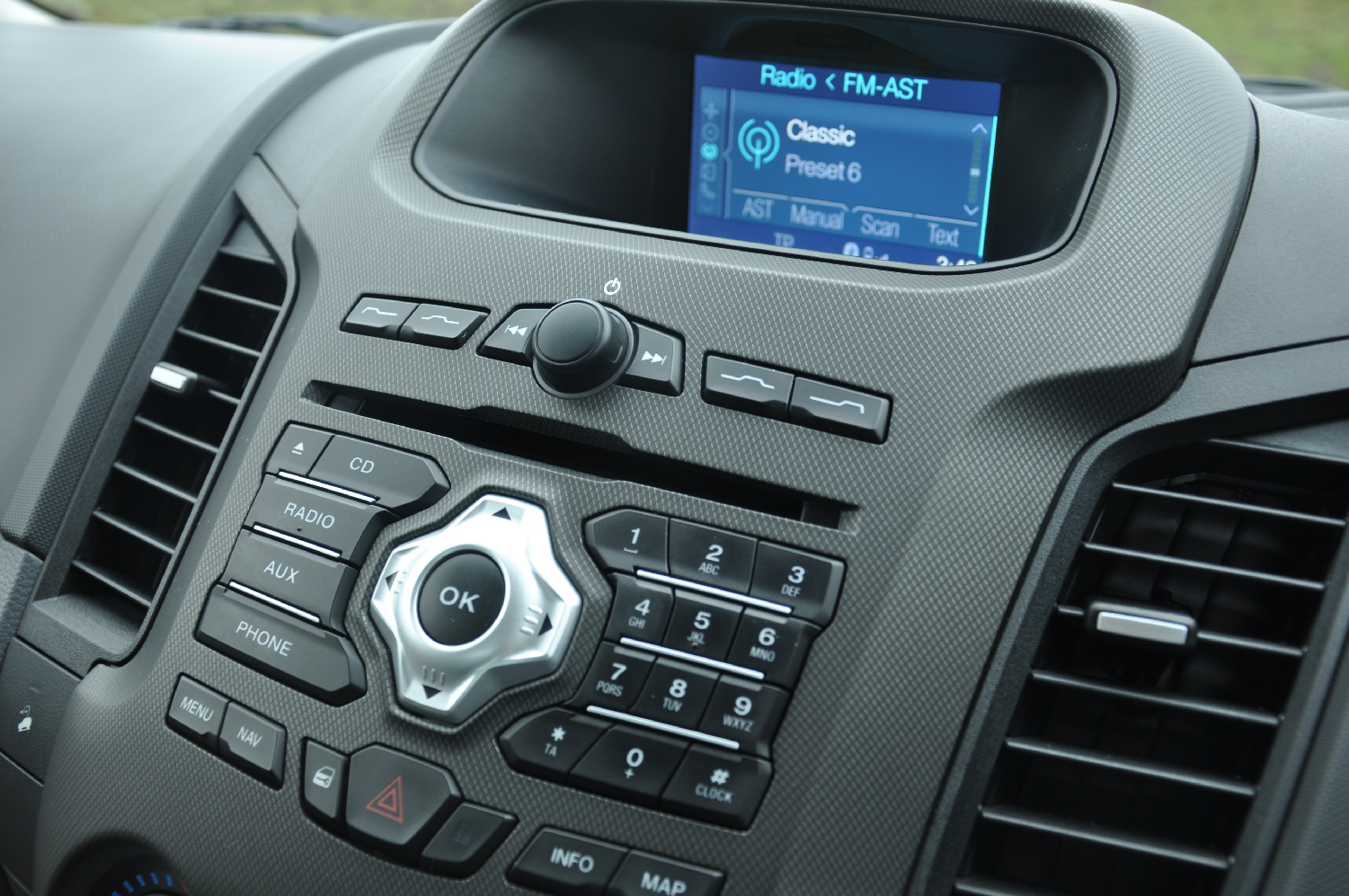 The ride is definitely firm and the new Ford Ranger does bobble and bounce around when you drive along severely undulating country tracks, but around town, it steamrollers over speed-bumps like they just don’t exist. Manoeuvring is made easier by wing mirrors the size of dinner plates, and Ford have integrated a reversing camera into the left-hand-quarter of the rear view mirror. Size really isn’t a problem in that regard, but finding a long-enough parking space in town, or indeed in supermarket car parks, may prove a different matter. The new Ford Ranger handles surprisingly well, with less-than-expected levels of body roll when cornering. I even dared to take a few sharpish corners quite fast and it dispatched them more than adequately.

On the motorway, the ride was generally pretty smooth, but the large mirrors and obvious general bulk of the thing resulted in constant low-level noise, whether it be from the road, tyres or wind. Still, the cabin proved a comfortable place to while away 7 hours on the M6. 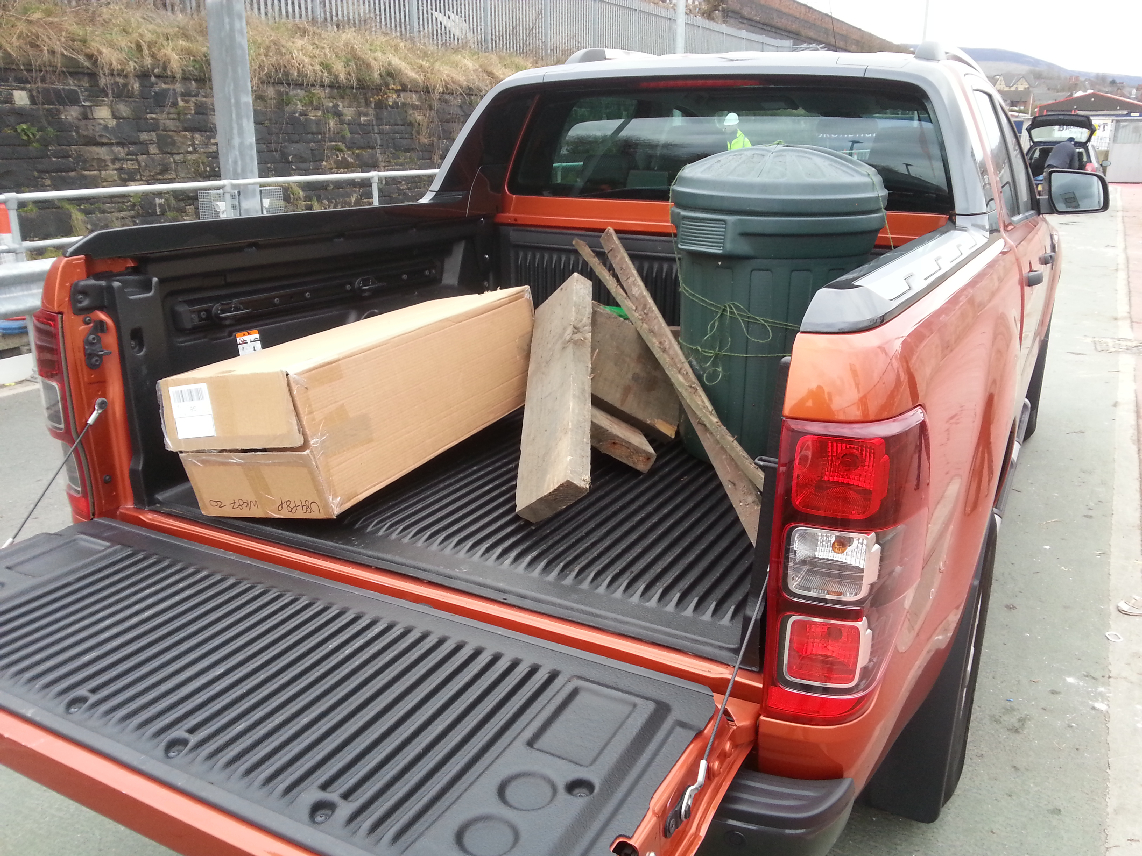 Take the Ranger onto the rough stuff and it copes just like its looks make you think it will. Boulders? No problem. Large, water-filled trenches? Piece of cake. Rugged, loose and rather steep inclines? Again, fine. Naturally, its ability in these areas was improved when I turned the dial into 4WD mode. With the clever electro-magnetic clutch and Electronic Shift-on-the-Fly system, you can switch from high to low ratio while still moving, to suit the conditions, and I must say the axle articulation and traction felt very good at all times. Hill Descent Control and Hill Start Assist are there to prevent you coming a cropper on the slopes.

One figure Ford are no doubt really proud of is that the new Ford Ranger won the coveted ‘International Pickup Award 2013’, and it’s not hard to see why, from my week spent driving one. With 229mm of ground clearance and an 800mm wading depth it can tackle pretty inhospitable terrain. You can carry a payload of upto 1,340kg in weight and tow a braked trailer upto 3,495kg, which are impressive figures. Maximum torque is 470Nm. The front suspension is independent and leaf springs are used at the rear, to prevent suspension turrets eating into the load-bay space. You can customise your Ranger to suit your needs, with optional canopies, roller shutters and the aforementioned bed liner. Service intervals are 1 year or 20,000 miles. 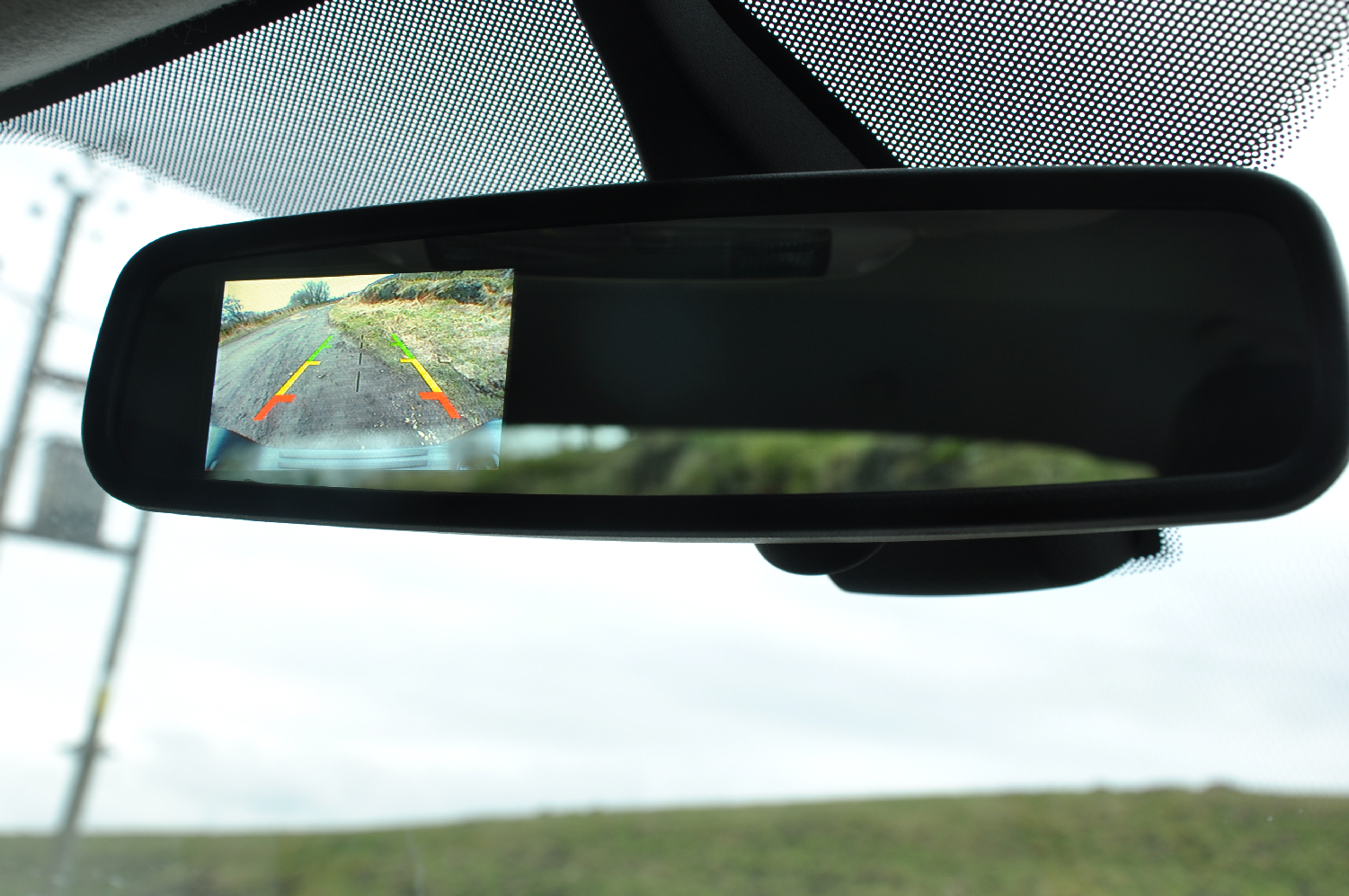 CO2 emissions for the automatic version of the 3.2 diesel Ford Ranger Wildtrak are 274g/km. It can do 109mph as a top speed and get you to 62mph in 10.4 seconds, if you really want it to. And what really did impress me was the fuel economy. Okay, a combined figure of 27.2mpg isn’t great in a general sense, but do remember this is a big, heavy vehicle meant for carrying or towing equally heavy stuff – and what’s more, my week of very mixed driving with the Ranger saw it average 30.2mpg. It’s not often than a press vehicle beats the published figure, so it was a nice surprise. And no, I didn’t drive like your favourite Aunt Maud. I drove as fast as the proverbial next man on the motorway, did a lot of slow town driving and took it onto the rough stuff on a few occasions.

The new Ford Ranger Wildtrak 3.2 automatic weighs in at just over £30,000, price-wise. To compare the Ranger Wildtrak to its rivals, let’s play a quick game of Top Trumps:

So the Ford Ranger Wildtrak loses out when it comes to green credentials, but makes up for it with superior carrying strength and towing power, despite being less powerful than the 3.0 diesel automatic Nissan Navara. If wading is your sole priority, look at the VW Amarok. Oh, and if price is the big concern, have you heard of the Great Wall Steed?

Always remembering that it’s not supposed to be a sporty, sexy SUV to wow fellow golf club members, the new Ford Ranger Wildtrak really did impress me. Aside from there being nowhere to put any shopping when carrying rear passengers (unless you buy one of the lockable covers, that is), the Ranger does a really good job as an around-town companion – well, in a ‘friendly giant’ kind of way. It’s equally commendable on the motorway, especially when cruising along in the highest gear. And it definitely lives up to the hype when it comes to off-road ability. No, it’s not the most economical lifestyle pickup, nor is it the cheapest. But as an all-rounder, it’s very hard to beat and I missed the Wildtrak ever since it left.