Believe it or not, the funky little Kia Soul is now four years old, so Kia decided to give it a bit of a fettle and tweak for 2012. Living with a Kia Soul in ‘Hunter’ spec from their ‘Originals’ range for a week, was Oliver able to see why the Soul has become such a common sight on Britain’s roads? 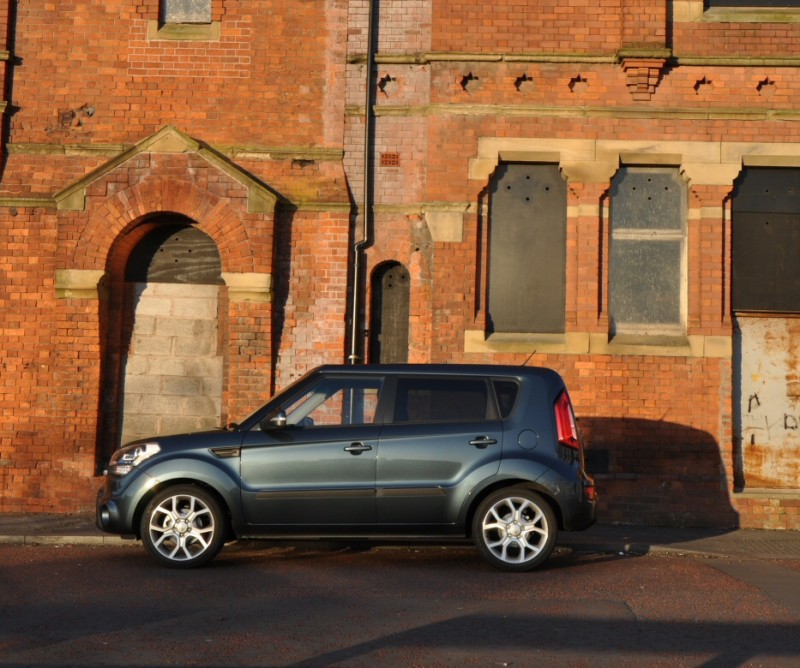 Looking somewhat like a cross between an alien, a robot and an insect from the front, with a boxy and utilitarian but equally funky back and sides, the Kia Soul urban crossover definitely looks the part. For 2012, Kia have improved it on the inside and out, from the engine, gearbox and styling, to the interior trim specifications and quality. When they launched the Soul in 2008, Kia were ambitiously trying to combine the desirability and appeal of cars like the FIAT 500 and MINI with a bit of ‘can do’ SUV image and ability. And I think they succeeded to a large extent.

The Kia I tested for the week featured their new 138bhp 1.6-litre petrol engine which uses direct injection and is mated to a 6-speed manual gearbox. Kia Souls have become a bit of an urban fashion statement for buyers of all ages and Kia know this, so they regularly refresh their ‘Originals’ range with new variants – this ‘Hunter’ spec being one of the latest.

‘Hunter’ adds lovely 18” wheels, LED daytime running lights (so relax – there’s no need to nip to your local auto parts shop and buy some tacky aftermarket ones!) along with rear LED lamps identical to those on the Soul concept car, darkened glass at the back, cruise control, an electric sunroof, new colour combinations, an improved sound system with 8 speakers, heated door mirrors and a rather cool reversing camera which is displayed on the rear view mirror!

My Hunter looked elegant and stylish in Moonlight Blue, which seemed to change from grey to green to blue depending on the light, and complimented the 18” alloys nicely. Whether I was on the move or parked up, the Soul actually attracted quite a few admiring glances from passers-by and I too am an overall fan of its exterior looks, which don’t look out of place in any setting, really.

But on the inside, the Hunter’s black interior complete with sections of black tartan really wasn’t my cup of tea. Okay, some might like tartan car seats, but not me. Two-tone interiors are about my limit. Putting the tartan to one side, what about the rest of the interior? It was the first press car I’d driven for quite some time which didn’t come with sat nav and hence looked a bit bare with just a very simple-looking set of buttons either side of the monochrome screen.

The quality of the dash and other controls isn’t bad in general and everything proved fairly straightforward to operate, but there was nothing about the interior which bopped me on the nose to get my attention. There wasn’t a central storage console behind the handbrake, but a number of other useful storage compartments were dotted throughout the cabin, which is definitely a practical place to be. Everyone from hip city-slicker youngsters to those with families and even senior buyers will find something they like about the Kia Soul’s functional interior.

The Hunter spec’ Soul has a trick up its sleeve too. Engage reverse gear and low and behold, it does have a reserve camera after all! The image is displayed on the rear view mirror, which is really quite clever.

What other features did this model come with? Manual air conditioning, driver’s seat height adjustment, leather trim on the gear lever and steering wheel, a day-and-night and auto-dimming rear view mirror, trip computer, headlight levelling, electric folding door mirrors, luggage nets, an under-floor luggage box, 12V power sockets in the front and boot, a CD-radio system with MP3 compatibility, USB & AUX sockets and an iPod cable, 8-speaker sound system, a Bluetooth phone system, airbags, ABS, ISOFIX tethers and anchors, immobiliser and deadlocks. Safety-wise, ESC and VSM reduce skids and improve stability, whilst the Hill-start Assist Control prevents rolling backwards on slops. During the heatwave we had in March, a welcome feature of the Hunter was its sunroof.

So the Kia Soul Hunter doesn’t scrimp on equipment. How does it drive, though? It’s certainly nice to climb up onto the driver’s seat and assume a high-up, commanding driving position (relatively for a small car like this, anyway). If you previously owned a proper SUV but now you’re down-sizing, you’ll find the Kia Soul a positive move – and the same would apply if you’re used to city cars but want to move up the ladder a bit.

Visibility is great owing to its many windows, large mirrors and height, and parking is made easier courtesy of the aforementioned reversing camera. The 1.6-litre direct injection GDi petrol engine proved to be fairly torquey and nippy around town and was on the whole nice and smooth. Its top speed is said to be 112mph, with 0-60mph possible in 10 seconds and fuel economy of 44.1mpg. I did achieve 41mpg on one occasion, but mixed driving resulted in an average of 38mpg most of the time.

The 6-speed manual gearbox was pleasant to use, without any annoying notches, and was particularly nippy in 4th gear. Working your way up the gears in towns and on A-roads is generally palatable, but I found that the Soul lacked zest on the motorway. The petrol engine isn’t exactly that rapid on motorways and needed to be pushed to build up speed and there was a fair bit of wind and road noise on occasion.

Partly due to the 18” wheels, the Hunter has a firm ride and did crash through potholes and over other poor surfaces, so was a little bit unpleasant at times in terms of ride and refinement. Steering was reasonably responsive but sometimes felt spongy and body roll was noticeable if you pushed the Soul hard round corners. Braking felt a bit of a digital ‘on or off’ affair at times, too. The typical Kia Soul buyer will probably be fairly happy with its overall handling, though.

For cars such as these, practicality is a key requirement and at first glance the Kia Soul’s boot didn’t look that big. I actually doubted if our weekly shop would fit, so I was pleasantly surprised when it did. The Tardis-like boot is quite high so loading-in doesn’t require much back-stretching, and there are plenty of useful boot features on hand such as luggage nets, power sockets and hidden under-floor trays and compartments. Comfort in the back was ok, but just like the front seats, they’re not the most comfortable I’ve ever encountered. Especially on long journeys, you may find the back support on the firm side. Headroom is quite good, with the Soul using a square, tall design. And the rear seats split and fold 60:40 for that added load-carrying ability. The boot tonneau cover felt naff and could have been better, but otherwise the boot proved fairly impressive. 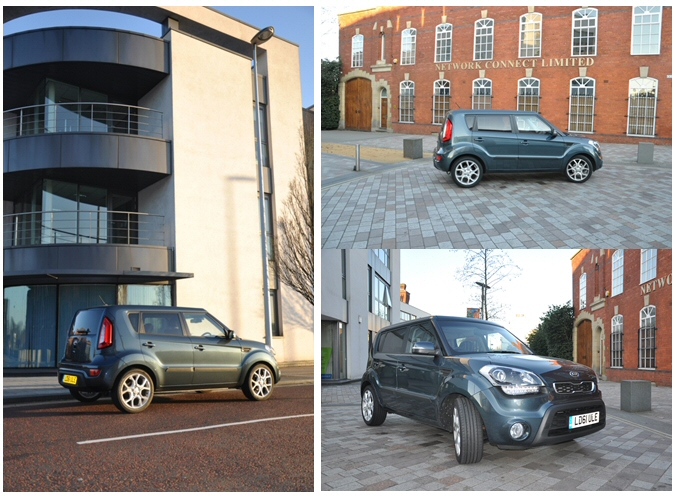 The Kia Soul’s main rival is the Nissan Juke which does turn an even greater number of heads with its cool looks, and the price tag for a comparable Juke comes out in the region of £18,000, so a few grand more than the Soul Hunter. The Toyota Urban Cruiser will also set you back slightly more than the Soul, at around £17,000 for its 1.3 petrol offering. Even a similarly specified Suzuki SX4 weighs in at about £15,319 and theVauxhall Meriva and Citroen C3 Picasso both cost more than the Soul. So the exclusive Hunter variant with its specific options does seem to stack up favourably in the financial stakes. Even though none of them are particularly my cup of tea, if I had to make the decision to choose one of the aforementioned urban crossover vehicles from this segment, I probably would choose a Kia Soul, just without the tartan, please.