What have the original Audi TT and the new Kia Sportage got in common? Answer – they share the same designer, Peter Schreyer, whose modern and stylish work is considerably responsible for Kia’s current surge in popularity. We’ve recently given the Kia Optima a massive thumbs-up and quite liked the Kia Soul. This time it’s the Kia Sportage which gets a going-over. 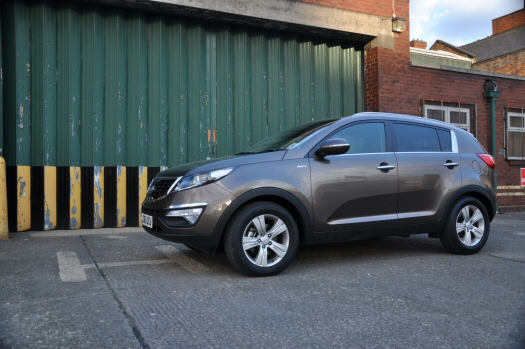 If you can picture what the original Kia Sportage looks like, saying that the new one is leaps and bounds more attractive is an understatement. The new Sportage (which is wider, lower and longer than its predecessor and has 23mm less ground clearance, showing its mainly urban intentions) has a big job on its hands, competing with the ever-swelling number of mainstream crossover 4x4s out there like the Nissan Qashqai, Volkswagen Tiguan, Ford Kuga, Freelander 2 and more recently the Hyundai ix35, which is built in the same Slovakian factory as the Sportage. Kia purposed the new Sportage to be a car people would desire, not just buy begrudgingly or without much thought. LED daytime running lights are all the rage these days (and soon to be a legal requirement in the UK) and are a prominent hallmark feature of the Sportage. Herr Schreyer’s ‘tiger nose’ grille is present on all Kia cars and the Sportage’s face generally looks very sleek, sporting and modern – but stare for any prolonged period and images of Tony the Tiger are conjured up.

With its muscular, athletic stance, tough urban image, high windows, chunky alloys, stylish reverse C-pillars and a practical-but good-looking rear, the aforementioned Tony would no doubt concur that the Sportage does indeed look ‘Grrreeeat!’ In case anyone’s wondering, the official name of the rather ambiguous (but nice) colour my Sportage test car was sporting is ‘Sand Track (metallic)’ and in a practical sense, it does a good job of hiding dirt and looks rather classy. So yes, the overall design of the new Kia Sportage is well executed and I personally prefer its design compared to its rivals.

So what about on the inside?

I’ve driven a fair few Kia cars lately so knew what to expect from the Sportage on the whole when it came to its interior. Whereas the newest model in their range, the Optima, offered very good build quality indeed with some flair thrown in too, the Sportage takes more after siblings the Soul and the Sorento in my opinion, its interior being more functional than daring, with not much of an attempt at luxury. The doors have a very solid, chunky and protective feel to them and Kia obviously sought to provide front seats fit for a king, but the support given felt somewhat lacking possibly because the seats were on the wide side with limited side support, and passengers and I alike sometimes found ourselves wriggling to regain a comfortable position. When I took my reviewer colleague Simon for a spin in the Sportage, he commented that he just couldn’t get comfy with the lack of lumber support and got thrown about a bit going round corners. The height adjustment on the driver’s seat is excellent though, and people around 5ft won’t have a problem finding a visible driving position.

The quality of the cabin felt sturdy and durable, I just would have loved to have seen less plastics and more tactile, classy surfaces. Ironically, although the Sportage’s designers came up with a sweeping, horizontally layered dashboard in order to break up any possibility of a ‘vast cliff of plastics’, I did quite often look at it thinking it was just that. Perhaps I was so used to seeing a colour sat nav screen in centre place, like in the Optima and Sorento, that I was subconsciously disappointed and would have been happier with the higher-specified KX-3 version of the Sportage.

Despite the front seats not being the best I’ve sat on and the dashboard looking a bit Spartan and plasticy, I must say that the Sportage’s front cockpit is a spacious place to be, with plenty of legroom, headroom and space between the two seats.

The gearstick and especially the handbrake felt cheap and the latter creaked and groaned at times, but the rest of the switchgear, controls and buttons such as for the radio and air conditioning all had a nice feel to them. The steering wheel generally had a pleasant grip to it as well and incorporated buttons for the voice recognition Bluetooth telephone system, which seems standard on all mid-to-high-spec Kia cars nowadays. The glovebox is a nice, large size and the central storage box is an excellent size with no protrusions to impede its use. One button I was especially pleased to see was the locking differential button, for improved 4-wheel-drive traction. I know it’s a bit childish, but it’s just reassuring to see such buttons in‘AWD’ vehicles such as this particular Sportage.

In the back, there’s plenty of headroom, legroom and shoulder-room for three adult rear occupants, not encroached by the transmission tunnel, and the part-cloth, part-leather seats are comfy enough. There’s the usual provision of sockets, and visibility is improved nicely in the new Sportage, owing to the reverse-angle C-pillar design. A very welcome inclusion on this KX-2 (the ‘2’ referring to the specification level in the range, and the ‘KX’ referring to the fact it’s the AWD version, not 2WD) model was the massive panoramic sunroof. Front and rear passengers can close the roof blind independently. With both sections open, the light really does flood in nicely.

The boot luggage capacity with the rear seats up is impressive at 564 litres which compares well to a Ford Kuga’s at 360 litres and the Tiguan’s at 430 litres – but isn’t as good as a Freelander 2’s at 755 litres/1,670 litres. Fold the 60:40-split rear seats down and you then have 1,353 litres available in the Sportage. Kia has focused on practicality for families by giving the rear seats a one-touch folding function, and the seats can be released and folded from the boot, saving any awkward leaning and contortion. The boot aperture has a slight lip which fractionally hinders loading-in, and this particular car came with a full-size spare wheel under the boot floor. The luggage net was useful and aided practicality, but it’s not as feature-packed as the boot of say a Skoda Yeti (okay, okay – apples and pears…).

I want to drive it, not just look at it

So what’s the new Kia Sportage like to drive? The 2-litre diesel unit in this Sportage is a more economical, environmentally-friendly engine than the old Sportage’s and produces a fairly impressive 134bhp. Top speed is 112mph and acceleration from 0-60mph is quoted as a decimal place under 11 seconds. Kia claim it will return a combined fuel economy figure of 49.6mpg. I averaged 42mpg, which isn’t bad considering the bulk and size of the car and the fact a lot of the driving during the week was in stop-start traffic and down winding country lanes.

The engine sounded undeniably clattery on startup, not just from cold but also when I drove for 15 minutes or so, stopped and then restarted again a few minutes later. In the Sorento, the engine noise was somehow more acceptable, but maybe because the Sportage is meant to be more of a refined, desirable urban cruiser, I did find the noise got on my wick at times. Once the engine was in 4th gear and above, it quietened down a lot and was quite nice to drive, though. The Sportage never felt rapid even when pushed, but for the average driver it should suffice.

First and second gears were a bit on the notchy side as far as the 6-speed manual gearbox was concerned, but higher gears were perfectly comfortable and the Sportage pulled reasonably well at all speeds. It also benefitted from Hill-start Assist Control, which worked very well and is a reassuring feature on a big, relatively heavy car like this.

The handling proved to be on the positive side of average, with not that much more than the expected SUV body roll when cornering thanks to the fairly firm suspension, with acceptable although slightly vague steering and a pretty good ride quality overall. The Sportage coped with lumpy, bumpy surfaces very well, conquering potholes and pitted, stoney farm tracks with ease. In a way, I was glad when snow fell in my local area mid-way through the week-long test, as I got the chance to see if the Sportage’s torque-lock mode was effective. Push the button to the right of the steering wheel and instead of 100% of torque being delivered to the front wheels, it is distributed 50:50 front and back, upto speeds of 25mph, using the Dymax intelligent electronically-controlled single-high-ratio AWD system developed by Magna. The Sportage definitely tackled the snowy road surface more confidently in ‘lock’ mode, and there’s a Hill Descent Control button to press should you find yourself needing to drive down steep, challenging slopes. The system also meant that most of the time, I was driving in 2WD mode, increasing fuel consumption overall.

Covered by Kia’s 100,000 miles or 7-year warranty, with servicing every 22,000 miles or annually and costing an average of £300 to service over 3 years, the Sportage is a worthy compact crossover SUV to consider. Caravanners will be able to tow up to 2,000kg and with BIK company car tax at 23% (very similar to that of the Volkswagen Tiguan, Ford Kuga and Land Rover Freelander 2, for example) it’s not a bad choice for business drivers. Its driving dynamics aren’t especially notable or exciting but it handles well overall, both on and off-road, providing a safe, solid and practical ride.

How does the new Kia Sportage KX-2’s price of £23,500 compare to its main rivals? A similarly-spec’ed Ford Kuga in 4WD guise would cost in excess of £25,000, a VW Tiguan about £27,000 and a Land Rover Freelander 2 in the region of £28,000. But as a slightly leftfield alternative, you could get a top of the range 4×4 Ssangyong Korando EX for less, at £21,445 – or a mid-range Korando ES for £19,495. If you don’t dare to be different and aren’t bothered about or don’t have the extra dosh for a more premium badged compact 4×4 SUV, the new Kia Sportage makes for a very good choice – although Kia loyalists might be advised to wait until they can stump up the extra few grand for the even-better-equipped KX-3 Sat Nav version of the Sportage at £25,620.