New Range Rovers come along very seldom. The last one was launched all the way back in 2002, so when a new one is launched there’s a little celebration to be had.

But first a little history. Let’s imagine for a moment the date is 1970 and your career of choice is Country Gent. Naturally you need a four wheel drive vehicle in which to thrash around your vast expanse of land, but you also require something comfortable and refined to whisk the family to London for a discerning meeting. Up until 1970, this meant you needed two cars – but then along came the original Range Rover and this meant that the Mercedes could now stay at home.

Here was a car that was happy mixing the rough and tough of country life with just the right image when city dwelling.  This mixed-use ability has stayed with the car through each and every incarnation, receiving accolades for its off-road ability whilst remaining the luxury car of choice for the discerning buyer.

This fifth version was conceived and then promptly dispatched to fat camp where it gained a sharp suit of aluminium, reducing its weight by a staggering 420 kilograms over the outgoing model.

The model we tested was the flagship ‘Autobiography’ model complimented by the most powerful diesel of the range, the 4.4 litre V8.

If you like what you see, you should, as it now comes at an increasing price. The range starts from just over £71,000 in the UK with this particular model nudging £95,000. 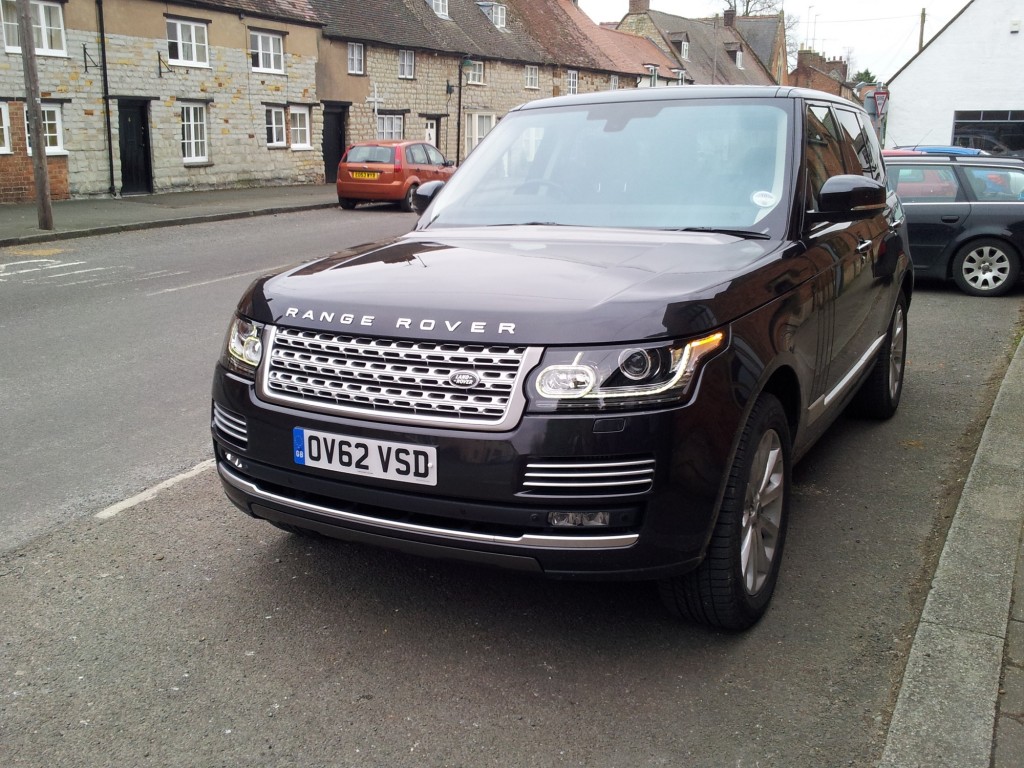 The new model still has the presence that only a Range Rover can possess but it’s less White Cliffs of Dover bluff and more streamlined, like it was dragged kicking and screaming into a wind tunnel. But it’s all the better for it, looking fantastically modern but still classically Range Rover.

There are the traditional design touches, the clamshell bonnet and the floating roof trademark but these are now mixed with some clever design touches too. When viewed in profile form, you will note how the headlight and rear light clusters integrate into the bodywork a la Evoque, but it is also a clever way to disguise the bulk of the body.

The design also features the so called ‘Queen Mary Tunnel’ side grille along with the optional contrasting chrome strip that runs the lower length of the doors which aims to break up that huge mass of metal. It works too. Park the car up and there is no doubt it is on the large side but not politically incorrectly so.

The front of the car has a distinctive appearance helped by the attractive shape that the LED daytime running lights form, and rear lights that are comparatively small – another body mass shrinking trick. 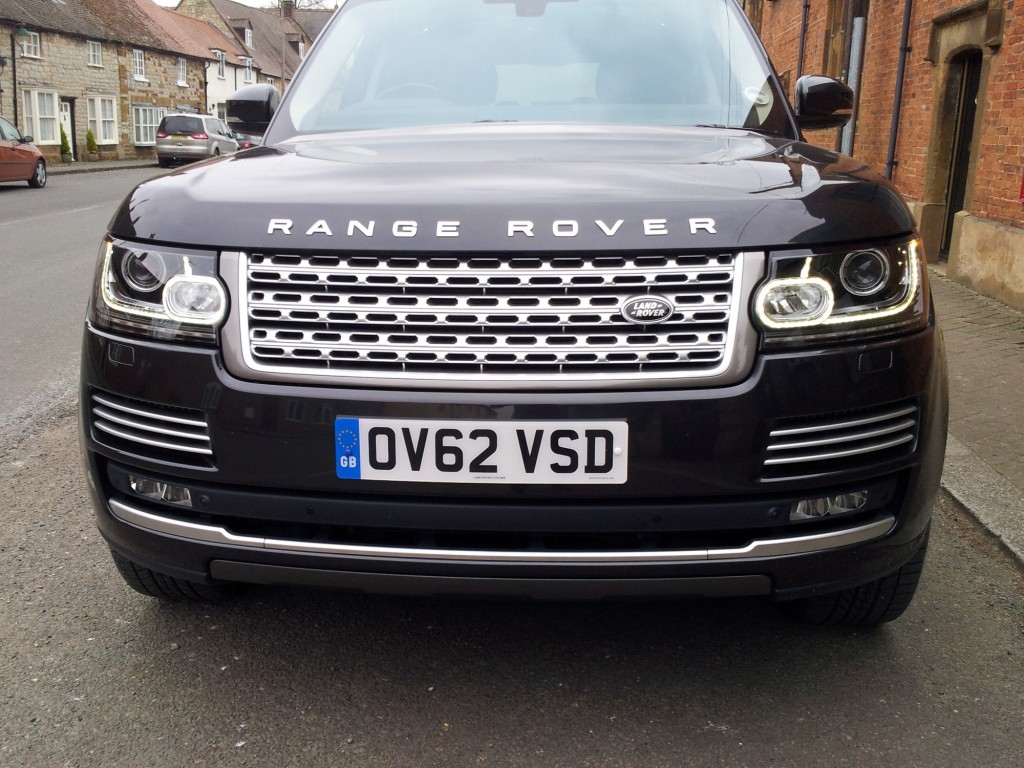 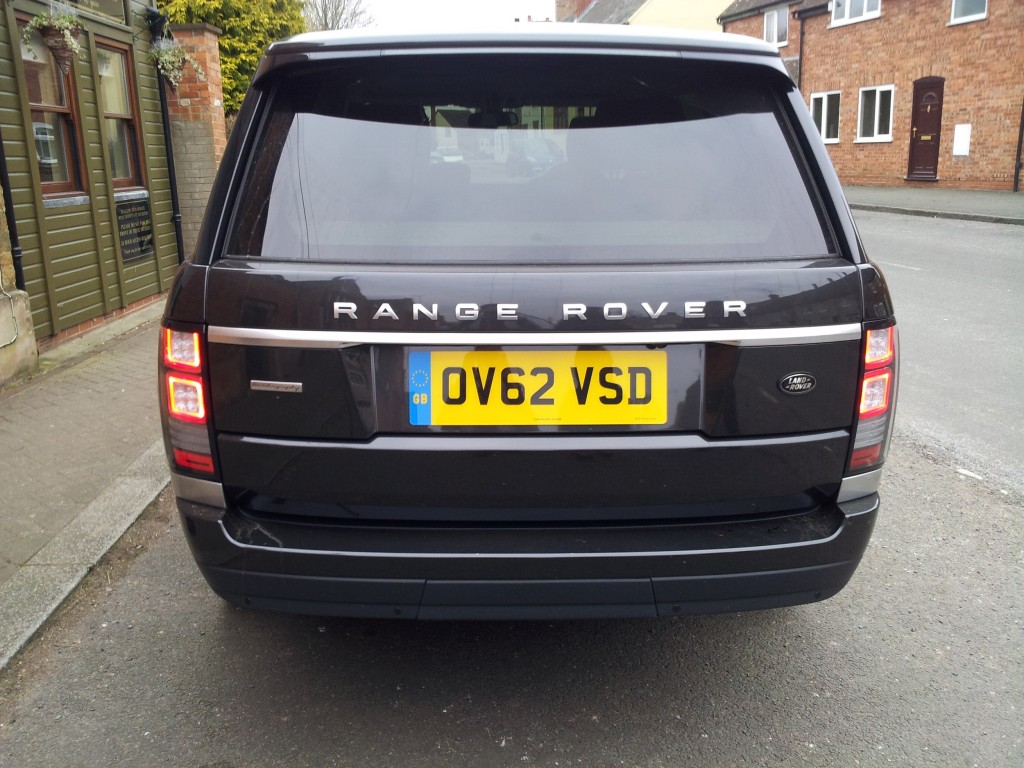 See one on the road for the first time and you will be in no doubt what car this is, but look a little closer and like any good makeover, the Range Rover has been made to feel young, confident and whisper it, sleek!

When the previous generation Range Rover was launched back in 2002 it was widely recognised as having one of the best interiors of any car on sale. This version takes all that was best with that interior, with big chunks of wood mixed with a tasteful combination of metal and leather, but gives it a minimalist appearance by reducing the overall button count by half through the use of intuitive touchscreen.

Pull yourself up in to the interior noting the commanding view ahead and you will feel like you are sat in a Bentley on stilts. The interior is now that good.  The leather is the waxy kind that feels reassuringly expensive in your hands and in this case, it is all complimented by tasteful piano black wood. Special mention should be given to the steering wheel, which is exquisite with its thin leather-wrapped rim and beautiful aluminium turrets that house the multi-function controls. 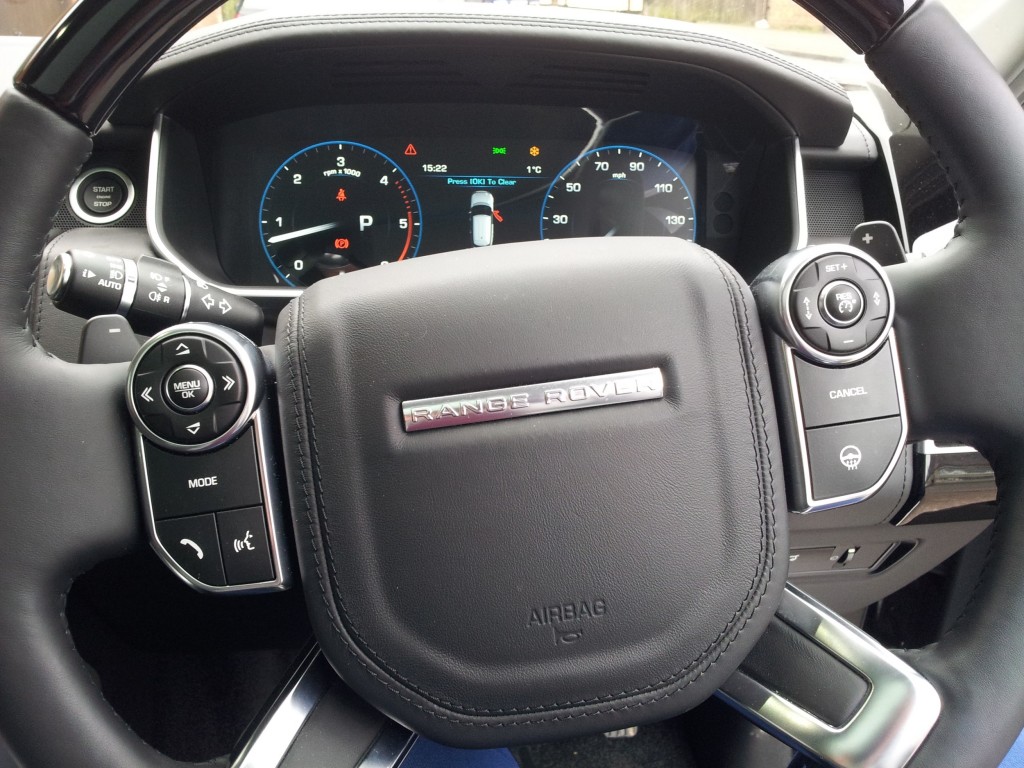 The interior is also bathed in light thanks to a full length sunroof which adds to the airy feeling inside. 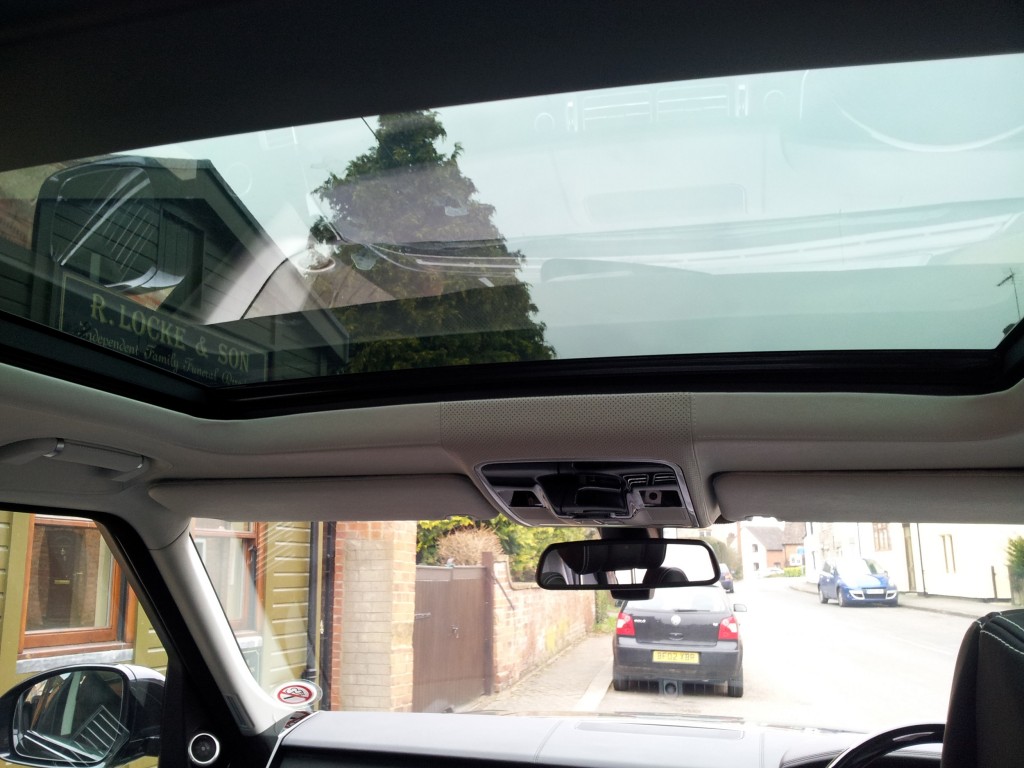 Despite the strides made in taking Range Rover into the upper echelons of the luxury car market, its roots have not been forgotten. That is to say, that the pedals are still big and wide enough apart so that you can drive one in your Hunter’s and can still adjust the temperature settings on the centre console whilst wearing gloves.

If there was one problem with the previous generation Range Rover it was in the back. This was not a chauffeuring car as rear legroom was on the tight side despite the gargantuan proportions of the car and entry/exit was not the most eloquent either. The new model fixes this by offering more lounge like space in the back (nearly 12 cm more) along with wider access so you can get in and out more gracefully. There is even an option for ‘Executive Class’ seating which offers two reclining rear seats leaving no doubt where this car is being aimed at: The East. In countries like China, your status is governed not by what you drive but what you are driven in. 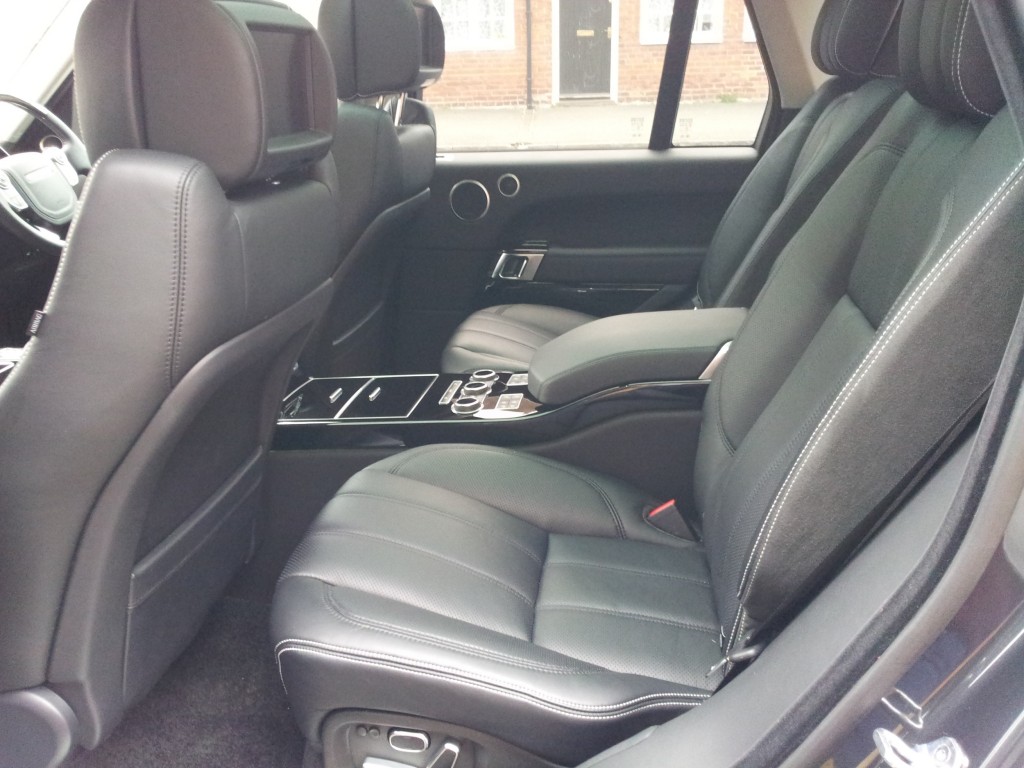 Like any self-respecting luxury car, there are a multitude of options to choose from. Want pimento red seats with ebony leather headlining and rose wood dashboard inserts? Just tick the right boxes and open your wallet!

This latest Range Rover is also a technical banquet offering a multitude of systems to enhance your enjoyment and capability of the car. Main ones include Land Rover’s dual view touchscreen which allows the driver to use the satellite navigation whilst the passenger watches a DVD on the same screen through wireless headphones, and best in class four zone climate control allowing each passenger to set their own desired temperature independently. 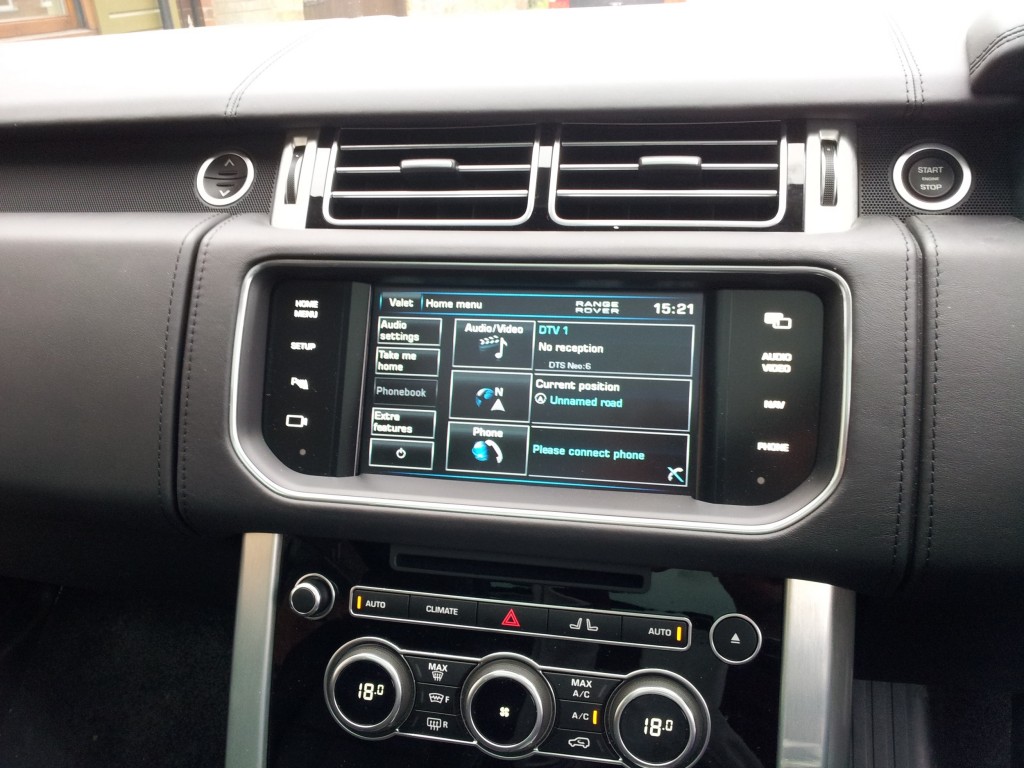 Then there is adaptive cruise control which can maintain a set speed but apply the brakes where necessary to maintain distance from the car in-front and a surround camera system that offers the driver with an all-round sight of the car when manoeuvring.

Criticisms? Not many. A picky point would be to say that the paddles behind the steering wheel are too flimsy and feel cheap and a few more buttons please! Sometimes you don’t want to trawl through menus and sub menus simply to adjust the tone on the radio – it’s not exactly ‘safety-first’ either when you are driving! 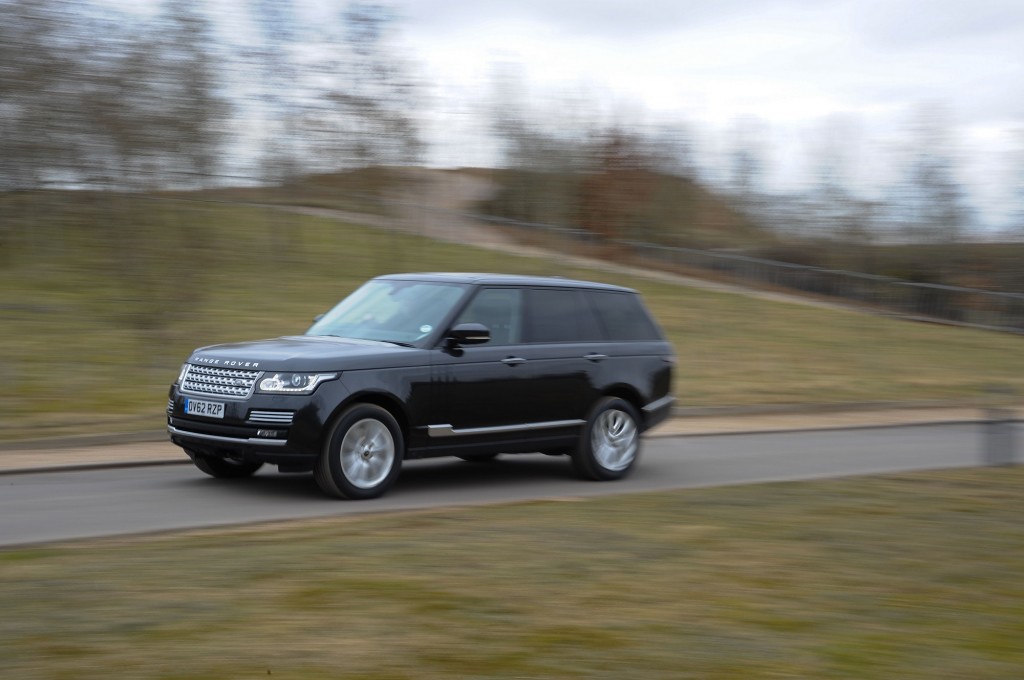 This is where the impact of the weight loss can most be felt. Do what any motoring enthusiast would do: gun the throttle and see what happens. One word: Shocking. For the first time a diesel Range Rover powers off down the road like a jet on the runway. Despite its size it now takes on the guise of a sprightly athlete, not only is it quick but now for the first time it responds well to steering inputs – less QE2 in the bends, more Sunseeker.

Once the initial excitement calms down you start to settle down into the Range Rover way, that is sit back, relax and let the car soothe away the miles. The ride quality is astonishing for a car of its size, cosseting its occupants from even the harshest road surfaces. Combine this with its commanding view of the road ahead and you have one of the most relaxing cars I have ever driven.

But no Range Rover drive would be complete without testing its off-road ability and you may think that this move ever upmarket would see the car move away from this hallmark. Not so. The way this car combines first class comfort with a mountain-goat like ability to climb absurd inclines and wade through water nearly 90 cm deep is astonishing.  For a proper laugh out loud moment, may I suggest sitting in the back, watching a DVD whilst your chauffeur drives the car down a concrete staircase and then for the sheer hell of it reverses back up to the top. No other car in the world manages to balance this range of abilities.

This is a Range Rover so it has to combine luxury with practicality and it does by offering more interior space with a multitude of storage space. The trademark split tailgate also affords you a nicely upholstered bench on which to enjoy your lunch at the races. This is now fully automated too so you can now finally close the boot without getting one’s hands dirty. 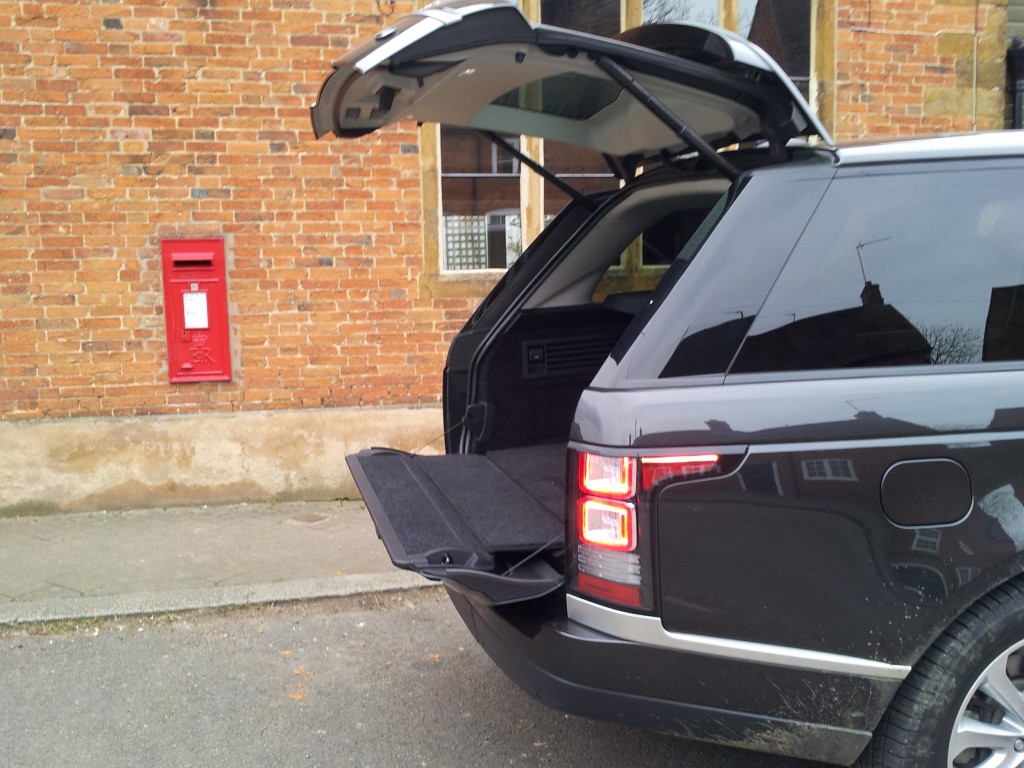 Make no mistake this is an expensive car to buy and then to run but it is a little bit kinder on the wallet. The weight saving has improved the fuel economy and the carbon dioxide figures by a very healthy 22 per cent. The smallest engine, the 3.0 litre diesel will even achieve over 30 miles per gallon. This is the greenest Range Rover yet.

Predicted residuals for new Range Rover are strong meaning that the car will retain a relatively high percentage of its value when you come to sell. This is helped in part by the strong demand for the car, so much so that there is currently a significant waiting list for one.

Range Rover has always sat at the pinnacle of luxury off roaders and this incarnation moves the car further ahead and away from the competition. That said, with upcoming equivalent cars from Bentley and Maserati, this competition will get more intense and challenging over the coming years.

However, by any measure this is a fantastic car. As a luxury car its refinement is unparalleled and as a vehicle to use off road it is without rival, but the very fact that it combines these talents together is truly astonishing. It still seems a crime to get it dirty though! 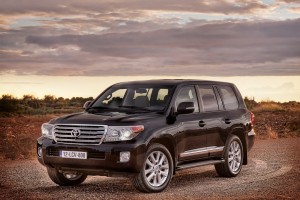 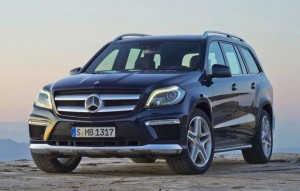 Cons: Too big and does not have the kudos of Range Rover.