There’s something about Italian stuff. Most people seem to have the perception that anything from Italy is somehow better – everything from food, wine, fashion and women to history, culture, fancy coffee machines and of course, cars. So what did I personally make of the Alfa MiTo in aptly named ‘Alfa Red’, with its flappy-paddle automatic gearbox and its stop-start 135bhp petrol engine? 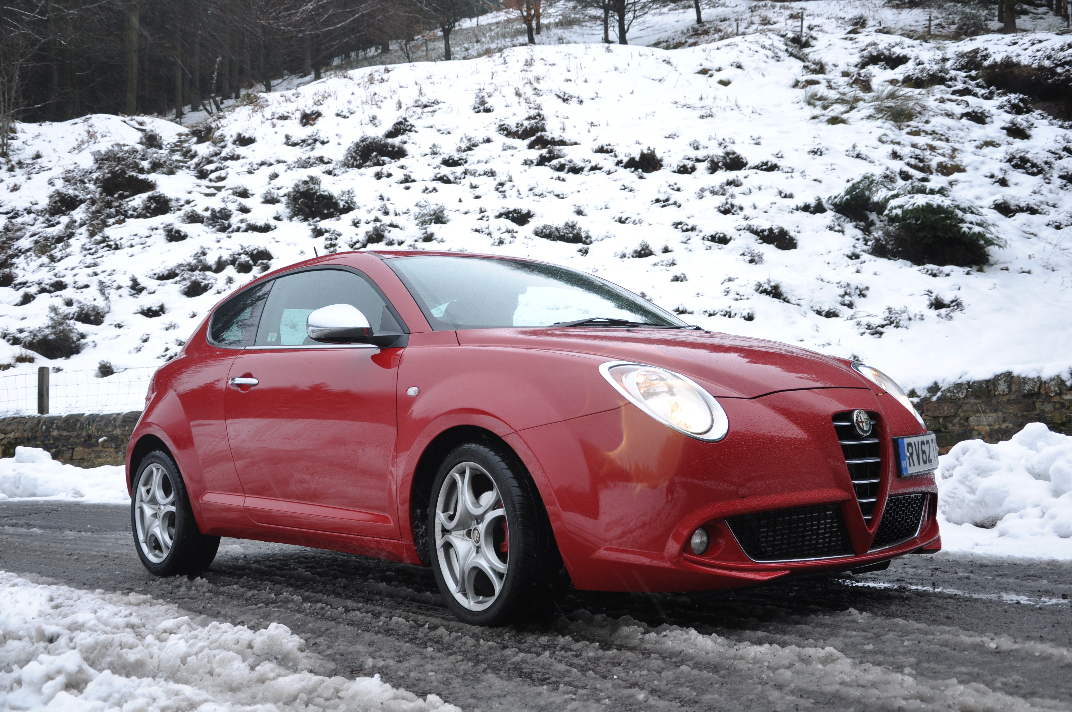 To me, the MiTo looks like the lovechild of an Alfa Romeo 147 and the Italian firm’s drool-inducing beauty the 8C. The front light clusters are very similar to the 8C’s and partner the 147’s grille very well. The front fog lamps, air intakes, spoiler and other design features all work very well, too. Moving round the car, the side profile of the MiTo looks squat, purposeful and sporty, whilst at the back, the 8C-inspired LED light clusters, large Alfa badge which doubles as the boot release, the chrome exhaust tip and the mesh insert in which the parking sensors are sat, finish off the sexy little Italian’s styling nicely.

Okay, one couldn’t really miss this test MiTo in its bright red colour scheme, which perfectly reflects the spirit of Alfa Romeo. But it’s the little touches and details on the MiTo which really do make it a special object to own. The red brake callipers look great, as do the various flashes of chrome courtesy of the the wing mirrors, the bezels around the rear lights, and the door handles. Alfa Romeo cars have always oozed style and the MiTo is no exception, with its suitably distinctive alloys which look decidedly un-German. The MiTo’s design conveys the car’s sporty nature effectively, without being at all yobbish. Boy racers and chavs need not apply, when it comes to an Alfa Romeo Mito. Okay, a fair number of hairdressers and lettings agent types have subscribed to the MiTo philosophy in droves, but so have a decent number of genuine petrolheads from all walks of life, who love what Alfa Romeo stand for but don’t have the cash, the space or the conscience for a much larger Italian stallion. 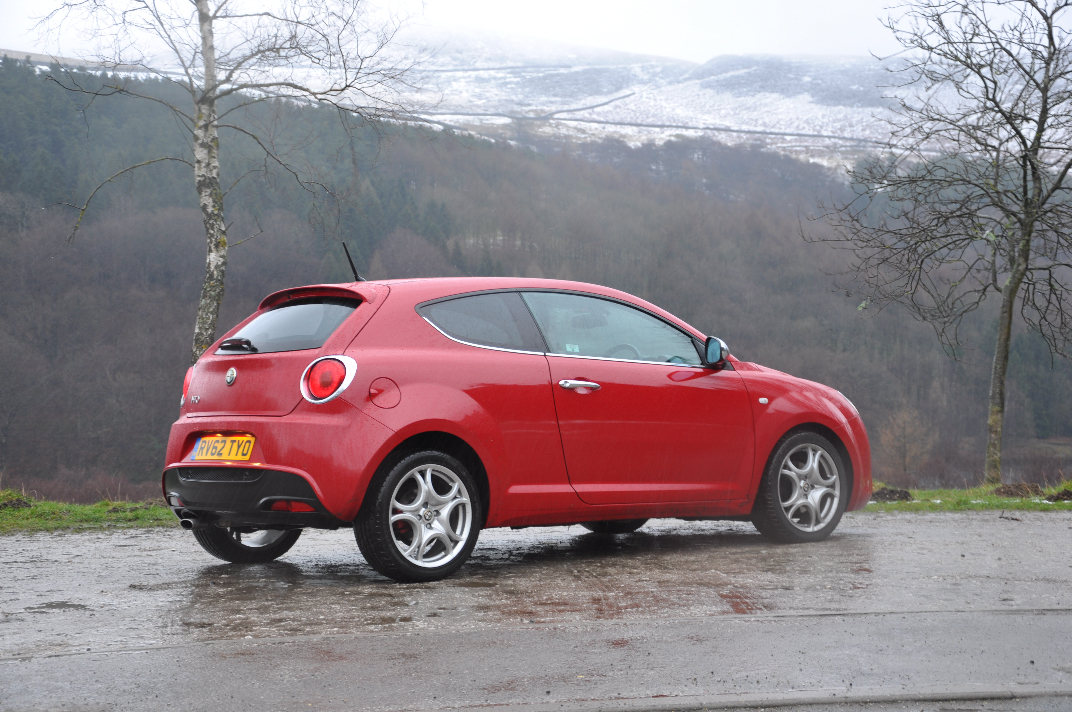 Stood still, the MiTo looks great, and on the road, it’s always a pleasure to spot one. Although it did attract some very aggressive comments from one thug who, going by what he was shouting, had seemingly mistaken me for a banker, most other motorists and pedestrians who caught sight of the MiTo looked on appreciatively. It’s a shame the mid-February snow kept on falling, hampering the chance of getting any decent urban photos – but hey, the MiTo looked quite cool up in the wintry hills. Everyone knows me as someone who prefers big cars, but as far as small cars go, I quite like the MiTo from a design point of view.

Any dashboard which greets you with Italian words like ‘Benzina’ and ‘Acqua’ splashed around the place immediately scores highly in the coolness stakes. The Italian factor being reinforced on the inside as much as on the outside really gives you the overall impression of being part of a car with heritage and character. 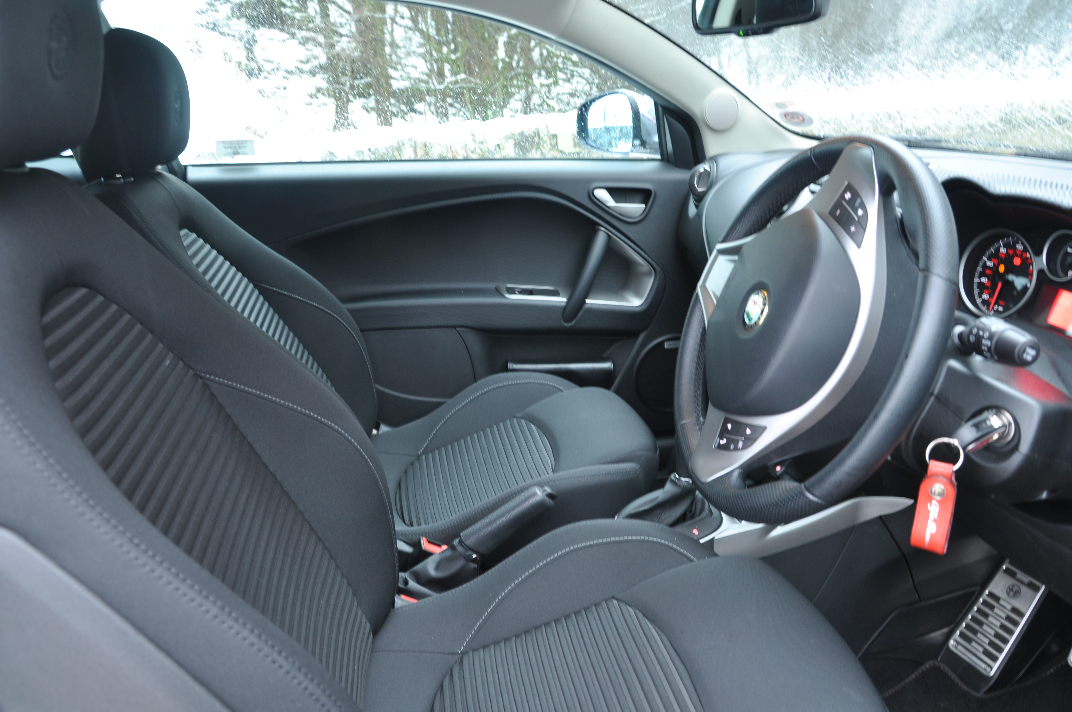 The ribbed sports seats not only hugged me firmly in position but looked great at the same time. The interior of this test car was rather dark and formal in black, with aluminium trim aiming to break the sombreness up a bit. But it will appeal well to buyers who fancy a change and who have decided to turn their backs on the German crowd. The dash and other ‘higher up’ plastics are of a decent enough quality, but if you start tapping your knuckle on surfaces lower down, you’ll find they’re definitely on the cheap side. Bluetooth pairing proved a piece of cake and the various other buttons and dials were all simple enough to use. The loud seatbelt warning bong got on my wick, though.

The door bins are large enough to accommodate the chunky owners’ manual, and unlike the Fiat 500, the MiTo does come with a glovebox. There’s additional storage in the front centre armrest but it’s long and shallow so more suited to chopsticks than much else, and I found the armrest got in the way of the conventional handbrake, so I left it in the raised position all week. The mystery ‘pushy thing’ on top of the dashboard is TomTom dock. 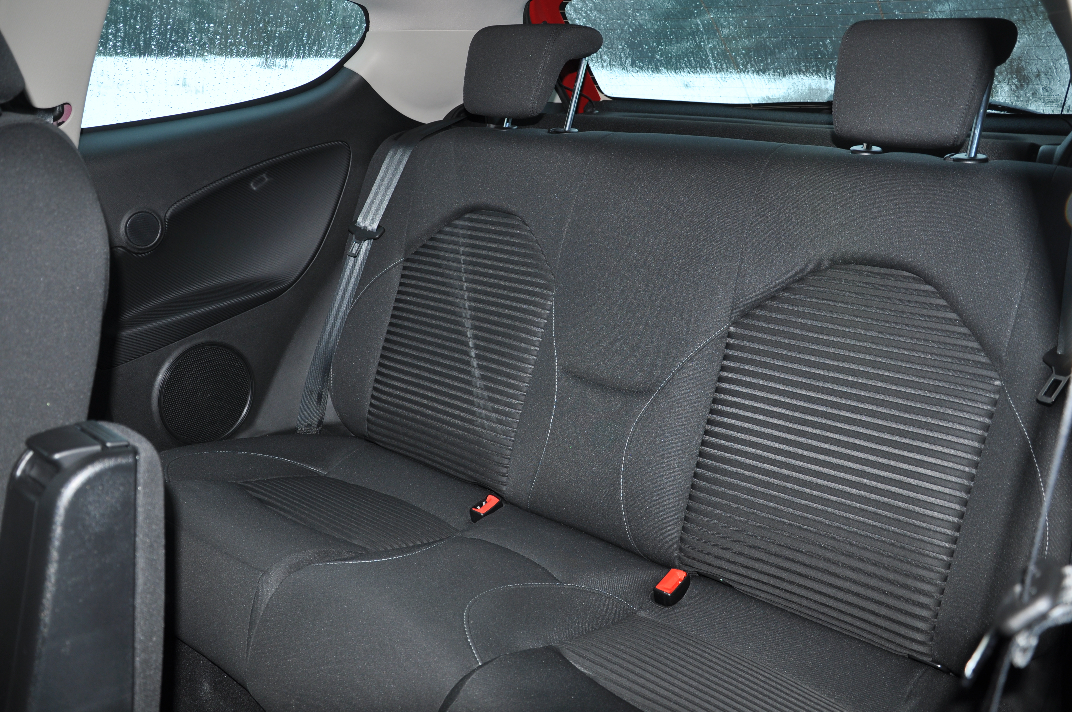 Until I noticed the badges, I wouldn’t necessarily have guessed the audio system is a BOSE one, but it did generally sound good. Contrary to their preconceptions, the 5’10” passengers I carried in the back said headroom and general space were better than in the Fiat 500. Practicality wise, you can fold the single-bench back seats down so they’re fairly flat, but loading any large items in isn’t a complete doddle as there’s quite a pronounced boot lip to contend with. The actual boot was surprisingly accommodating, though, and managed to fit in our boringly samey weekly supermarket shopping. It’s a safe car, too, with a 5-star NCAP rating.

The big talking point about this particular MiTo is the TCT transmission, which in a nutshell is a clever double-dry-clutch, 6-speed gearbox which, like Volkswagen’s DSG transmissions, thinks about and engages the next gear in readiness, supposedly resulting in faster, smoother shifts. 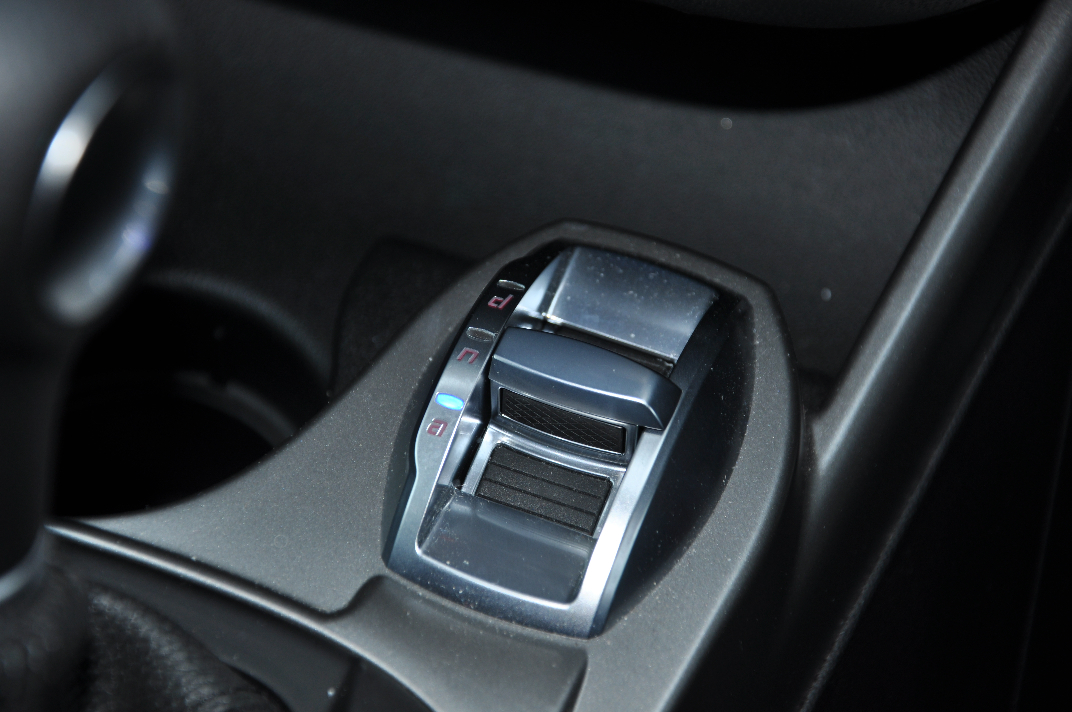 An automatic gearbox in such a compact, sporty, petrol car is somewhat unusual – but me being a fan of auto transmissions, I was keen to see how it performs. Around town, there’s the obvious advantage of not having the hassle of constantly nursing a gearstick, nor the concern of having to bother with clutch control, especially when edging uphill in slow moving traffic. So the TCT wins in that regard. But, sticking with urban driving for the time being, it loses when it comes to its ratios. The MiTo MultiAir came fitted with Alfa’s clever ‘DNA’ system, Dynamic being the sporty setting, N being normal and A the all-weather setting for improved control. But whichever mode I set the car in, it always seemed to cling on to 1st gear for dear life, which attracted a few stares from passers-by, who must’ve thought I was a learner in the middle of a lesson. And for me, the driver, it felt like I was driving a car with a CVT ‘box. Okay, it’s a high-revving engine and a cheekily sporty kind of car, but if you want to just potter down the shops, you might not want to rev it to bits – but if felt like there was no choice.

The gearbox can be operated “manually” by shifting the gear selector forwards and backwards, or using the paddles behind the steering wheel, and this did lessen the annoying high revs, but highlighted how ponderous the gearbox could sometimes be, feeling like it was taking too long to shift up or down. I’m still talking about urban driving, by the way, and in its favour, the MiTo’s steering was lovely and light for around town and manoeuvring. I’m also one of apparently few who thought the stop-start system wasn’t that bad after all. I’d heard bad things about it, and yes, it is quite strange to have stop-start in an automatic petrol car. Actually, though, this is the MiTo MultiAir TCT’s claim to fame, as only it and the Porsche Panamera currently have such a combination. I found that the way to lessen any frustration was to watch traffic lights and other environmental happenings carefully, so I didn’t get caught out by green lights suddenly appearing whilst the engine shook itself into life again. It only let me down once, in fact, which was bizarrely at a downhill-facing junction. I only stopped for a few seconds, but when I pulled out of the junction, the stop-start system cut in again, effectively stalling me. The stop-start system can be turned off, but this will have an impact on fuel economy. 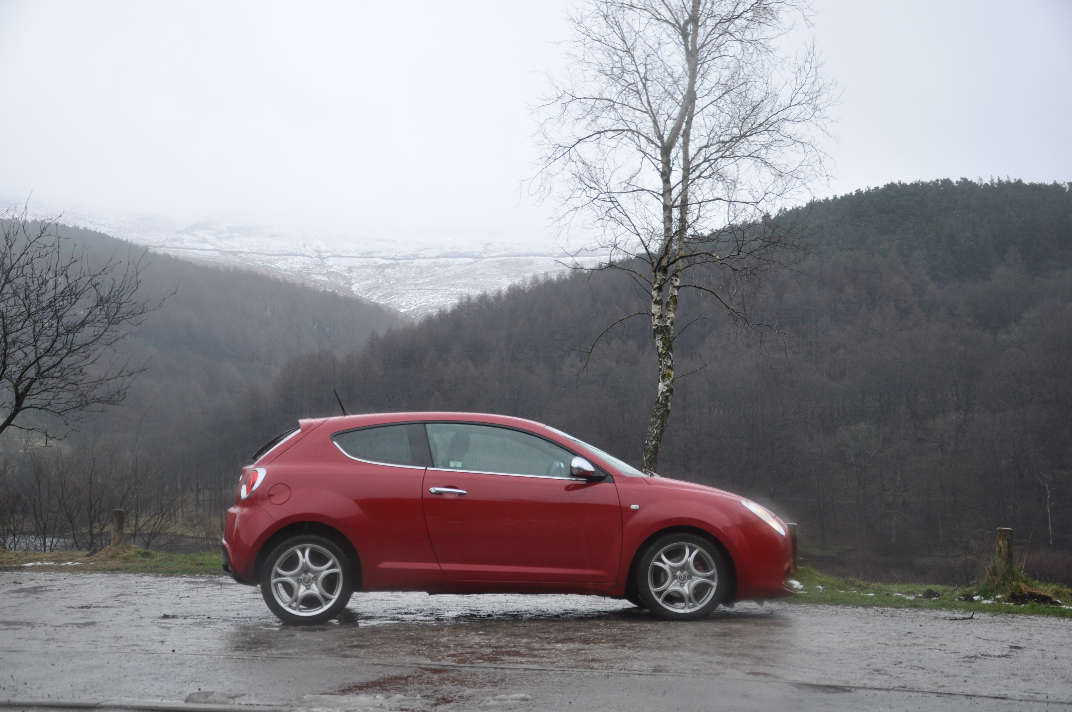 Unleash the 135bhp MiTo MultiAir TCT on the back roads, however, and it becomes a different, rather more enjoyable animal – especially in Dynamic mode. Apart from the first couple of gears, which are still annoying sometimes, the amount of power on tap is incredible, considering it’s a modest 1.4 petrol engine. Slam your foot down and the MiTo picks up speed like nobody’s business, producing a nice engine sound and exhaust note, too. Use the paddles to shift down before cornering, and the engine revs wonderfully. DNA definitely makes a noticeable difference, giving the car a really sporty edge in Dynamic. I was grateful for the option of A for all-weather when the snow came down quite heavily on Snake Pass, the car feeling more planted and sure, even if slightly artificial with the bolstered safety systems.

Apart from the firm ride, which is to be expected, what with the car’s sporty intentions and setup, and the 17” alloy wheels, the handling is superb. Fling it round any corner and it obeys willingly. I encountered a bit of oversteer at times, in a fun sense, and the whole steering and suspension setup really contributed to an enjoyable blast round Cheshire’s B-roads – on wintry days, I might add. There was always some wind, road and tyre noise present, though, especially from the rear wheel arches. But overall, the MiTo MultiAir TCT was a bucket of fun on the right kind of roads.

The Alfa Romeo MiTo MultiAir 1.4 petrol 135bhp TCT has a top speed of 129mph and a 0-62mph time of 8.2 seconds, but it actually feels faster, as and when the gearbox is in the mood. Curiously, the semi-automatic TCT version of the 1.4-litre 135bhp engine is more economical and performs better on paper than the manual. 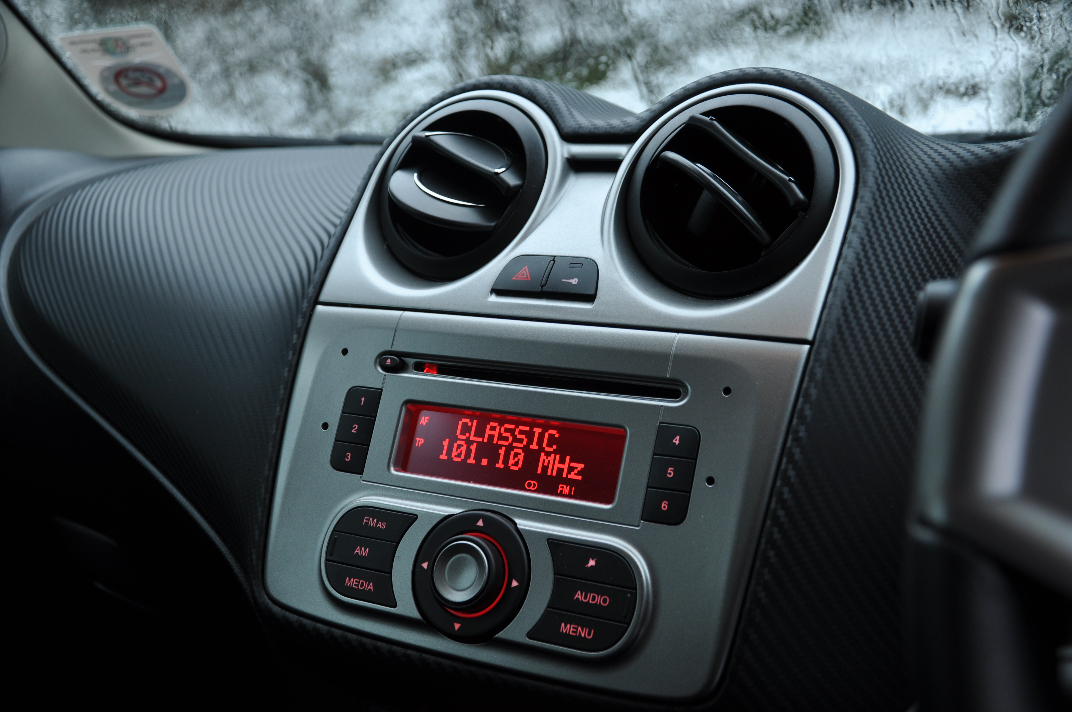 Alfa publish a combined fuel consumption economy figure of 51.4mpg for the car I tested, but no matter how gingerly I drove, I couldn’t get the dash to display more than 43mpg. The ‘on paper’ figures for the Alfa MiTo beat a standard MINI Cooper in every facet, by way of a quick comparison. As well as the similarly-priced MINI, the MiTo’s primary rivals are the Audi A1 and the Citroen DS3. I priced up an Audi A1 1.4 TFSI S-tronic S Line and it came to £19,525ish. A Citroen DS3 VTi 120 automatic DStyle came to just over £19,000 as well, so all four cars are priced about the same.

The Alfa Romeo MiTo MultiAir Distinctive 1.4 Petrol 135BHP TCT definitely packs enough flair and style, both outside and in, to match its rivals, if not decisively beating them. I really didn’t find the stop-start petrol engine setup to be a deal-breaker and once I broke free from slow-moving urban traffic, the TCT gearbox came into its element. Add the crisp handling and the MiTo acquits itself well as a small, sporty hatchback. There’s enough space in the back for occasionally carrying four on-board and the boot’s decent enough other than the large lip. The ride may prove too firm for some, and the published fuel economy figures seem hard to get anywhere near, so commuters with longish journeys might be better looking at a diesel MiTo. I didn’t find the MiTo 135bhp TCT as addictive and as all-round-sorted as its leftfield Suzuki Swift rival, but it’s a decent effort from the Italians and certainly worth test-driving. You might just fall for its Italian charms.

Standard Specification includes (but not limited to):

Options fitted to this press car: