Jaguar has always had a thing for naming its most revered sports cars after letters. It all started with the glorious Le-Mans winning C-Type in the early 1950’s followed by the Le-Mans winning D-Type of the mid ‘50s and then, the most beautiful car in the world, according to Enzo Ferrari, the E-Type of the swinging 60s. And now, finally, a whole 50 years after the first E-Type, we have the F-Type! 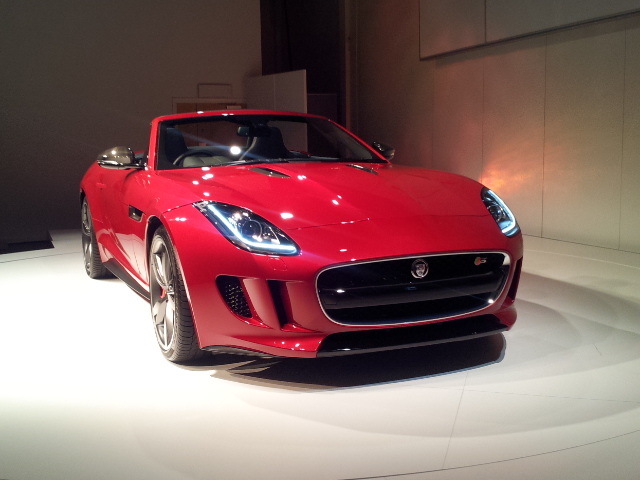 The F-Type aims to re-claim Jaguar’s spirit for the sports car market from that of Porsche, whose ever-ringing cash till of sales seems to have finally hit home with someone at Jaguar. That someone was Ratan Tata who, after taking over JaguarLandRover in 2008, said that Jaguar, without a proper sports car, made no sense considering its racing heritage.  He ensured it was a priority to bring the sports car to market. 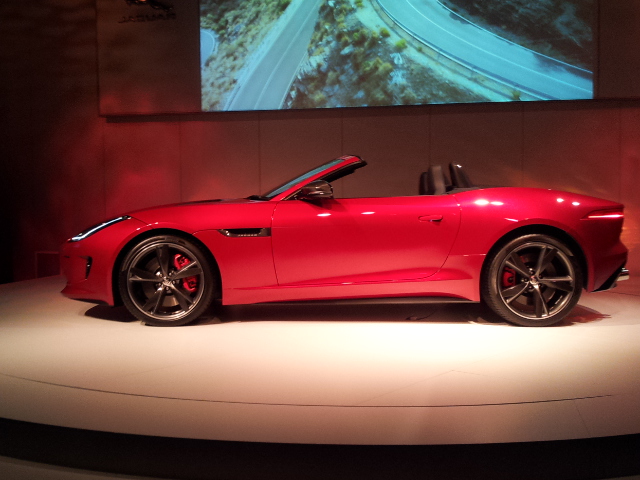 Fast forward to 2012 and, despite turning up late to the party, the F-Type certainly knows how to make an entrance! Following on from the ‘most beautiful car in the world’ is no easy task and it would have been easy to do a modern version of the E-Type, but Ian Callum (Jaguar’s chief designer) wisely chose to stay away from this. Here is a car that is still agonisingly pretty but one that is right for the 21st Century that doesn’t hark back to past glory days. Yes, there are subtle nods to the past, from the large grille at the front, the impossibly thin rear LED strip lights and the Jaguar script on the boot but make no mistake – this is not an exercise in nostalgia, this is just damn good car design. It is modern underneath too, featuring a lightweight aluminium construction and next generation engines to reduce emissions. 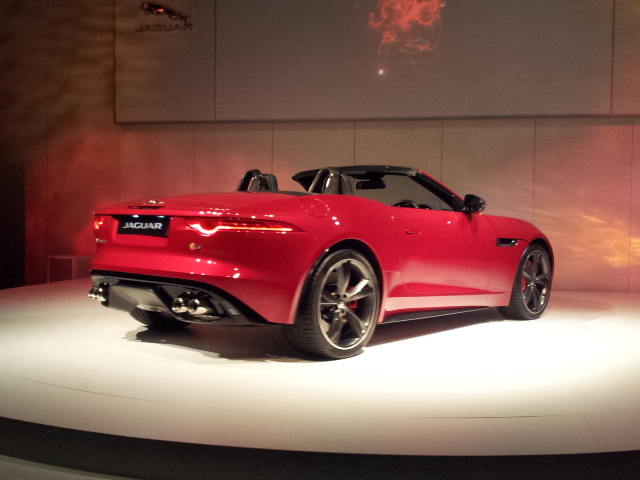 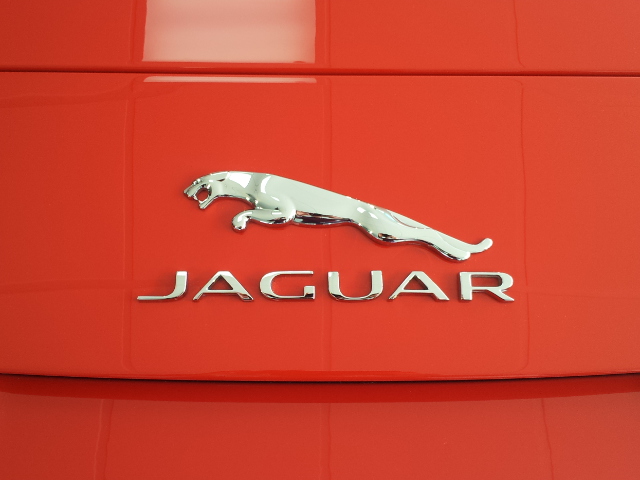 MyCarCoach was invited to the exclusive launch event in London where we were left in no doubt who the target market for F-Type is, two words young and fashionista spring to mind. Whilst a DJ spun the latest records, three cars sat waiting patiently undercover amongst a plethora of flashing lights in-front of an expectant youthful crowd. 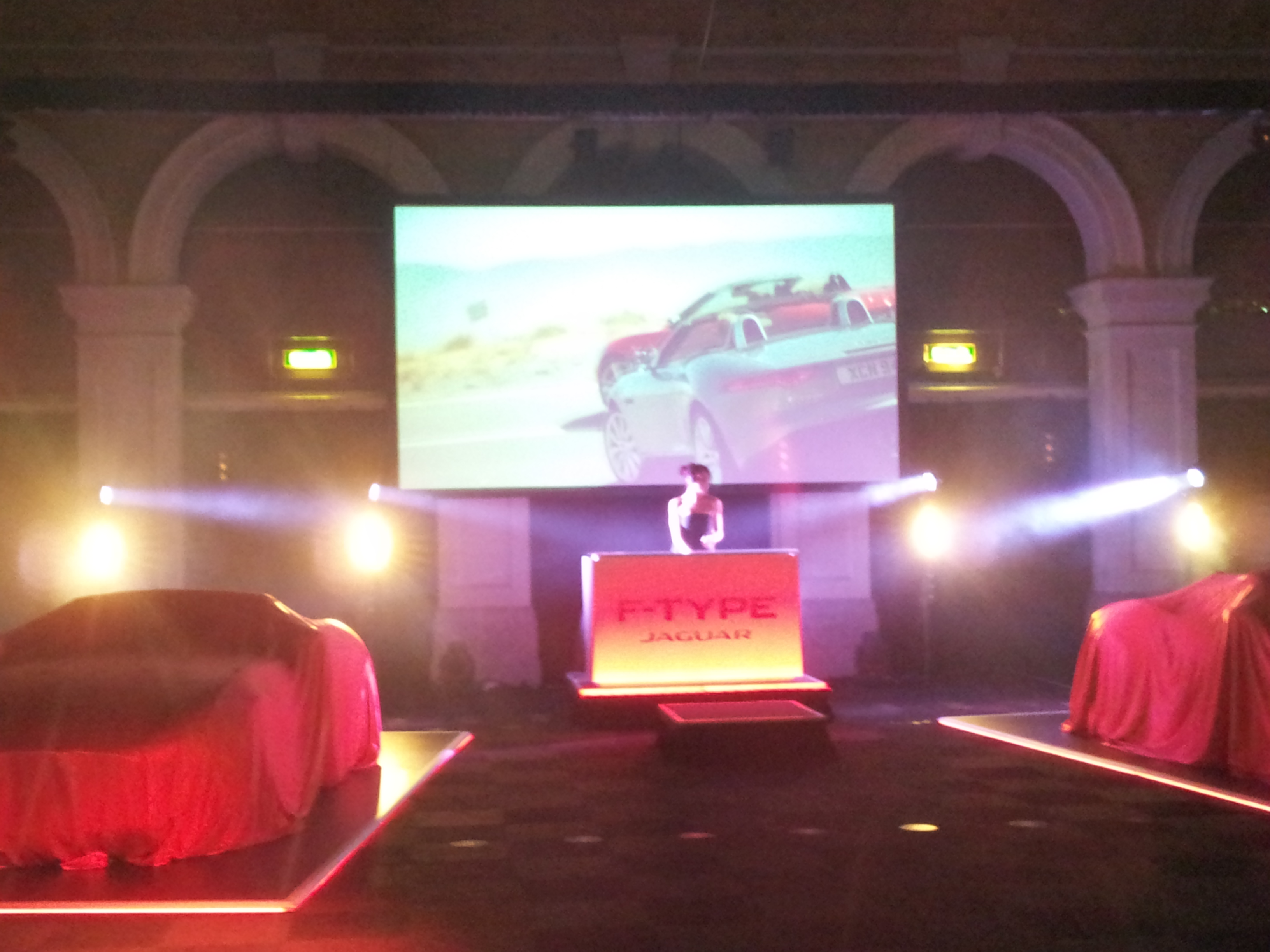 Then, after a flirty striptease, the covers were off and the reaction of the crowd can be summed up by the gentleman standing next to me who simply exclaimed “that car is sex!!’. 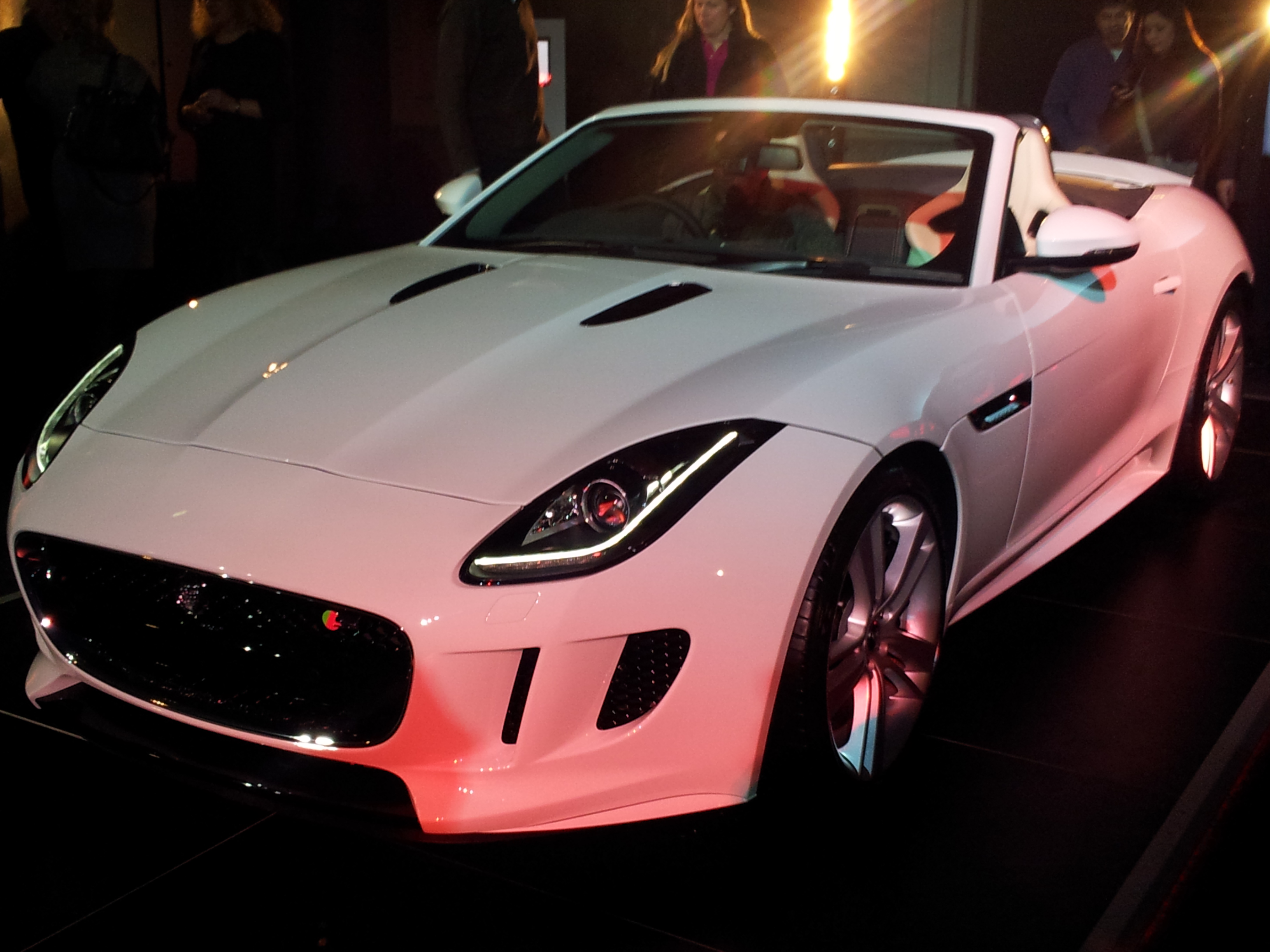 Once we were invited to come and take a closer look, it was a free for all with many in the crowd wanting to touch and caress it like a piece of automotive sculpture.  To a chorus of ‘ooooohs’ and ‘wows’, the audience noticed the door handles that sit flush when the car is in motion and flick out once the car is unlocked and the ‘J’ signature daytime LED running lights in the headlights.  They didn’t just want it, they wanted it now and many were even waving their cheque books there and then to satisfied Jaguar staff. 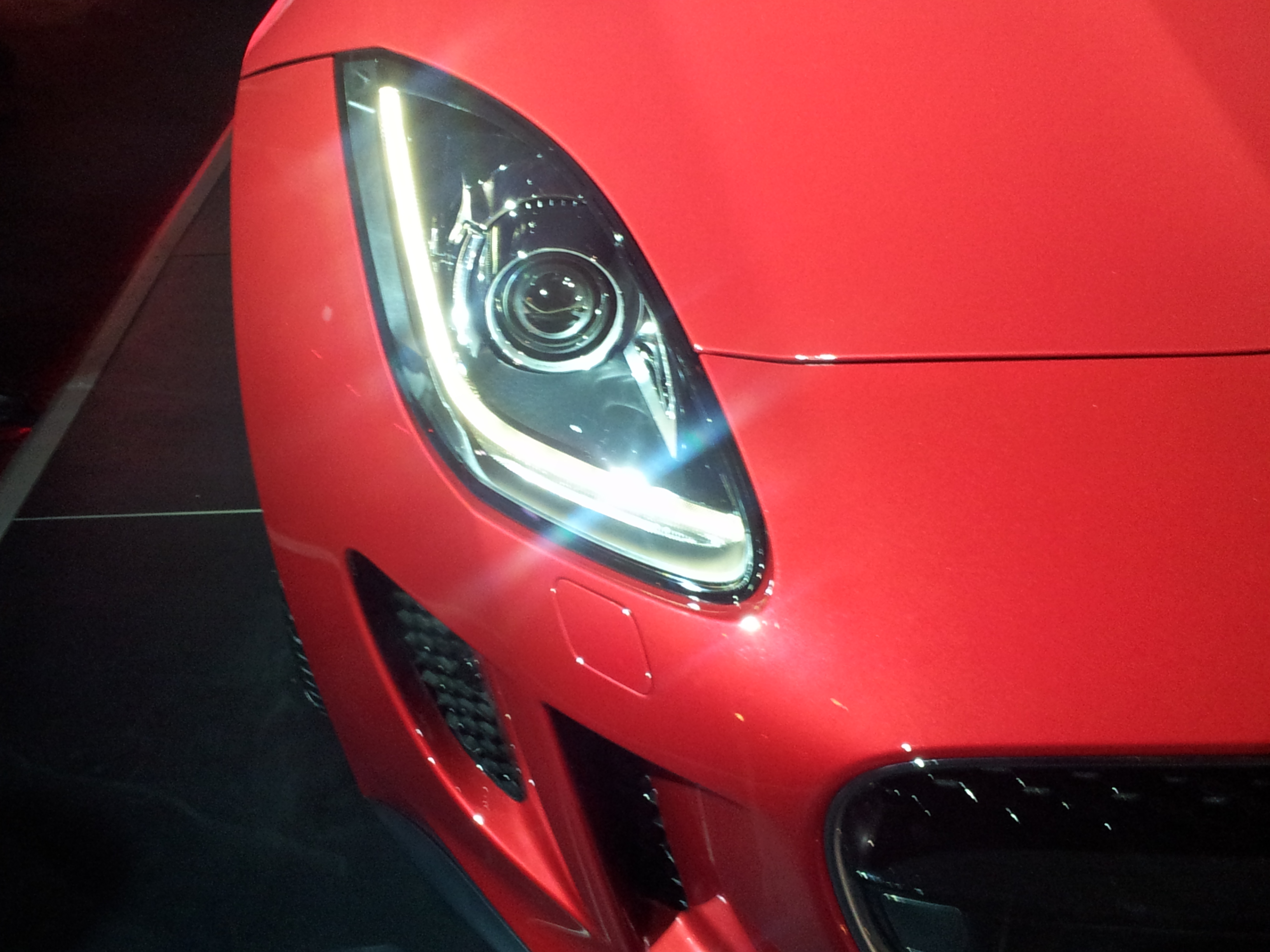 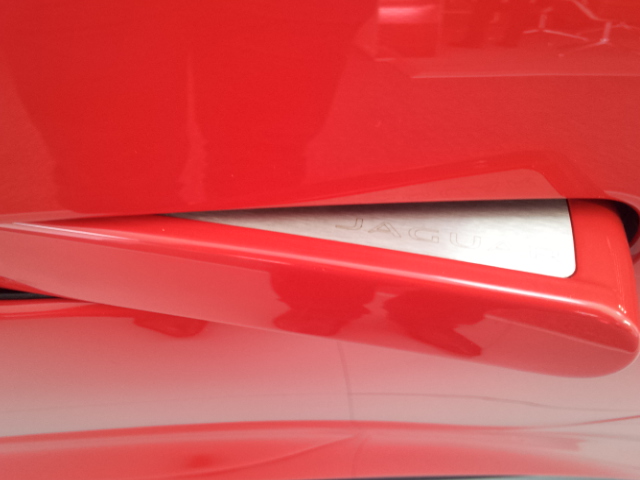 Job well done for Ian Callum and his team who in no small part have helped to make Jaguar cool and wanted again. When we spoke to him he said that he always wanted a pure simple design and one which could be drawn easily in profile form with two simple lines. He also confirmed that originally they wanted the overhang shorter at the back but packaging constraints (the need to carry golf clubs) put pay to that.  That said even J-Lo in her heyday could not compete with the pert rear on this little beauty. 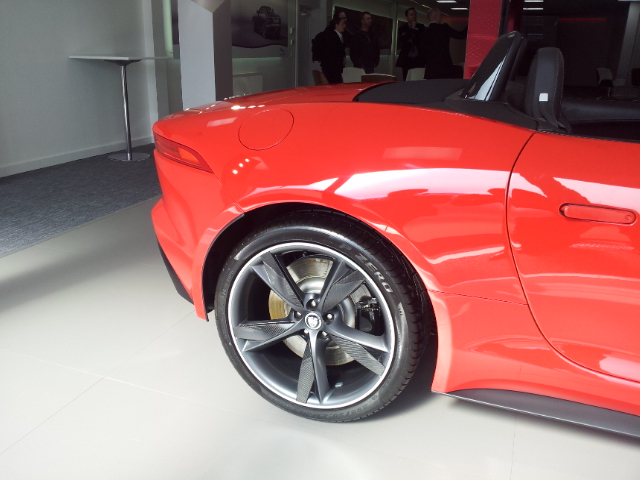 The choice of Salsa Red as the launch colour was pure genius as it really plays to the superstar look of the car and yet red was nearly never going to be a colour option for F-Type. Mr Callum himself had to push the engineering team hard to ensure that a red was available to specify believing this was the colour most suitable for the car. He has since been proved right given that a bulk of the orders are for red cars.

Step inside and it’s all about the driver with a centre console angled towards the seemingly most important occupant of the car. All switches are within touching distance too and the fit and finish is of high quality. Unlike other Jaguars, where dashboard dials are artificially represented by a computer screen, they are conventionally represented in F-Type with old fashioned needles set inside chrome bezels, just like a sports car should be. Special mention should be given to the seats too which grip like a bear with adjustable side bolsters should you find one bear hug is not enough. 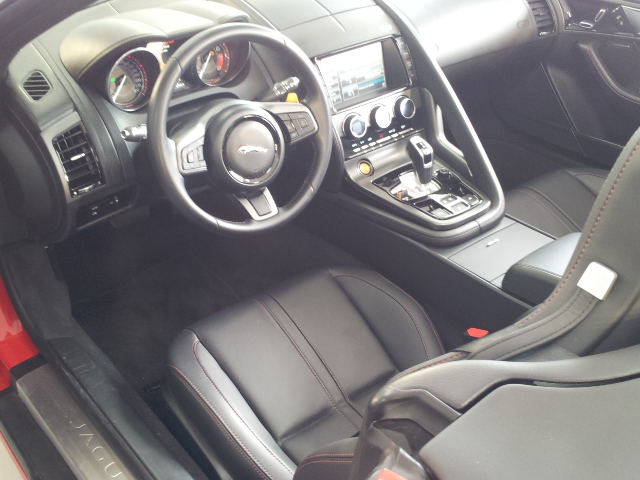 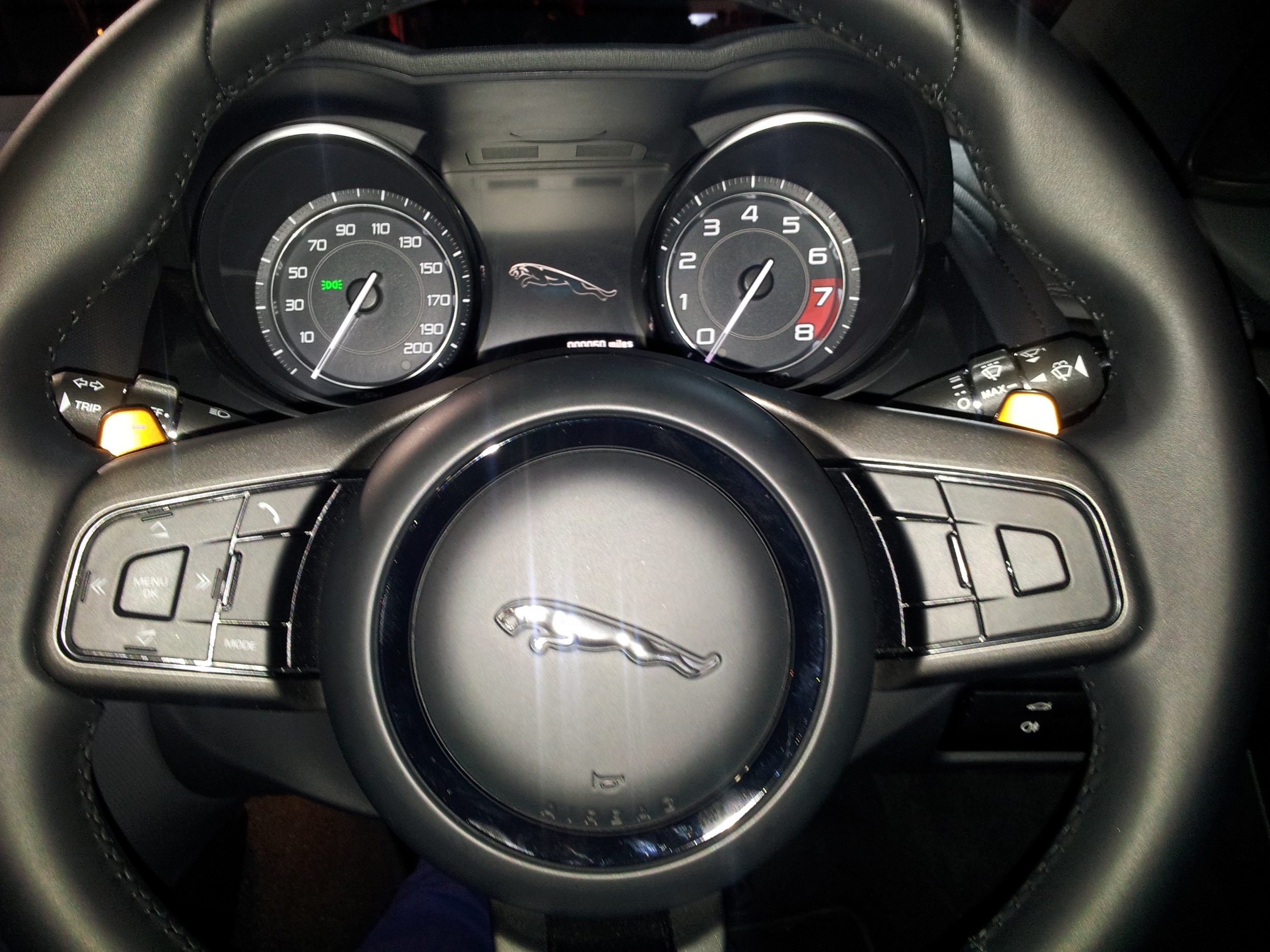 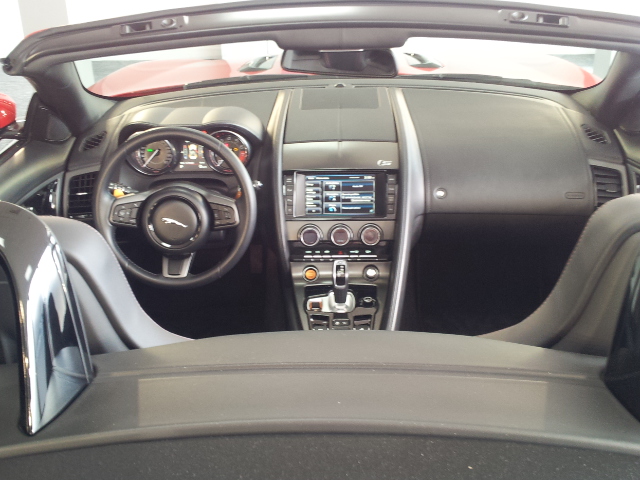 The boot is shallow with an odd shape but I am assured that it will take two sets of golf clubs and there’s even a place for your crate of Barvarian beer (a must for the German market apparently). 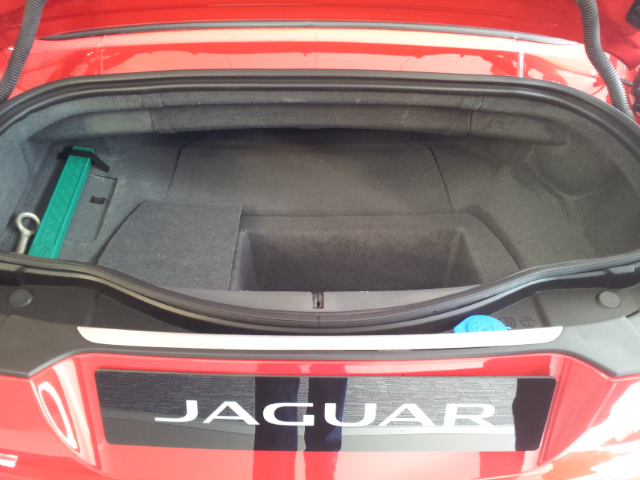 All engines offered are supercharged with, as yet, only an automatic transmission. Should a sports car only be offered with an automatic? It is debateable but, in fairness, Jaguar have form in this area offering excellent smooth-changing gearboxes with the dual ability to manually change via steering wheel paddles. However, if you listened carefully to the hints made by Jaguar engineers at the event, a manual transmission will be offered in time.

The base engine is a 3.0 litre V6 offering  330 bhp (brake horsepower) which gives strong performance of 0-60 mph in just over 5 seconds and a top speed of 160 mph. Step up to the V6S and you get extra strong performance thanks to 380 bhp, a 0-60 mph time of 4.8 seconds, a 170 mph top speed and a sports suspension with adaptive dampers to give improved road holding.  For rocket-ship performance, tick the box for the supercharged V8 model which offers near enough 500 horsepower which translates to a 0-60 mph time of 4.2 seconds and a theoretical top speed of 186 mph. You can spot the difference between the V6 and V8 models by the fact that the bigger engine model gets the loud and proud four exhaust pipes. 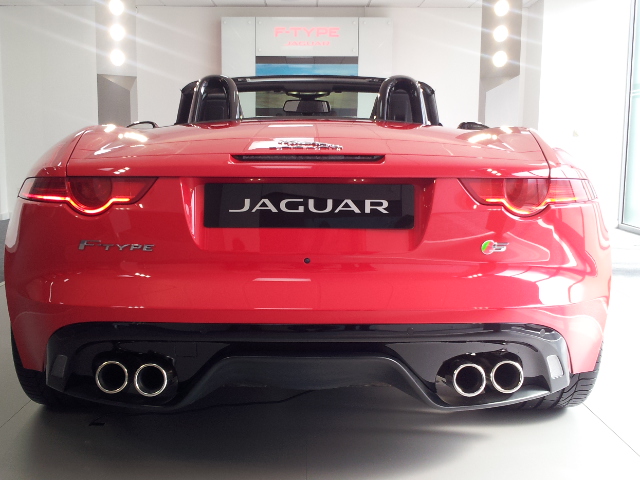 We will be driving each model in the months to come which as you can appreciate is a difficult task but stay tuned for a full MyCarCoach in-depth drive review shortly.  In the meantime, please feel free to contact us for more information on any of the above!