‘A what?’ seemed to be the general consensus. Indeed, the Suzuki Kizashi is a car not many people are aware of. Having seen a Kizashi on the Alpine Course at the Millbrook circuit a few months ago, I was itching to review one – and I’m glad I did! 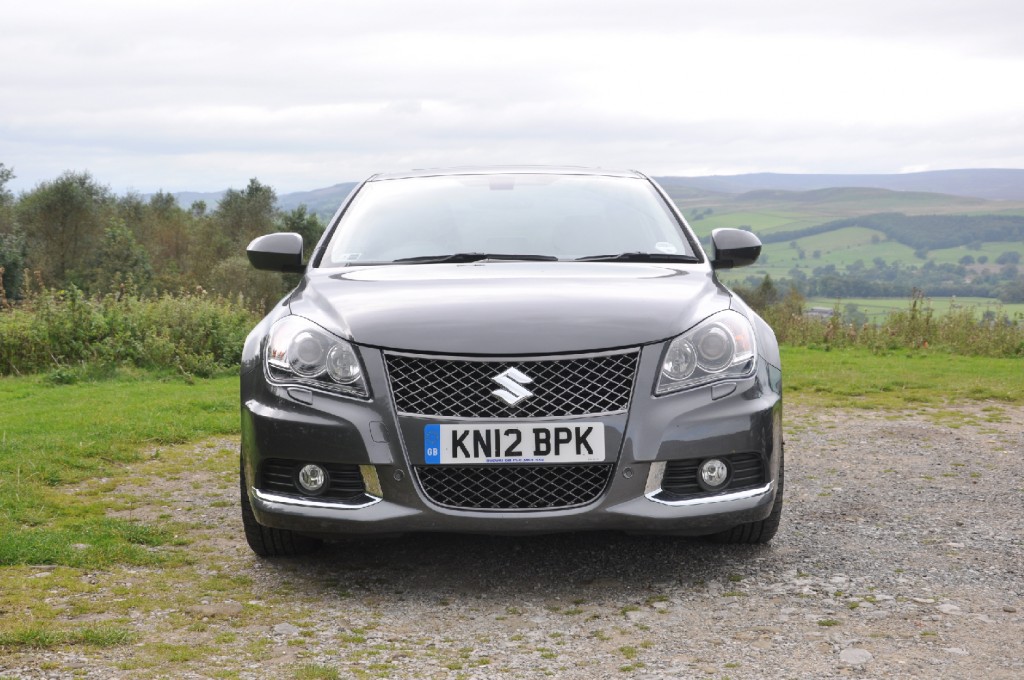 The Suzuki Kizashi is the Japanese firm’s new D-Segment offering, meaning it’s a mid-size family saloon – and a sporty one, at that. To me, the Kizashi looks great with its muscular, chiselled, sporty and rakish exterior design. From some angles, the Kizashi isn’t dissimilar to the IS and LS Lexus models, and some may suggest I should take a trip to Specsavers but I think it’s even got a whiff of Honda and Chrysler about it, too. It’s substantially more attractive to look at than the D-segment offerings from Volkswagen and Toyota. It’s a bit smaller than a Mondeo or Insignia and its design looks equally as eye-catching as theirs in my opinion, plus it will be a whole lot more individual due to Suzuki limiting Kizashi numbers in the UK to only 500 during 2012. Another D-segment car which is somewhat overlooked is the Kia Optima, which I still really love the design of. If I had to choose a D-segment saloon based on looks alone, it’d be a toss-up between an Optima, a Kizashi and a Volvo S60. 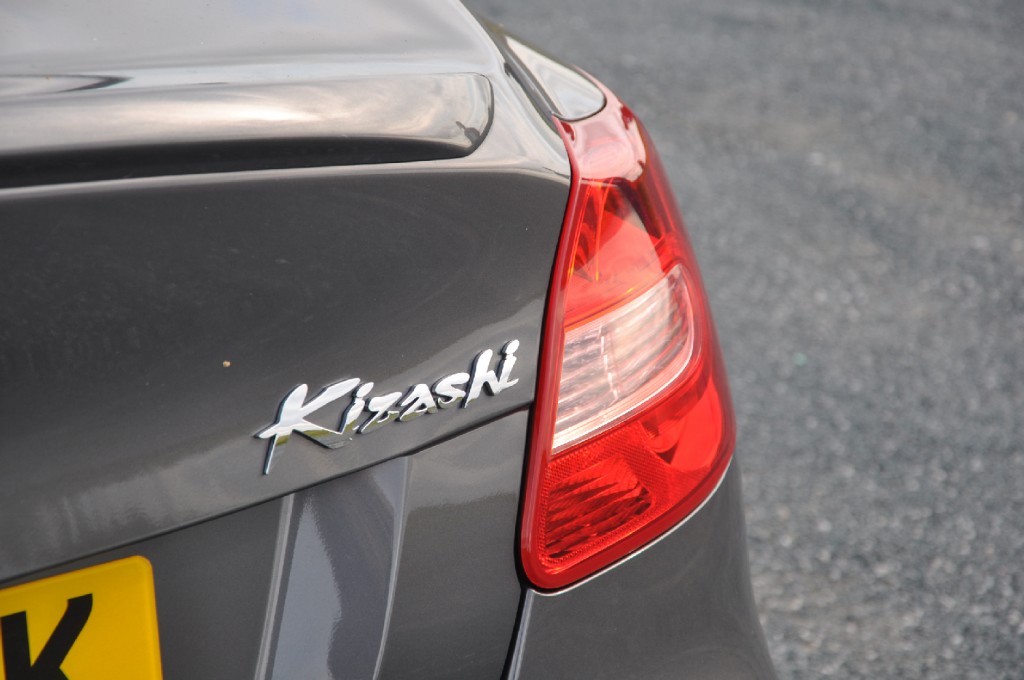 On the Kizashi, everything from the chrome accents, purposeful grille, sporty side sills and front and rear spoilers, to the shiny 18” alloys and tinted windows looks great, without being tacky. And one can’t fail to notice the gaping chrome exhaust surrounds, which really do add a nice finishing touch to the Kizashi’s styling. I asked a friend how much he thinks the Kizashi is priced at and he said £35,000, so it goes to show that it can hold its head up high in esteemed company. Loads of people gave the Kizashi a double-take as I drove past, which certainly confirms that its design isn’t boring, looking more like something from across ‘the pond’ than a ubiquitous Eurobox. Well done, Suzuki, for making the Kizashi actually rather tasty. 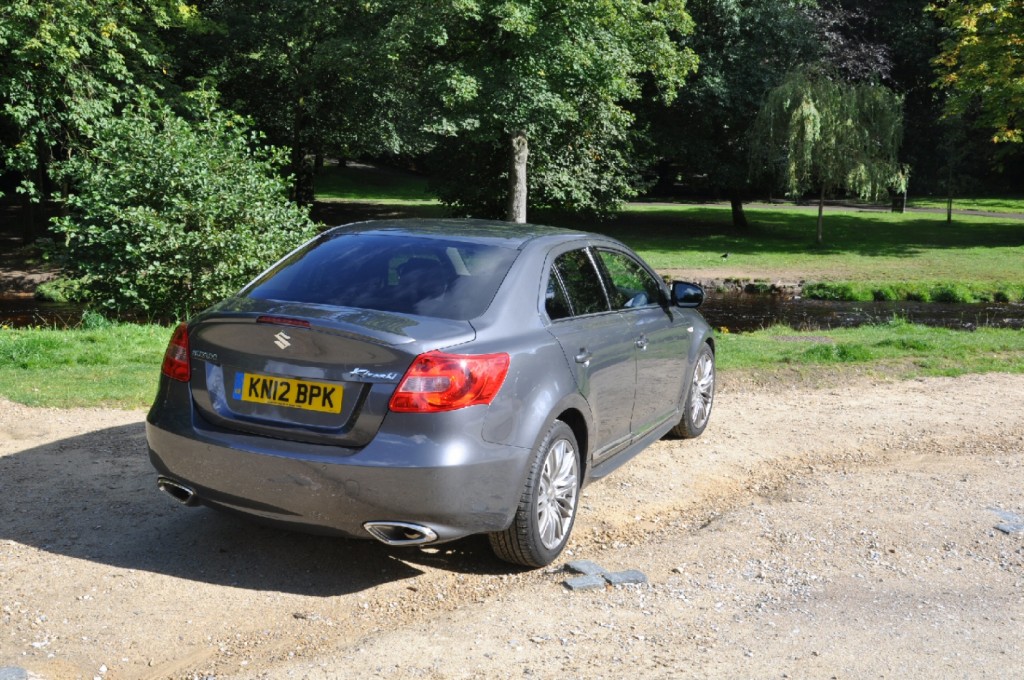 Perhaps Doctor Who was on the Kizashi’s design team, as it’s like the Tardis inside! There’s oodles of space in the front and rear, even for 6-footers. To my surprise, the front passenger seat was electrically adjustable as well as the driver’s, which just shows what a high specification you get for the Kizashi’s relatively modest price tag. The leather seats proved super comfy in the front and back, the steering wheel was adorned with perhaps a few too many controls and buttons but was otherwise very tactile, the centre stack is similar to the Swift’s and uses large, clean-looking buttons and displays and the gear shifter and handbrake felt robust and of a good quality too. The dashboard itself is soft-touch and I could tell Suzuki have really put some effort into making the Kizashi as luxurious as possible, but you do need to forgive their use of some hard and nasty plastics in some places, such as the lid over the cupholders, the door bins and the buttons for the fog lights and parking sensors. Storage space in the Kizashi is great, with a two-section centre armrest, a large glovebox and decent door bins, and for charging your mobile phone, there are two 12V sockets in the front along with a USB connection. The full interior specification of the Kizashi is very generous indeed and includes leather upholstery, heated seats in the front, a very good 8-speaker audio system indeed with radio and CD, a Bluetooth phone system which isn’t the easiest system to use but generally worked fine, cruise control, electric windows, damped grab handles, four cupholders, dual-zone air conditioning, folding mirrors and a tilt-and-slide sunroof. 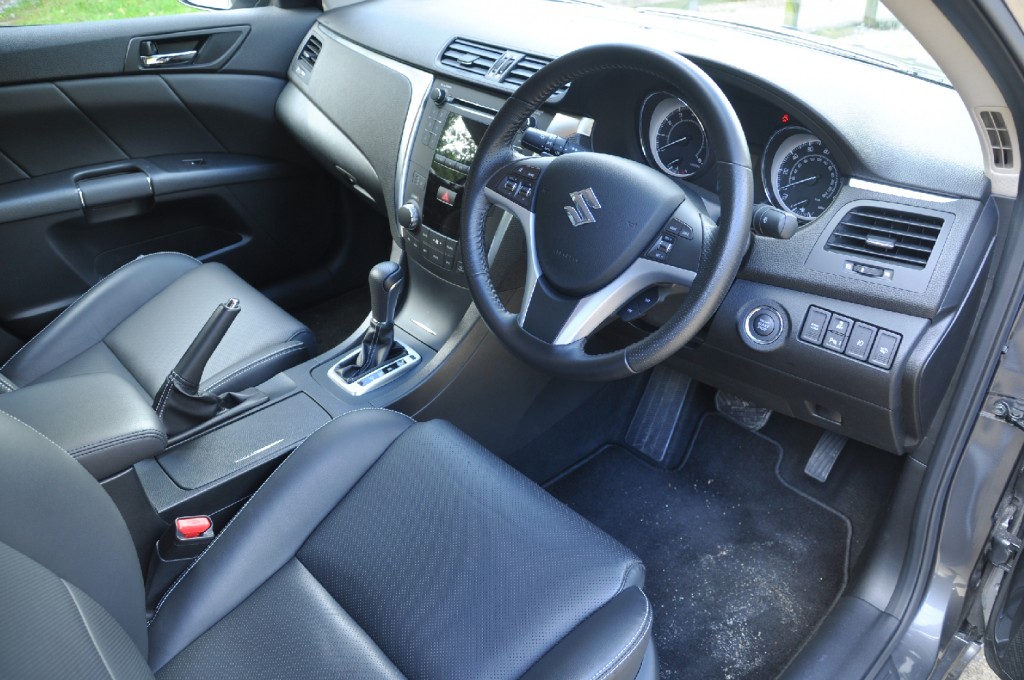 Sat behind a 6-foot driver, I still found I had plenty of legroom in the back, and headroom was really rather decent, even if I did feel my follicles touch the headlining a few times when I was sat bolt-upright. The rear centre armrest is large and houses two cupholders, but doesn’t contain any storage compartments. The rear seats split and fold and there’s the added practicality of a ski hatch providing access into the boot. To my pleasant surprise, I the rear seatbelts are positioned to the side of the folding seats, so unlike in so many other cars, I didn’t have to untangle the seatbelts when raising or lowering the seats. It’s just a shame to see nets used for storage in the back as opposed to proper pockets. The shape of the rear door apertures makes for easy access and the boot is massive. Ok, the actual figure is 461 litres, but it’s real life that counts, and the Kizashi’s boot was impressively still half empty after accommodating our usual weekly shopping. A pronounced lip does hinder load-in somewhat and the boot lid flops open lifelessly and needs a good slam to close it, but these are only tiny points. All in all, the Suzuki Kizashi’s interior is a very good effort indeed. 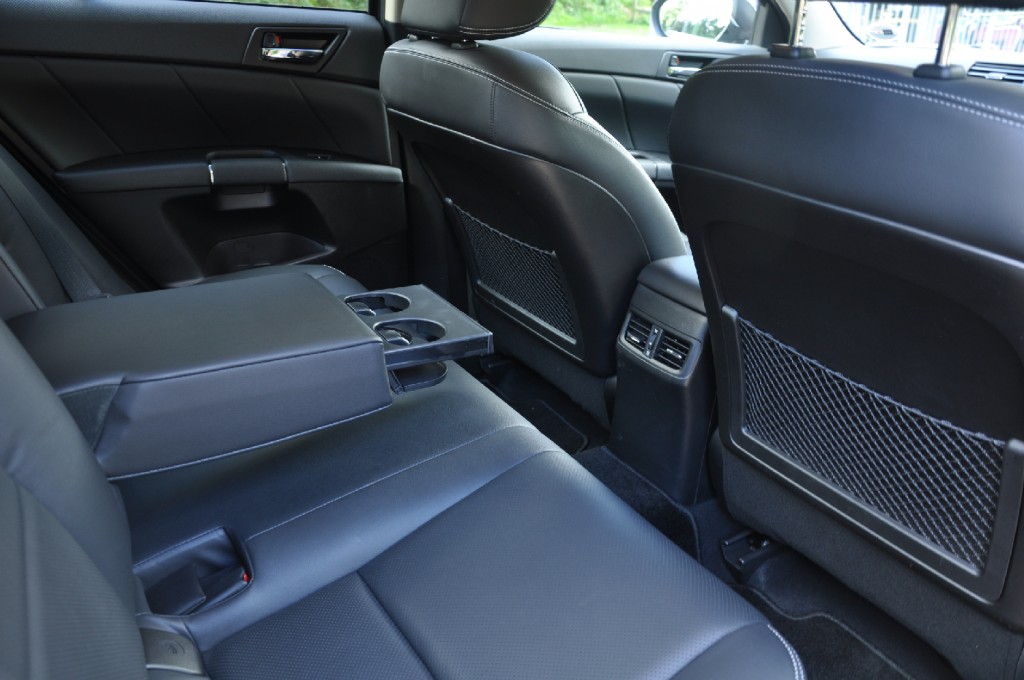 Push the start button and the Suzuki Kizashi fires into life with a muted burble. Nothing spectacular, but the exhaust note coming from the two huge orifices at the back gives you a hint of things to come. The Kizashi is only available with an automatic CVT gearbox, which has been tuned for performance but doesn’t really deliver in this regard. Release the traditional-style handbrake, gently press the ‘go’ pedal and the Kizashi generally pulls away quietly and smoothly. Its smoothness is somewhat spoilt by the electronic whirring, whining noise the gearbox makes especially in lower gears and the bizarrely diesel-like sound it sometimes made when I accelerated more forcibly, and I found the gearbox jerky at times, particularly when accelerating again after having stopped to let traffic passed on a narrow street. But although the gearbox may in some ways be the Kizashi’s Achilles heel, I learned to live with it and soon began to enjoy the car’s characteristics – and character counts for a lot. 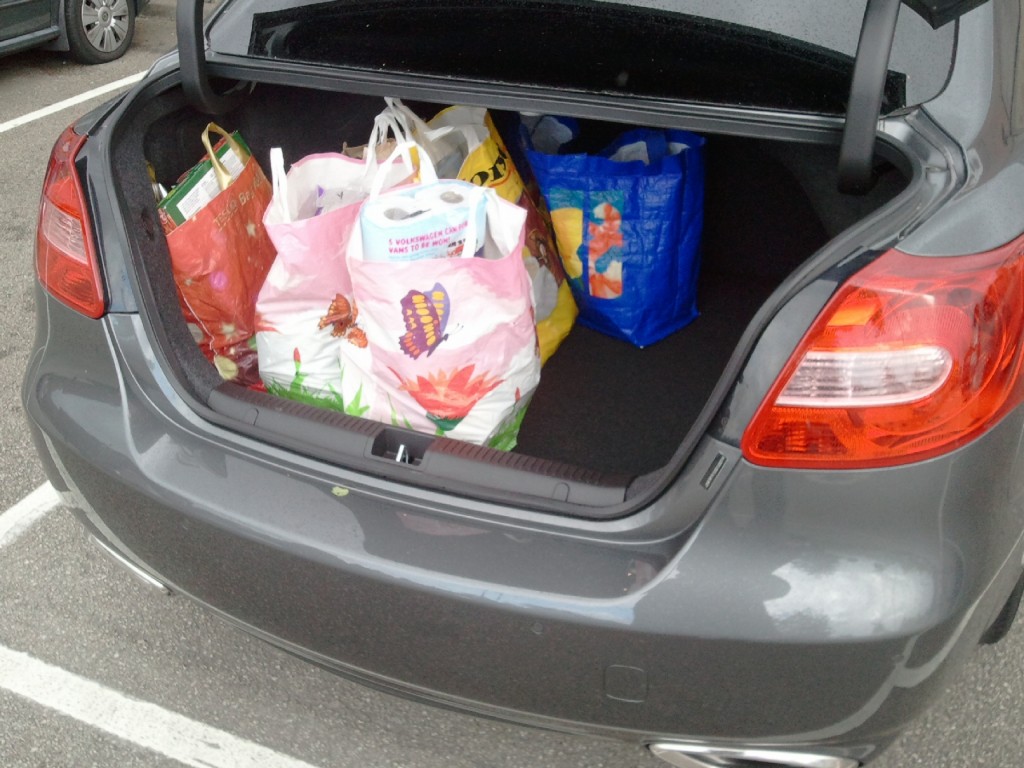 When the gearbox was in the mood and wasn’t dishing up any jolts or whirring, whining noises, town driving was a joy on the whole and because the Kizashi isn’t a particularly big car, smaller than a Mondeo and more akin to an Octavia, it was easy to pilot through the urban jungle. Reach an A or B-road with pace in mind and you’ve got two options – either keep it in automatic mode and pick up speed pretty quickly but putting up with the quite raucous and horrible whirr of the gearbox and engine, or push the gear selector over into manual mode and change up using the selector itself or the paddles behind the steering wheel. I often chose the paddles and a whole lot more fun was injected into the experience. Power delivery was much smoother this way, not coming in a surge after the worryingly long time in which automatic mode holds onto a gear. The 4-cylinder, in-line, DOHC 2.4-litre petrol engine is derived from that in the Grand Vitara, the stalwart of the Suzuki range, and its 178bhp feels more than enough in practice. On paper, though, the brake horse power figure does look confusingly low, compared with engines such as Ford’s 1.6 EcoBoost which actually produces more horses. Still, the Kizashi is a relatively light car and the acceleration will be plenty for most people. The official figure is 8.8 seconds to reach 62mph and with a top speed of 127mph and suffice to say, the Kizashi does feel quick, especially if driving the car in manual mode. 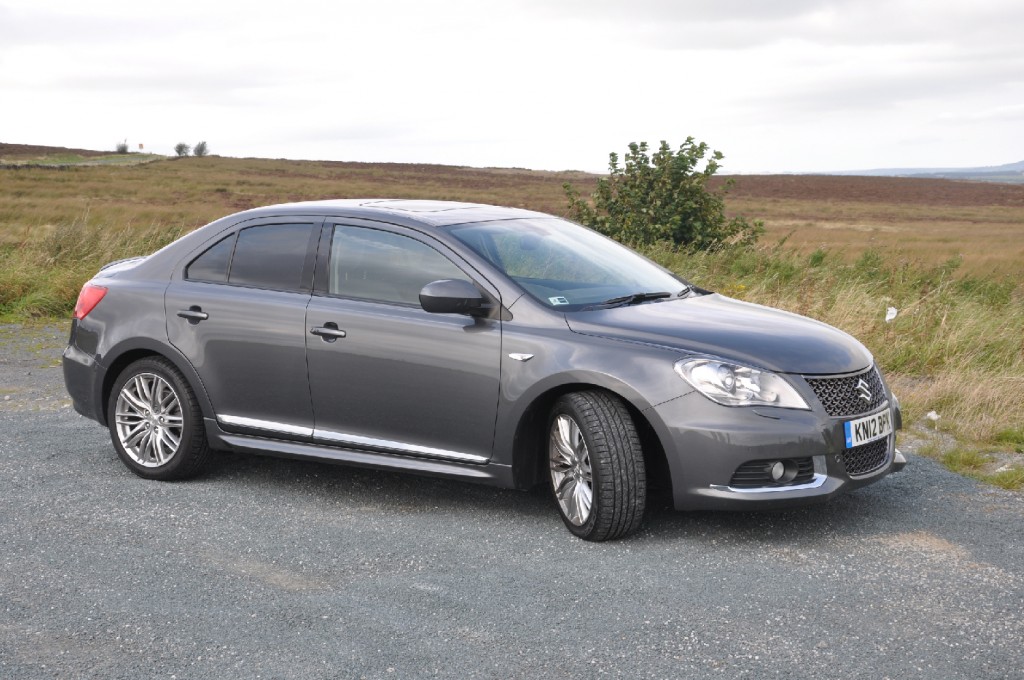 Another superb strength apparent in the Kizashi is its brilliant handling. Okay, the low profile tyres did transmit a few bumps through the cabin and some rutted surfaces unsettled it at times, pushing the car left or right, but on the whole, the car was an absolute joy to drive on twisty country roads and instilled a heck of a lot of confidence in me from early on. Body roll in sharp bends was hardly noticeable, the car handling like it was on rails, with sharp, precise steering. Okay, some may find the steering to be on the light side, but it made the car feel lighter, more nimble, more manoeuvrable. Visibility was great thanks to the large mirrors, all the controls fell nicely to hand and for even better grip, all I needed to do was press the AWD button. It works via an electromechanical coupling system and although I didn’t test the Kizashi on off-road surfaces, it did seem to increase the car’s planted feeling even further on undulating bends and wet stretches of road. Like with Quattro, the all-wheel-drive system in the Kizashi is there for improved road safety and handling, not green-laning. The excellent, comfortable driving position and decent rear space gave my three passengers and me a real sense of safety, allowing us to enjoy the Kizashi driving experience. This car was dishing up fun by the bucket-load!

But I must now mention its pitfalls. Firstly, Suzuki are only releasing 500 Kizashi cars in the UK in 2012 and all of them will be 2.4-litre petrol models with automatic gearboxes, as it’s a one-size-fits-all kind of car and approach. Although the Kizashi is in actual fact better compared with equally leftfield cars such as the Subaru Legacy, Suzuki are hoping it will steal some sales away from Ford and Vauxhall. But buyers looking at popular family saloons and hatchbacks like the Mondeo, Insignia and also the Skoda Octavia which is of a more similar size to the Kizashi, will mainly choose the diesel versions. So the petrol Kizashi with its published combined fuel consumption of 34mpg (I averaged just over 29mpg during my week with it) will put a lot of people off in economic terms. The Kizashi’s emissions are also high at 191g/km, which will alienate some green-minded folk. Then again, there are plenty of people out there who don’t have long commutes, aren’t overly worried about the environment when it comes to their cars and view them as something more than simply a means of getting from A to B. So with its charming handling, Suzuki will hopefully find good homes for all 500 Kizashi quite quickly, their owners likely being petrolheads who don’t cover high mileages and can stomach the car’s undeniable thirst. 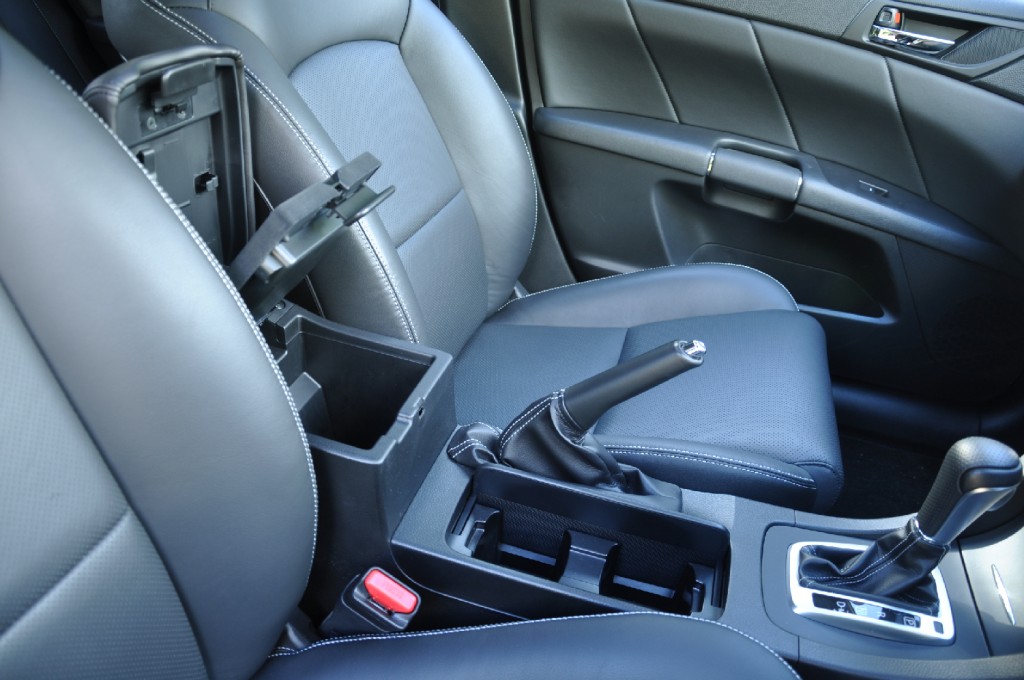 If you’re after a medium-sized family saloon which offers good practicality and has great handling, I strongly recommend that you test drive a Kizashi as long as you bear in mind that it likes a drink at the pumps. The CVT gearbox is the other main weak link in the package but once you get used to it and learn to shift manually, it does become more bearable. The Kizashi wants for nothing in terms of specification, the only option being sat nav. It has a very conformable and spacious interior, it will bring a smile to your face the majority of the time, it’s built to last and what’s more, there’s not a sprinkle of badge snobbery associated with it. Go on, be an individual.

Specification of the Suzuki Kizashi automatic tested in this review

Standard Specification includes (but not limited to):