Hands up then, who has heard of the term ‘downsizing?’ Any takers? No? Well ‘downsizing’ is a term used to describe the trend for installing a very small engine in a car which translates to low running costs but improves the power output by adding a turbo or supercharger. The theory is you get an environmentally friendly car that does not operate at a snail’s pace but does it work in practice? 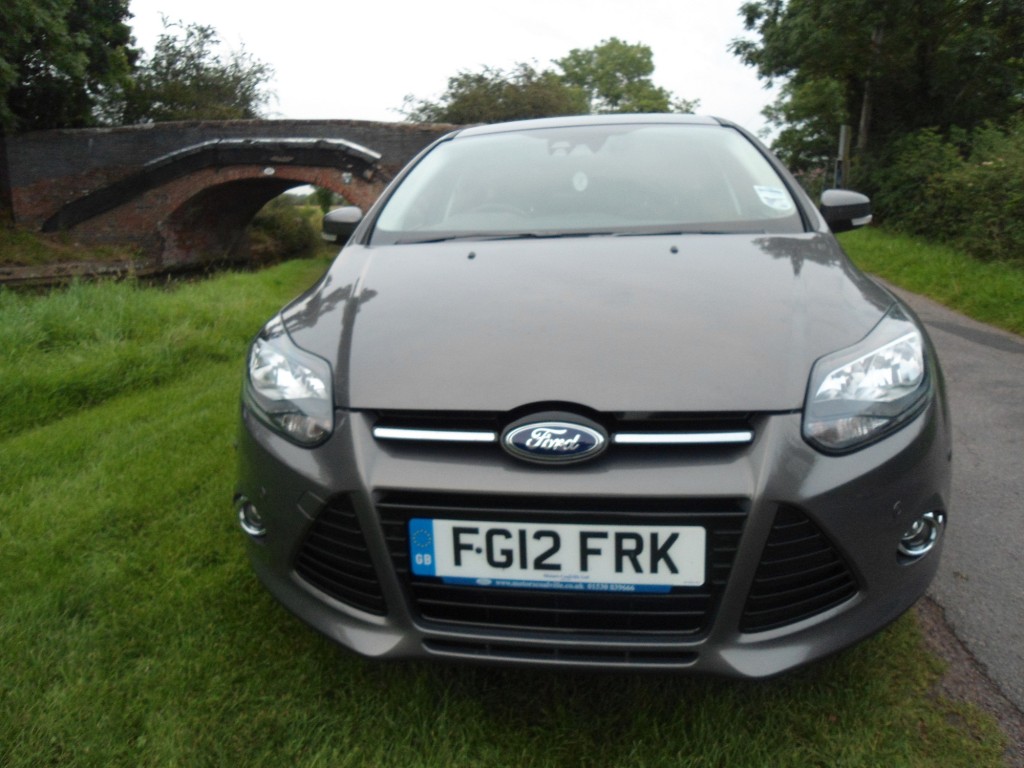 The only practice I have to go on is Fiat’s magnificent and much praised tiny two cylinder TwinAir engine (read our review of that engine in the Fiat 500 here: https://www.mycarcoach.co.uk/news/category/car-reviews/fiat/) which works exceptionally well despite its minature size. But here come Ford now and they’ve turned up to the party with this, the 2012 ‘Engine of the Year’ no less!

Taking a closer look reveals a tiny 1.0 litre, three cylinder engine which has been slotted in to what is a relatively large car. To give you an idea of how small this engine is in relation to the car it’s powering, take out a piece of A4 paper and notice its dimensions; they are the same as this little diminutive unit. A ‘normal’ engine in comparison would be twice the size, so maybe after all, good things really do come in small packages! 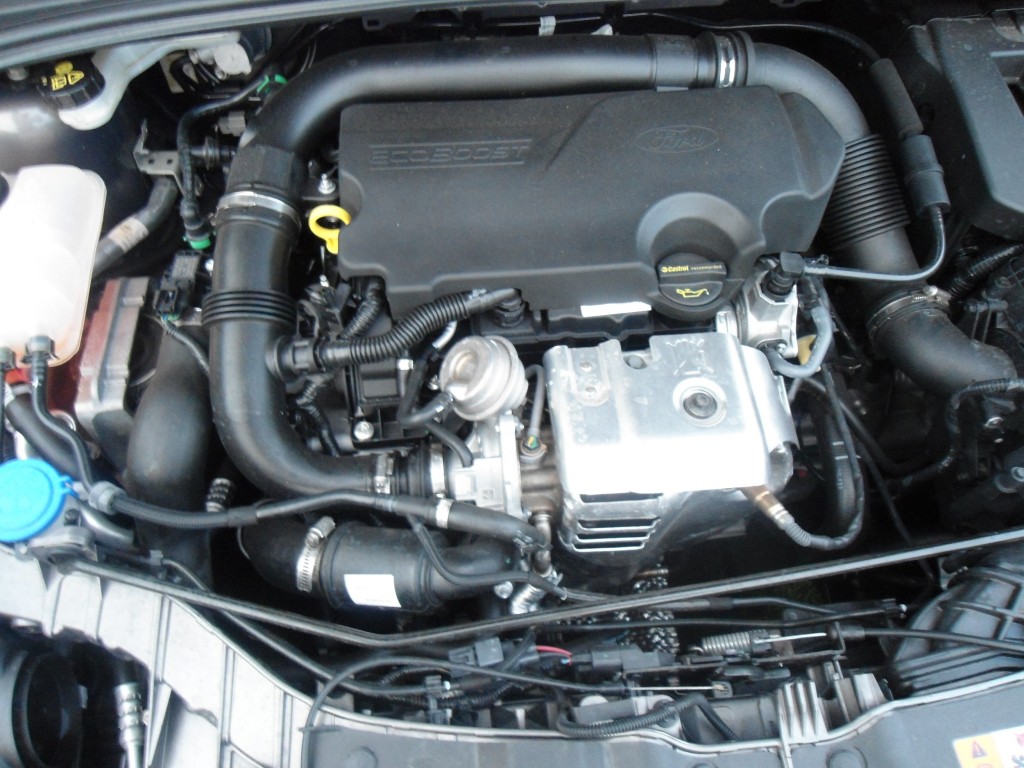 Through the use of a turbocharger this engine matches the power of a bigger 1.6 litre engine but in return for its A4 paper size, it provides the owner with a 20% improvement in fuel economy, or 56 miles per gallon to you and me. 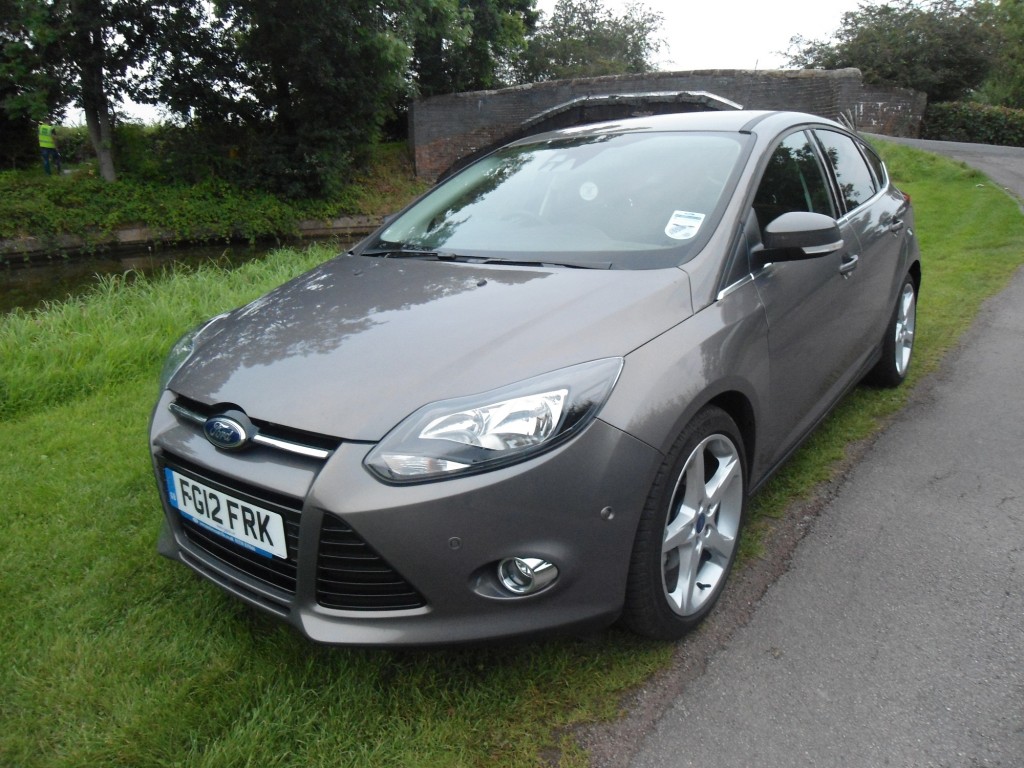 The original Focus, when introduced, was a landmark in automotive design and heralded a new era in design led family cars. 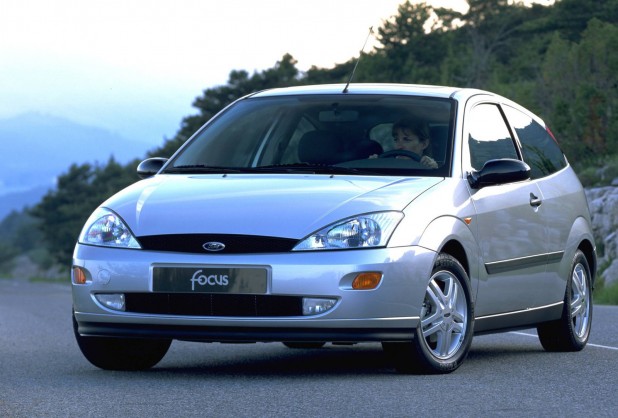 The new model does not have the same ‘wow’ factor but then it has been designed to appeal to a global audience so it had to be suitable to all people in all markets. That being said, in some design areas the car seems a little fussy, for example, where the overly large rear lights join the rear quarter panel. 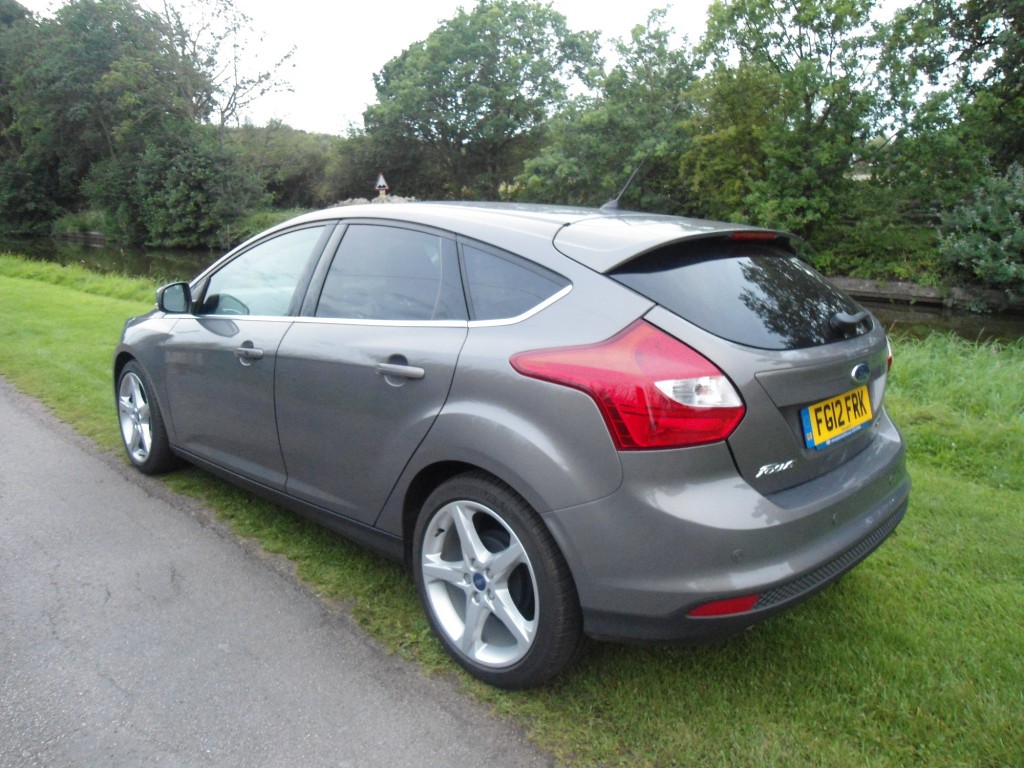 This new Focus is also very sensitive to wheel choice too where only the larger wheel options really work with this latest design language. Specify one with the smaller wheels and that modern design language doesn’t quite translate, giving the illusion that the body shape has got all saggy and droppy in the midday sun.

Having a closer look, there’s still some neat design touches to be found like the LED lighting, chrome highlights around the front fog lights and a trick gadget in the front grille which closes the front vents to reduce drag and increase efficiency when needed. 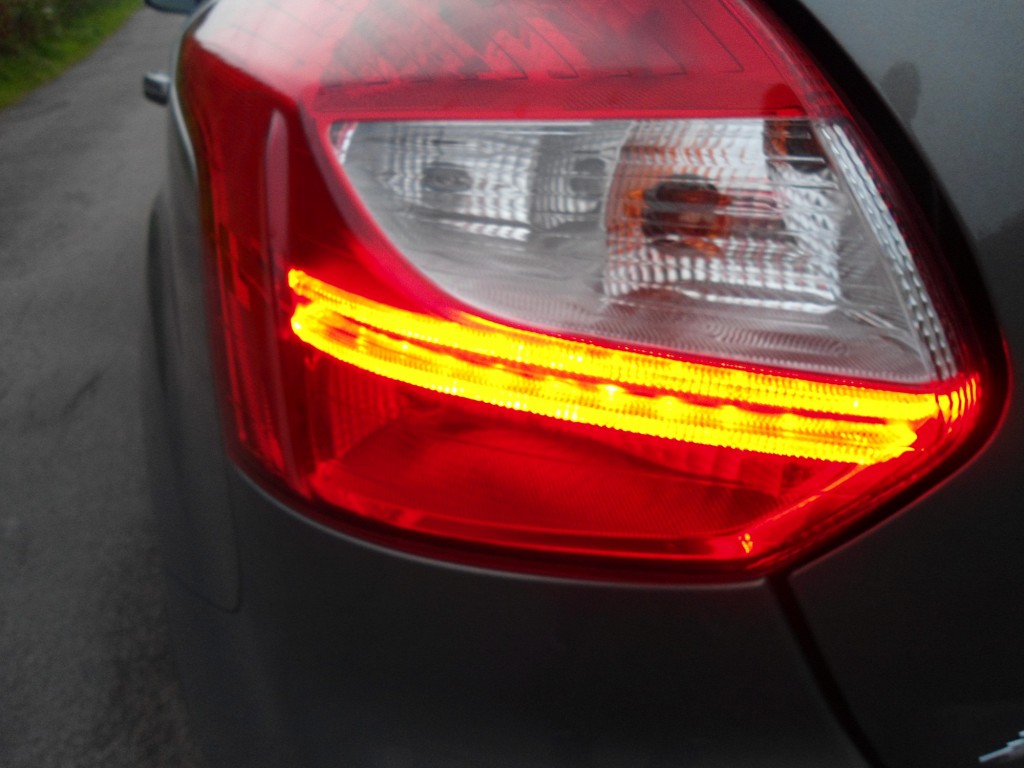 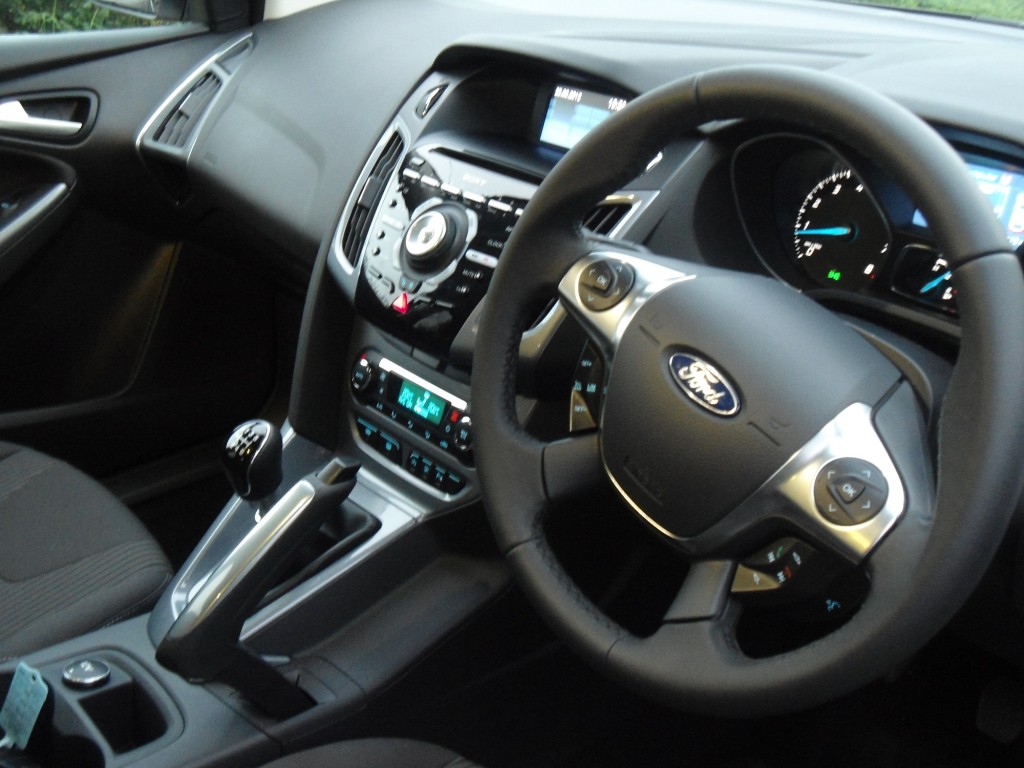 Before I move on to this section, a little background first if I may. Ford have a problem and it’s one of being caught between a rock and a hard place. The brand is still seen by many to represent value for the every man and woman, but firstly they can no longer compete on being the best priced with the recent influx of cheaper Korean alternatives from Kia and Hyundai. Secondly, they cannot substantially increase their prices as, in doing so, would put them on an even keel with perceived smarter German rivals, notably BMW and Audi. So what do Ford do? They attempt to bring a ‘third way’ to the table by offering a car that is priced mainstream but is crammed full of the technology that normally would be associated with much more expensive cars.

You want a car that can park itself? The Focus can! Monitor the road ahead to warn you of the speed limit? The Focus can! Warning you if you drift out of your motorway lane? Yep this Focus can do that too! Offer cruise control that can brake automatically should the car in front slow? You guessed it, this Focus can! Admittedly, some of the above technology is an optional extra but you get the picture; it’s a Mission Control on four wheels!

Step inside and you will notice Ford have spent a lot of investment in improving the perceived quality of the plastics and switchgear. It feels solid and resolutely expensive, emphasised by the Sony entertainment system which dominates the central console. 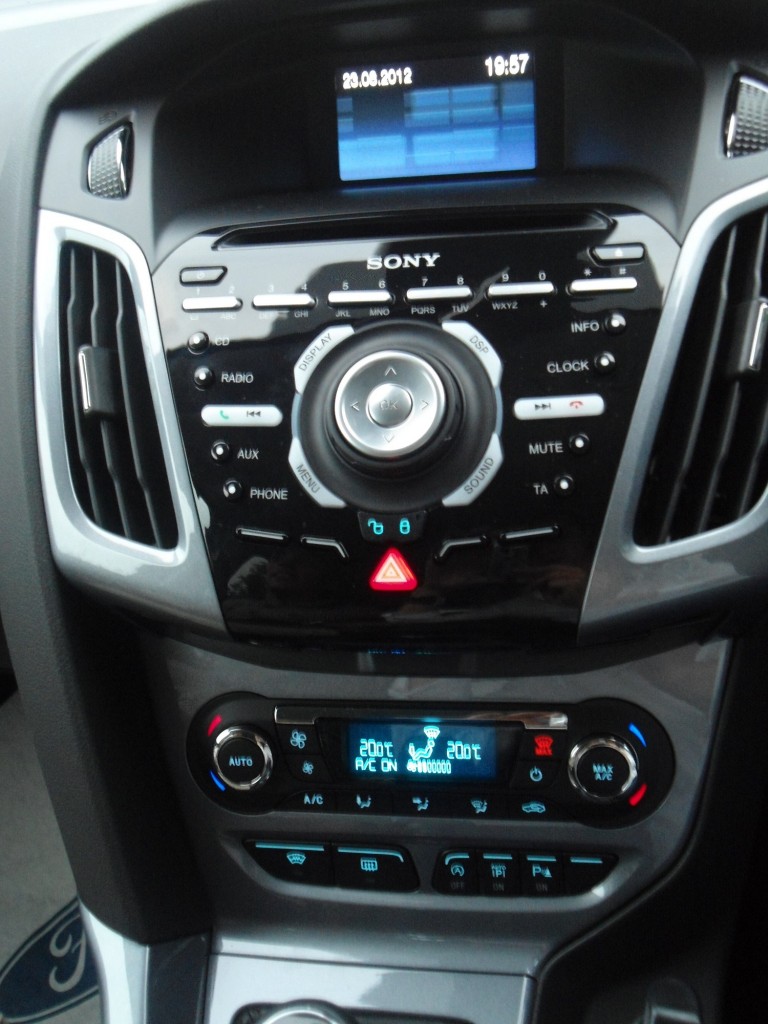 Other touches include a very modern driver display featuring that ever useful speed limit warning, a steering wheel festooned with more buttons than the Starship Enterprise and an interior that is bathed in ultra-modern blue LED light. 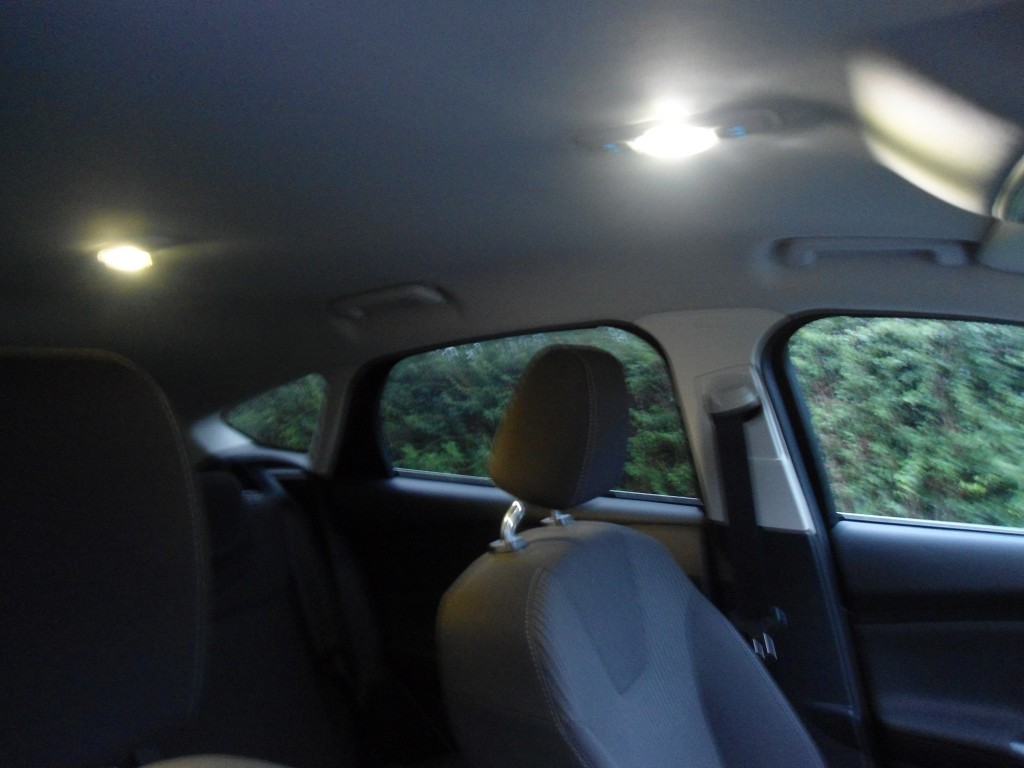 Linked to the above, Ford have realised that to sell cars in this modern age with ever more discerning consumers, you constantly have to raise your quality game and they have responded. This Focus felt thoroughly well made with a high quality feel throughout and, whisper this, you could be sat in a Volkswagen if you closed your eyes. That should be music to the ears of Ford’s Directors as VW is seen as the benchmark in the history for perceived quality.

In fairness, this is not a cheap car but in choosing a Ford today, it means you are no longer reminded of its everyman origins.

If ever an engine maketh the car, this is it. This 1.0 litre Focus provides an ideal demonstration of a car and engine that are so perfectly managed. The tiny A4 sized dimensions mean you have an extremely energetic lightweight engine and, when slotted into a car that was already blessed with superb handing, you get a fine driver’s machine.

Drive the car hard and it will respond by offering neat and tidy handling, helped with that lightweight unit out front and a surprising throaty roar. If I say it is a little, with the emphasis on little, a bit like the classic engine note you get from a vinatge Porsche 911. Think I’m joking? Try it for yourself. No other hatchback in this family marketplace can deliver such thrills like the Focus and it’s a relief that the Focus is still the benchmark for those of us who care about driving.

Special mention should also be given to the engineers who have managed to install a three cylinder unit and avoid any of the rough running characteristics associated with such engines. Anyone who dared to ride with me in this car gave me their best guess as to the size of the engine; the average? 2.0 litres! That tells you all you need to know about this marvel of an engine and proves that you do not need to have masses of power to have fun.

However, there is a common problem with a lot of these ‘downsized’ engines and that is they encourage a little too much fun. These little engines tend to give their best performance at higher engine speeds meaning you have to keep your foot pressed down for longer, no hardship when accompanied by a nice noise to be fair. But, this is all very well for sporty driving but not so great for fuel consumption figures which is supposed to be the raison d’etre of these engines in the first place. I challenge anyone to get close to the claimed fuel economy figures; I managed a paltry 42 miles per gallon and not the 56 as claimed, but in fairness, I was having a lot of fun! So, the choice seems to be plenty of smiles per mile but average fuel economy all depends on whether you want your face or wallet to smile!

Sitting in this Focus makes you as safe as a bank vault in a nuclear bunker. It doesn’t get much better than receiving four awards from the car safety authority, NCAP (New Car Assessment Programme) and the first volume car to do so I hasten to add!

This high safety rating is played in no small part by all of the technology in the car which raises a good point, perhaps in ten years we may be talking about the ‘un-crashable’ car!

The Focus is sold as a family car and therefore has to be practical and cope with all the toils that come with that.

Ok, so the boot space is less than its nearest rivals (Volkswagen Golf, Vauxhall Astra) but you can easily extend this load space to a whopping 1,000 litres by folding the backs of the rear seats. It is certainly not a deal-breaker.

Rear legroom and space is respectable and it has to be said, comfortable too! Even loaded with two adults there is ample space, provided they’re not rugby full backs of course! 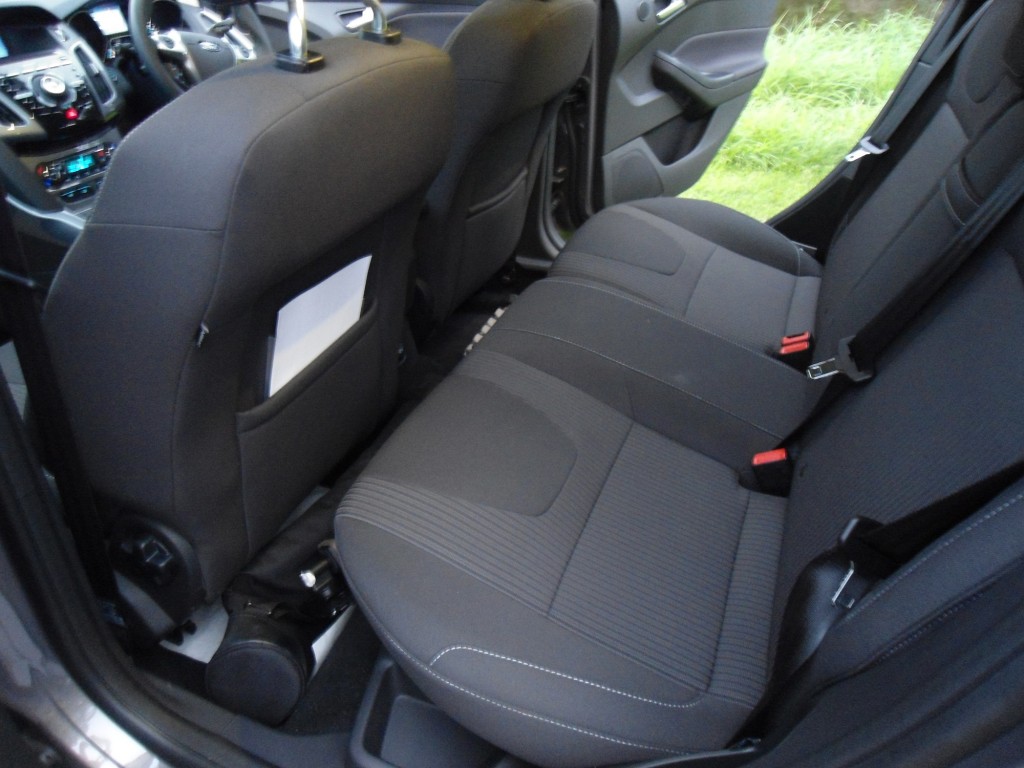 Another nice convenience factor is the ability to walk up to the car and unlock the car simply by pulling the door handle as the car recognises the key in your bag or pocket as you approach. This may sound flash but imagine now that you have your hands full of shopping and a screaming toddler, suddenly that gadget that seemed so pointless before is now a god send!

There is plenty of storage within the car too with deep door pockets and lots of nooks and crannies to swallow the paraphernalia of modern life.

Ford no longer go in for the ‘stack ‘em high, sell ‘em cheap’ mentality meaning that discounts are less generous than previously known. This does mean, however, that Ford models have stronger second-hand values which improves their ownership proposition.

This particular Focus has the added benefit of being the ‘eco’ model of the range and will always have strong appeal and demand keeping values high.

If this Focus 1.0 EcoBoost is a sign of the automotive future then it looks like it will be a bright one with plenty of ‘smiles per mile’. Here is a car that offers low running cost but delivers good fun at the same time. Cars like the Toyota Prius should take note, green does not have to be boring!

The MyCarCoach word of warning, however, is to not buy this car on its expected fuel economy benefits alone as in the real world you will not match the published figures. But, if you enjoy driving, want a practical car for you or your family and an element of ‘green’ credentials, then this should definitely be at the top of your list. 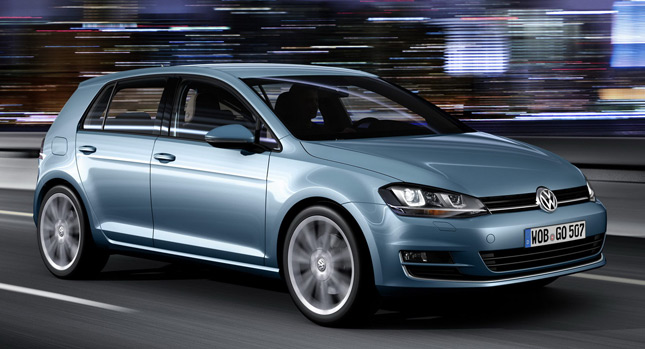 Pros: Benchmark in class for quality and refinement.

Cons: The Focus is a better drive and its design is definitely on the ‘play it safe’ side. 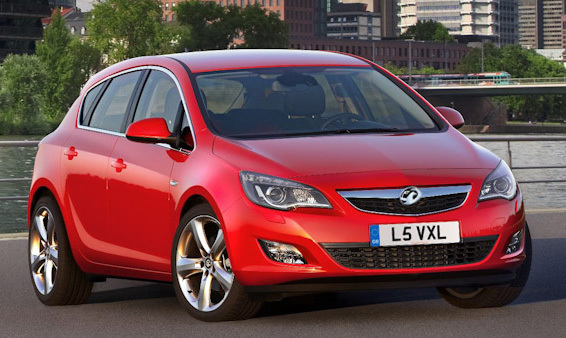 Pros: Great styling and with added practicality of having the biggest boot in its class.

Cons: Does a lot good but not great and again, the Focus is better for driver enjoyment.

A big thank you to the Ford Press Office for the loan of this car. Please do contact us if you would like to discuss any of the above in greater detail or would like to enquire into purchasing options. As ever, let us be your personal guide to choosing your next car.