Think Ford and chances are that a lot of you may well think Fiesta. Since its launch in 1976 the Fiesta has enjoyed a fantastically successful life – and still does to this day. The year 1980 heralded the first ‘sport version’ of the Fiesta, in the form of the 1.3L Supersport, which paved the way for the eponymous XR2. My first Fiesta memories are of the third generation model in the late 80s/early 90s, on family holidays in the Algarve. Around this time, ‘Zetec’ became the sporty choice of Fiesta. Twenty years on and the Zetec name, now assigned to the sixth generation Fiesta model in Zetec S guise, is still considered one of the best hot superminis on the market. Until the seventh generation Fiesta arrives in 2013 with its range-topping ST variant, Ford released a special edition hot Fiesta in the form of the ‘Metal’. What did I make of it? 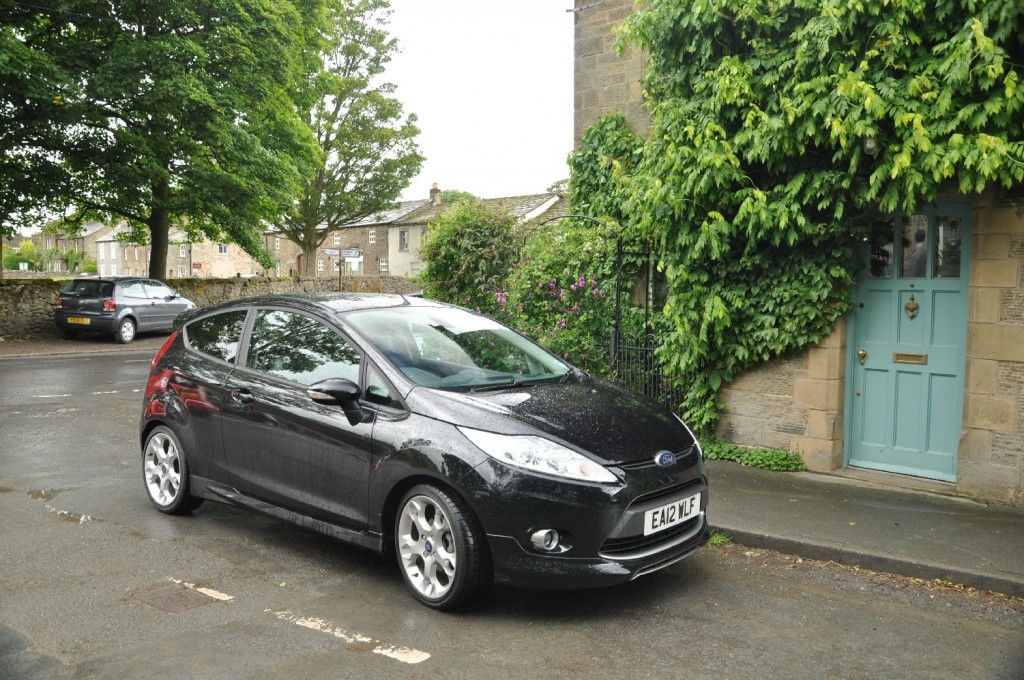 Ford’s marketing material for the special edition ‘Metal’ Fiesta usually features one in the ‘Panther Black’ colour choice, so I was delighted when my press car arrived in said colour. I would forgive the Fiesta Metal if it suddenly developed a voice and told me it was feeling a little apprehensive, as the previous car I reviewed was another warm supermini – a very good one, in fact, in the form of the new Suzuki Swift Sport. But on first impressions in the looks department, the Fiesta Metal needn’t worry as it’s a stylish and attractive car with a very respected image. The Metal edition of this 3-door, fun-oriented favourite is usually set apart by its Panther Black 17” alloy wheels, but unfortunately they had become so badly scuffed that the Ford Press Office decided to send my car out with the shiny ‘normal’ versions. I wasn’t bothered, as they still looked great. Other tell-tale signs on the Fiesta Metal include the silver-painted front grille surround, aerofoil and fog light bezels, the stainless steel scuff plates and the tasty chrome twin exhaust pipes – oh, and the sizeable rear spoiler along with the reworked, sporty rear bumper skirt. 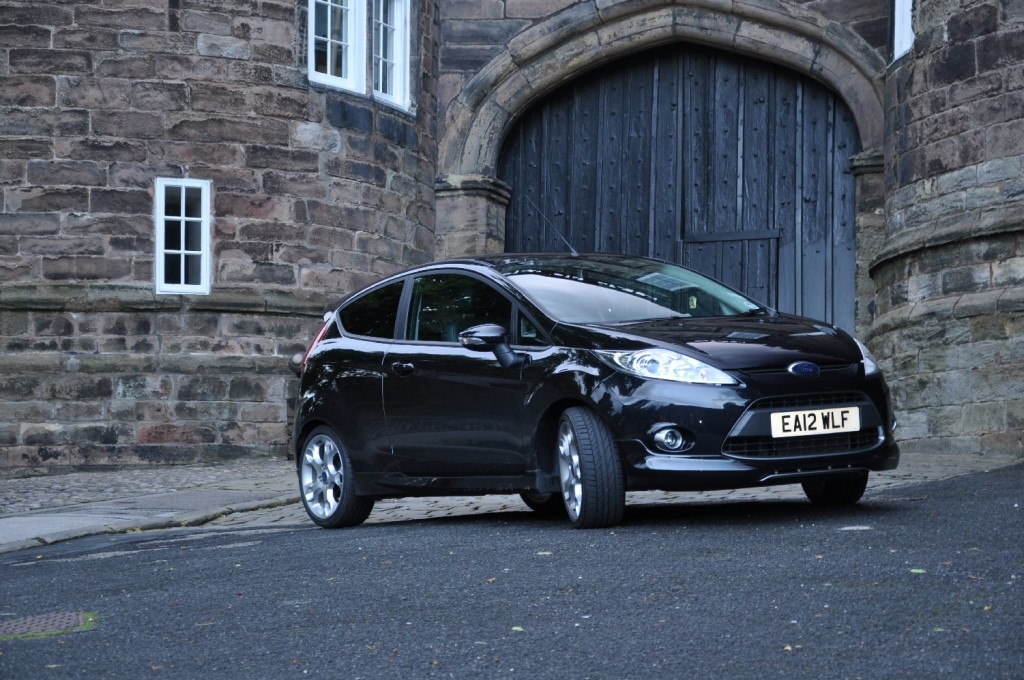 From the front, the Fiesta Metal looks sleek and menacing, in a cheeky kind of way. It looks classy in black, too, and the sweeping Halogen projector headlamps and chrome touches give it a kinetic appeal in line with Ford’s ‘jewel’ ethos for the Fiesta. Attention to detail can be implemented too strongly in some cases, but Ford have got the balance just right. Side-on, the doors are long, as you would expect from a 3-door hatch like this and all the lines flow nicely to the rear. The blacked-out privacy glass adds to the sporty appearance and at the rear, the light clusters are certainly attractive and trendy, including LED brake lights – and the aforementioned twin chrome exhausts let cars behind know that this is no ordinary Fiesta but a hot-ish one. 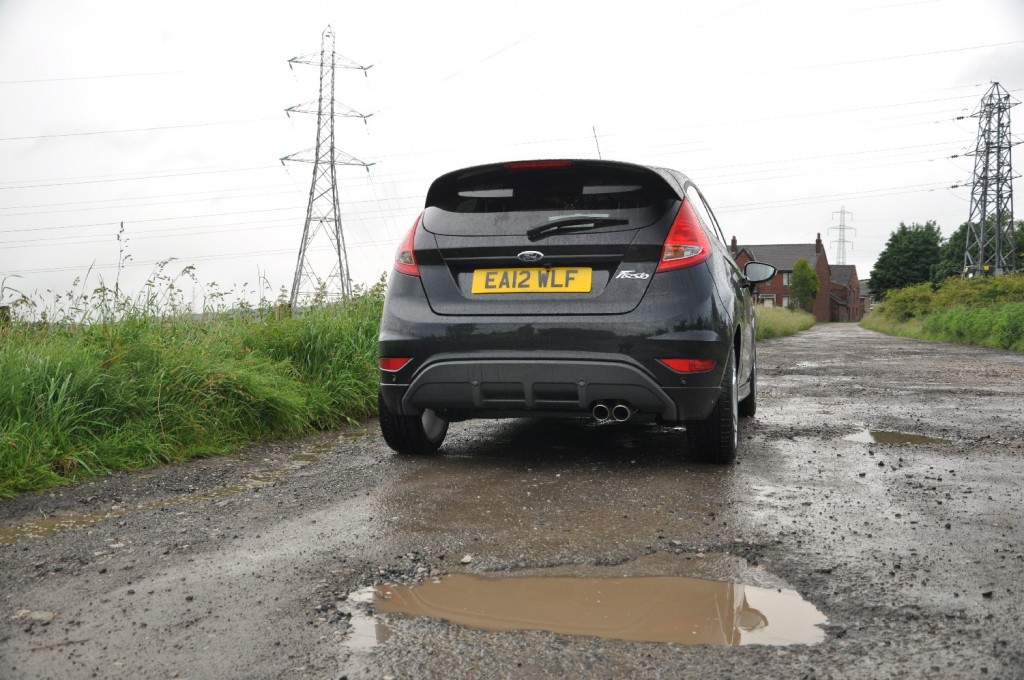 Inside the Fiesta Metal, everything really is rather nice. The first thing to catch my eye was the tasteful, elegant Ebony black leather sports-style seats with silver stitching. They looked fantastic and were very comfortable, but the side supports weren’t as cossetting as a Suzuki Swift Sport’s for example – so don’t expect to be hugged in quite as tightly around sharp corners.

The sporty edge to the Fiesta Metal is reinforced by the alloy aluminium pedals with non-slip rubber inserts, which proved very welcome during the abysmally wet week the Metal was in my custody. There’s also an attractive piano black finish to the centre stack, the air vent bezels and the door grabs. Other metallic-finish bits and pieces are dotted around the cabin, such as on the leather-trimmed gearstick, the handbrake and the 3-spoke steering wheel. The floor mats are finished off with silver piping and stainless steel scuff plates are integrated into the door sills. 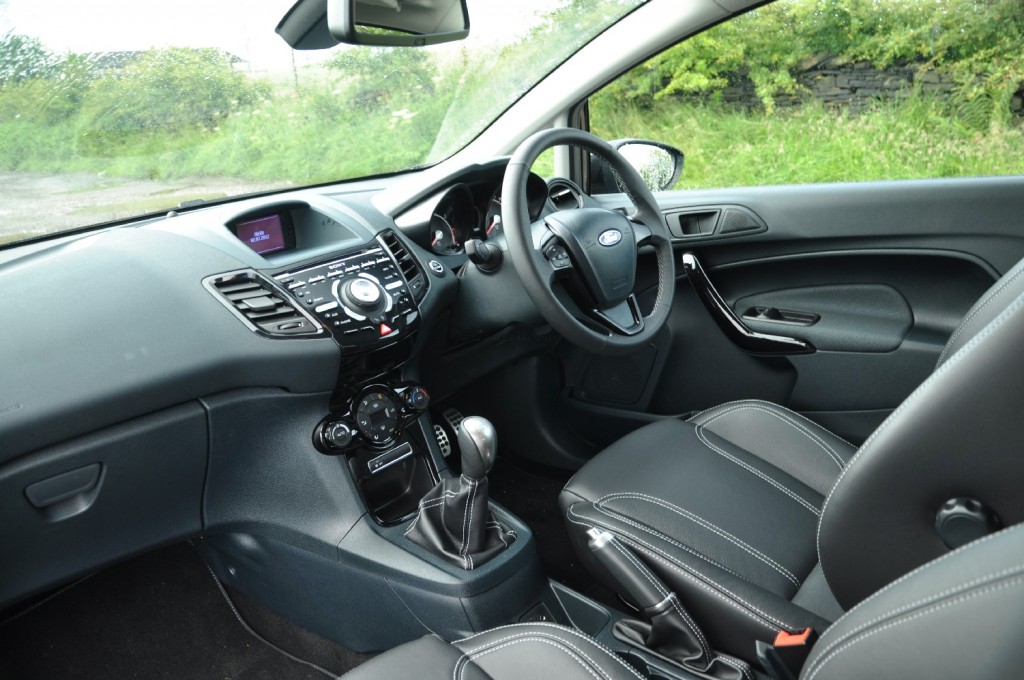 Keyless entry and start is a welcome feature, saving faffing around with keys, and everything feels very well put together in the Fiesta Metal. Okay, some of the plastics aren’t from the upper echelons of Ford’s parts bin, but they all feel sturdy, long-lasting and tactile.
Some may think the centre stack looks a bit of a fussy affair, emblazoned with hordes of little buttons and I actually found some of the rotary controls and other less-obvious buttons a bit tricky to master on the first attempt. It was worth persevering, though, as the sound quality from the Sony DAB digital radio and CD audio system was very good, and Bluetooth connected with no bother at all. 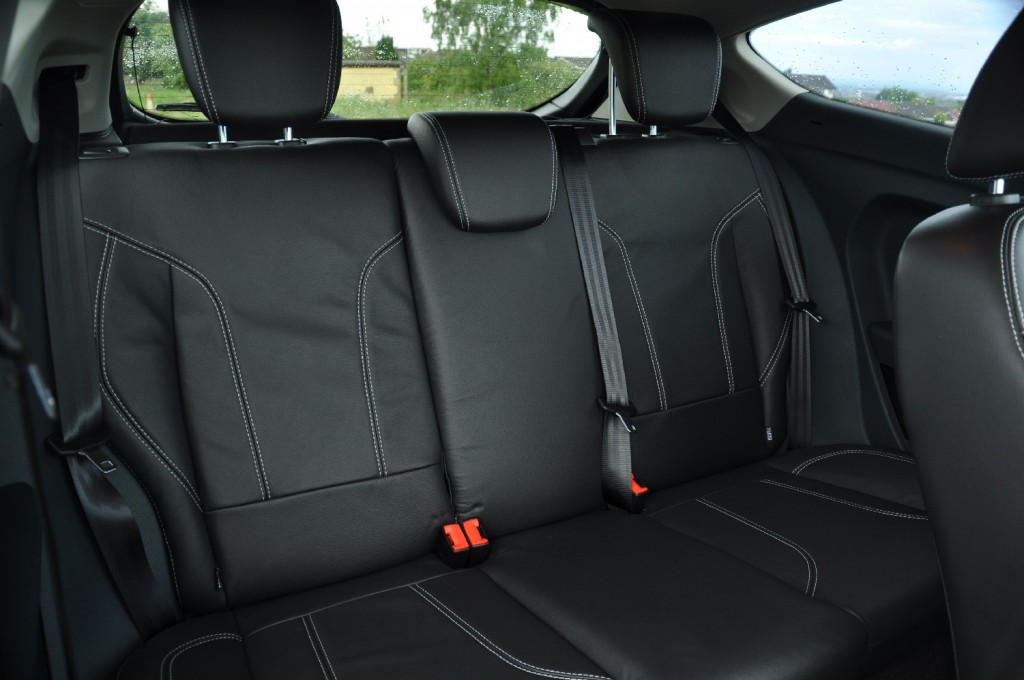 Before the Fiesta Metal came along, the Fiesta top dogs were the Zetec S and the limited edition S1600, which both had 118bhp in standard form. The Metal builds on the feisty 1.6-litre Zetec S/S1600 setup and brings 132bhp to the party, along with a close-ratio 5-speed gearbox, a reworked exhaust system and a new low-loss air intake configuration, to eke out as much power as possible. The Fiesta Metal was launched less than a year ago and Auto Express magazine impressively awarded it 7th place out of 30, in their hunt for the Performance Car of The Year 2011. 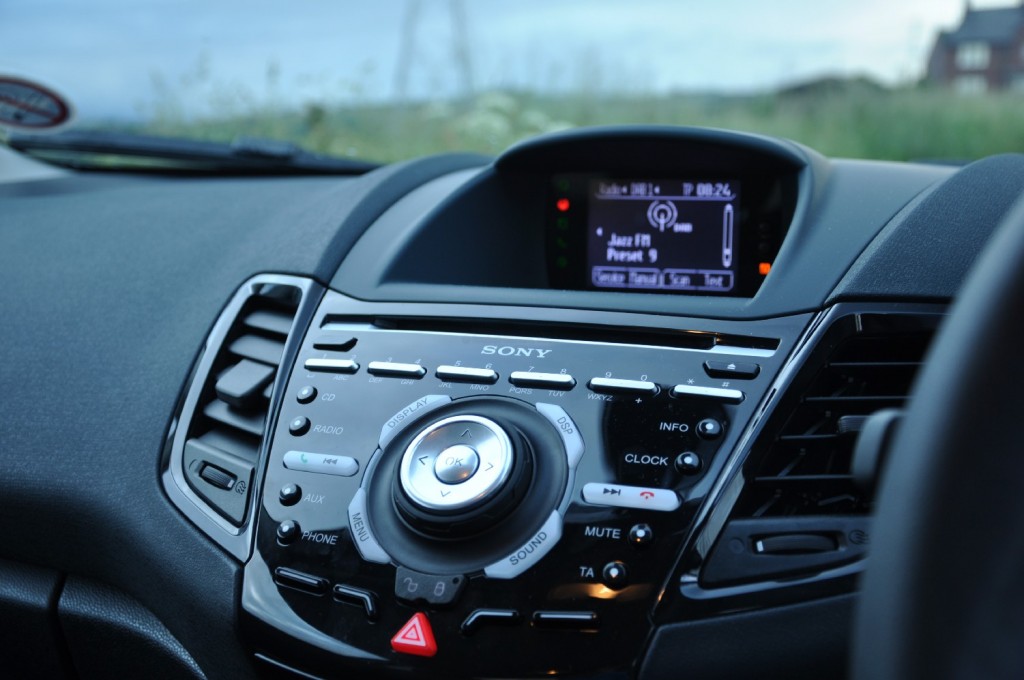 You already know I was impressed by its classy and well-built interior, but how did it perform on the road? The engine is refined and hushed if you’re gentle with your right foot, but push the Fiesta Metal hard and you’re in for a treat. One of the special little characteristics I loved about the Fiesta Metal was its exhaust note, which was surprisingly barky for a relatively modest and low-powered sports supermini like this. The Suzuki Swift Sport I drove last week had six gears, so it felt odd to me knowing that the Fiesta only had five – but having said that, it felt pretty refined on the motorway despite its lack of a sixth gear. 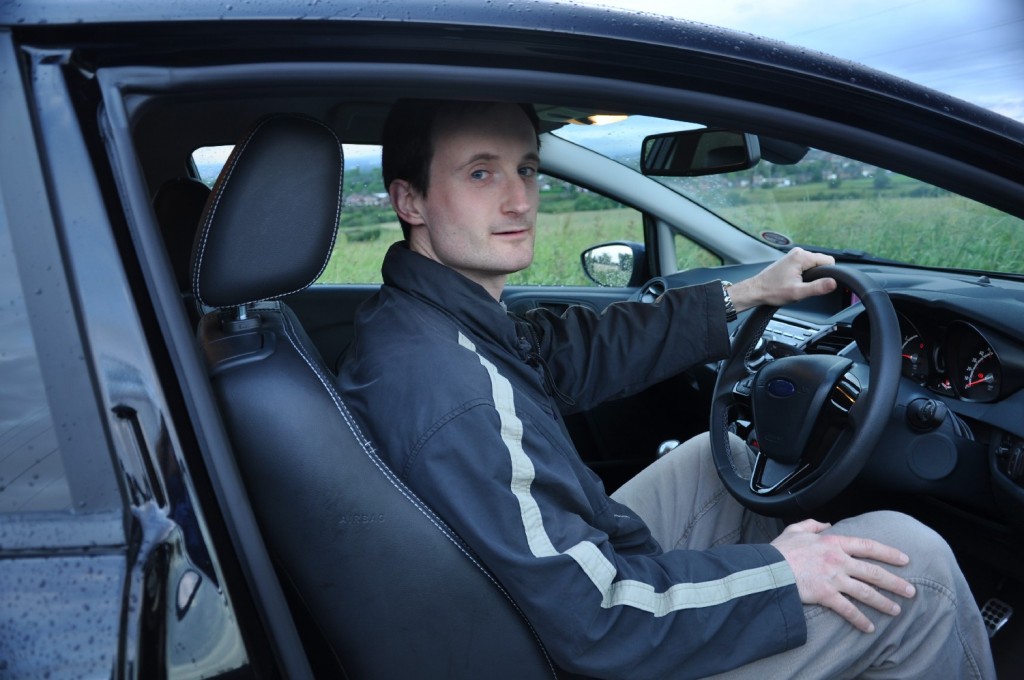 There was a fair bit of road noise at times, both at slow and fast speeds and especially over poor road surfaces, but despite the noise intrusion, the actual handling was very good indeed. The lowered sports suspension handled corners and uneven surfaces excellently, taking both in its stride. A car like this has got to be fun and the Fiesta certainly didn’t disappoint, its effective suspension, handling and nicely weighted steering contributing to its immense chuckability in corners. If driven with revs in mind, pushing it up into the 5-7,000RPM band when possible, the Fiesta Metal’s spritely, vocal little engine eggs the driver on, enhancing the engaging drive and resulting in punchy performance. Turn the wheel as sharply as you like and the Fiesta’s precise front end goes exactly where you point it, with very little body roll. The brakes, too, are nicely progressive once you get used to them.

A car for every day?

Whereas the Suzuki Swift Sport provided a good serving of sensations and smiles at low speeds even when one wasn’t particularly trying to induce them, the Fiesta Metal felt like it needed to be pushed hard to produce the same smiles. Perhaps it’s because the interior is so refined and polished. Whatever the case, it didn’t help the fuel economy. Ford quote 47.9MPG on the combined cycle. In the Suzuki Swift, I actually achieved its quoted figure, but not in the Fiesta Metal, averaging 37.5MPG. If you could stomach spending the £17,865 this particular car and spec would cost, whilst returning ten MPG less than the published figure, then you’ll like the Metal. Otherwise, perhaps look at one of the other models in the Fiesta range, offering a little less sporty behaviour but still presenting a refined, luxurious, feature-packed and great-handling package. 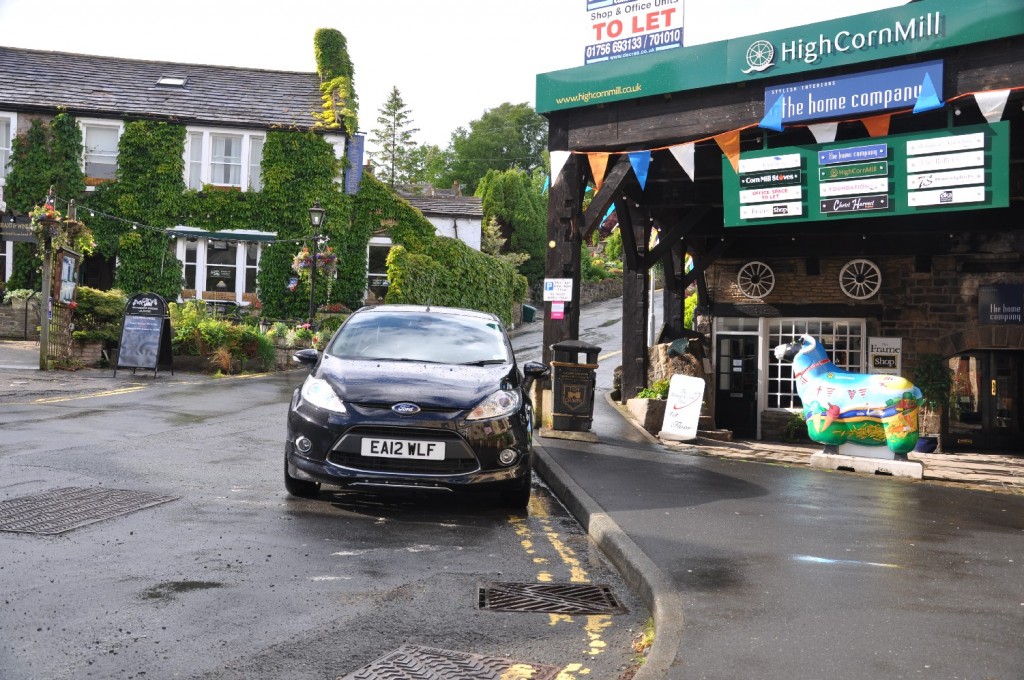 Up front, the Fiesta Metal 3-door was roomy and comfortable, but in the back, passengers struggled owing to the poor legroom. Unless Ronnie Corbett is driving, the Metal won’t prove great for long or even medium-length trips, but for short trips, it’ll do. The seatbelts for front occupants are situated quite far back, requiring a long, contorted stretch to grab hold of the buckle, and the long metal runner for the seatbelts spoils the car’s interior ever so slightly.

For such a highly-specified car jam-packed with all the latest features, it was odd to have to fold the wing mirrors manually. But having said that, the mirrors themselves were lovely and wide, with an attractive and aerodynamic design. Ford’s revered heated Quickclear windscreen did a brilliant job, too. The boot managed to swallow our weekly supermarket shopping, to my surprise, and the back seats split and fold (not perfectly flat, but not bad) to allow the carrying of larger loads. The metal strut left standing in the boot is a bit of an odd one, though, and could have been tidied up by the designers. Manoeuvring the Fiesta was easy due to its compact dimensions, but on full lock it felt like the track rod ends were iffy, and rear visibility could have been better – restricted somewhat by its raked rear-end design. So it was a saviour that Ford have fitted the Fiesta Metal with rear parking sensors and also a reversing camera, which is displayed on the rear view mirror. The last small car I drove which had a reversing camera display integrated into the rear view mirror was the Kia Soul – so well done to Ford for making this available in the Fiesta, albeit as a £475 option. 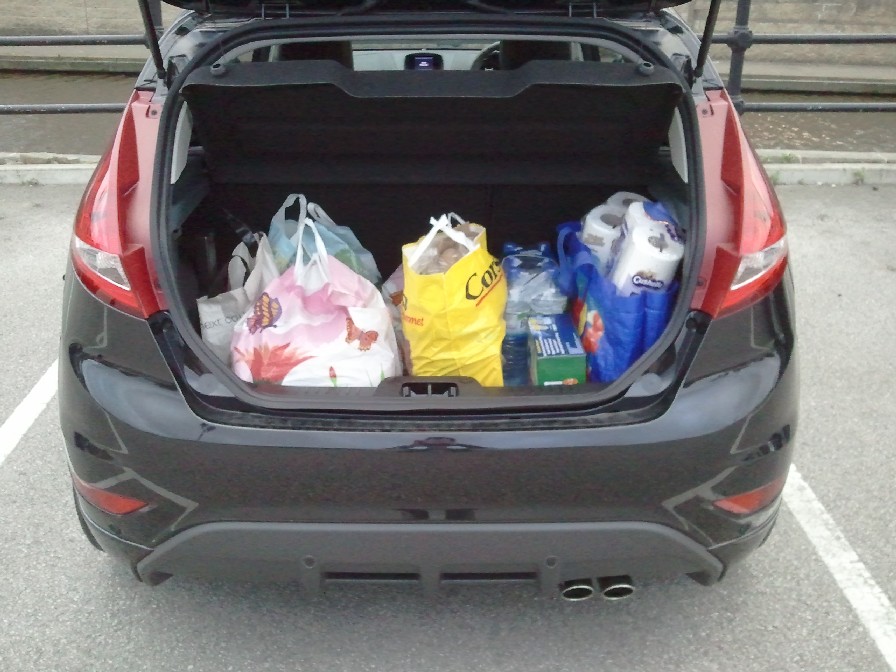 With a limited run of just 1,000 having been unleashed throughout the UK, the Fiesta Metal should prove fairly scarce if you’re into your exclusivity. It’s a few grand dearer than the Suzuki Swift Sport and RenaultSport Twingo Cup, which are very similar cars in terms of their headline figures. The Fiesta Metal may sometimes leave you feeling it’s slightly underpowered and you do need to drive it hard to get the best out of it. Nevertheless, it’s a remarkably agile car with crisp handling and a nice rorty exhaust note. Rear space isn’t brilliant, but it seldom is in small cars like this, and what the Fiesta Metal does bring to the party is a very decent dose of luxury and a strong equipment list, combing well with its sinister-but-smart appearance, resulting in quite a sophisticated warm supermini definitely worth test driving before you plump for one.